With my fifth week in Japan behind me, I am now half way through my internship. The weeks seem to fly by! As I reflect on the first half of my experience, I am amazed by how much I have learned in such a short amount of time. And the more I discover, the more questions I have. To some of you, this may sound extremely frustrating, but trust me- to a scientist it is the best feeling in the world! This past week I also got my first taste of intense summer heat.  Last weekend, the heat index was 105 degrees and the sun was out in full force! I decided to postpone my trip to Nagoya and I spent my weekend at nice, air-conditioned cafés reading up on topics related to my thesis instead. At one café, I even made friends with two older ladies who kindly invited me to sit with them. We chatted for a bit (in a mix of broken Japanese and English) and come to find out, one of the women had even visited New York and Arizona! Despite the language difference, our conversation went well and I enjoyed their company. It also motivated me to learn more Japanese so I can talk to and understand people better. Research-wise, this week was devoted to observing the rhesus and Japanese macaques.

Recently, I have been working with Sera, a primate technician, to observe some of the monkeys involved in our study. As a reminder, our project aims to test for the association between particular MAOA genotypes and social behavior, specifically aggression. To ensure that I remain unaware of which monkeys possess which genotype, Dr. Goto selected the group enclosures for us to observe and we were not given ID numbers for the monkeys. Each enclosure houses 5-7 monkeys, two groups are Japanese macaques and two groups are rhesus macaques.  Additionally, the rhesus groups are further classified as being of either Indian or Chinese origin.  Our week 1 observation goal was to allow the monkeys to habituate to our presence, so this week we simply watched them without collecting data. Next week, we will begin video recording the groups for focal animal sampling. Out of the four groups, three (the Indian rhesus and the two Japanese macaque groups) seem to have adjusted to us well. After two days, they paid little attention to us. The Chinese rhesus macaques are an entirely different story! They have been both aggressive and cautious of us all week. In their group, there are two males, 3 females, and a baby. Each time we observe them, one female and one male come out and inspect us from a distance. The others do the same when they are in the outdoor area in our view, but most of the time they remain in the back where they are out of sight, only stepping forward every few minutes to see if we are still around. I am intrigued by the initial behavioral differences I noticed between the Indian and Chinese rhesus macaques, though in order to determine if there are significant differences in social behavior, I must wait and see what our statistical tests reveal-stay tuned! Below are images of the macaque species we are using in our study. (not the actual monkeys at the PRI!) 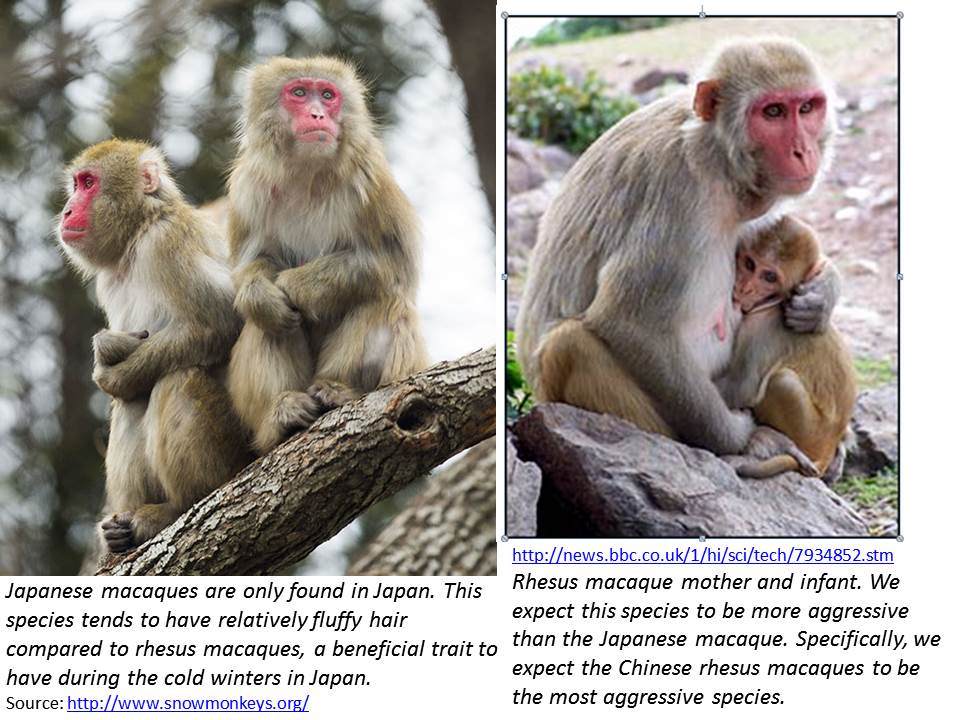