Hello there! And welcome to week five of my blog. It’s hard to believe that my time in Japan is already half over, but I’m looking forward to what the second half has in store.

This was my first full week back in the city of Kyoto, and while my data collection is, more or less, complete, there is still plenty of work to do. My research examines the effects of the Hox genes involved with limb development, and how they’re employed by the developing body both pre- and postnatally.  For example, during the early stages of limb development, different Hox genes control the distal growth of particular limb segments by influencing concentrations of fibroblast growth factors (FGF8 and FGF10) (Boulet & Capecchi 2004).  Later, Hox genes are associated with the development of growth plates in the long bones by designating cell polarity. If cells are not polarized, they cannot align properly, which is required for the orderly structure of a functioning growth plate (Boulet & Capecchi 2004).  Additionally, Reno et al. (2008) found Hox expression in murine limb buds to become more localized to the regions of the growth plates around embryonic day 15.5 (see image). Studies like these suggest a role for postnatal Hox control of bone growth. 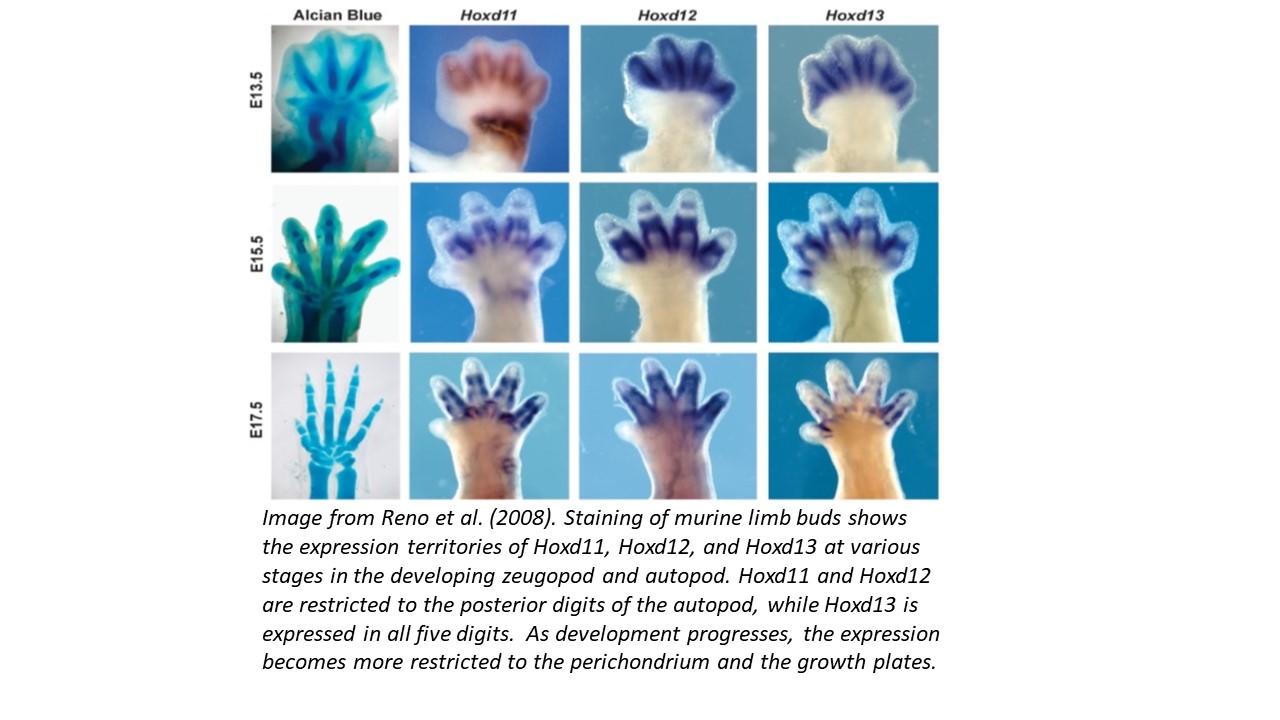 After analyzing the data I’ve collected, we’re hoping to find size correlations between limb elements within these Hox territories to verify that the genes play a role in postnatal limb patterning.

After work Wednesday, the graduate students in Dr. Nakatsukasa’s lab “took me out to the ball game”! 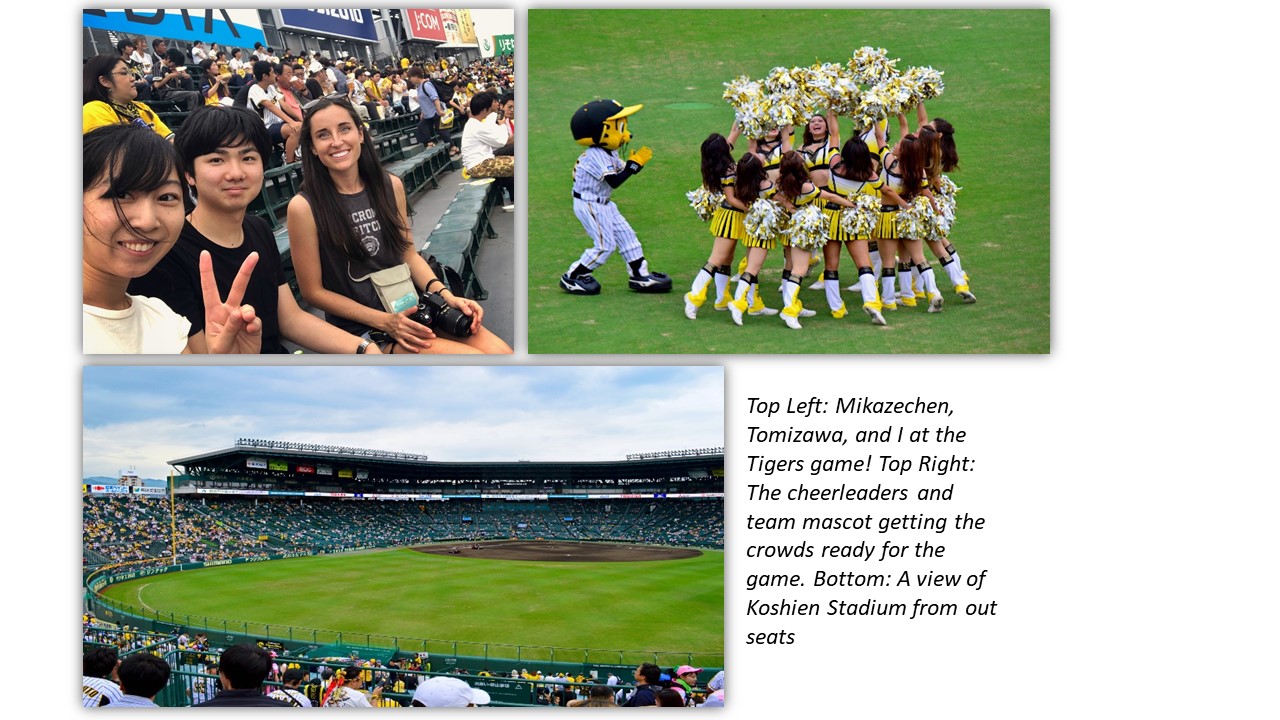 We went to Koshien Stadium, home of the Hanshin Tigers, where the Tigers met their longtime rivals, the Yomiuri Giants (often referred to as the “New York Yankees of Japan”). At first it seemed that being a spectator at a Japanese baseball game would be similar to the U.S. But that soon changed after the game started. I was excited to see everyone in the crowd joining in song and organized cheers throughout the entire game. They also had cheerleaders, which is not something you usually see at an

American baseball game. And of course, “game food” is very different in Japan. At home, we have cheeseburgers, nachos, soft pretzels, and, of course, hotdogs galore. But in Koshien Stadium, many fans had bento boxes (Japanese lunch boxes) with sea food, boiled eggs, vegetables, and onigiri (rice balls). The enthusiasm of the crowd was great and I had a blast! 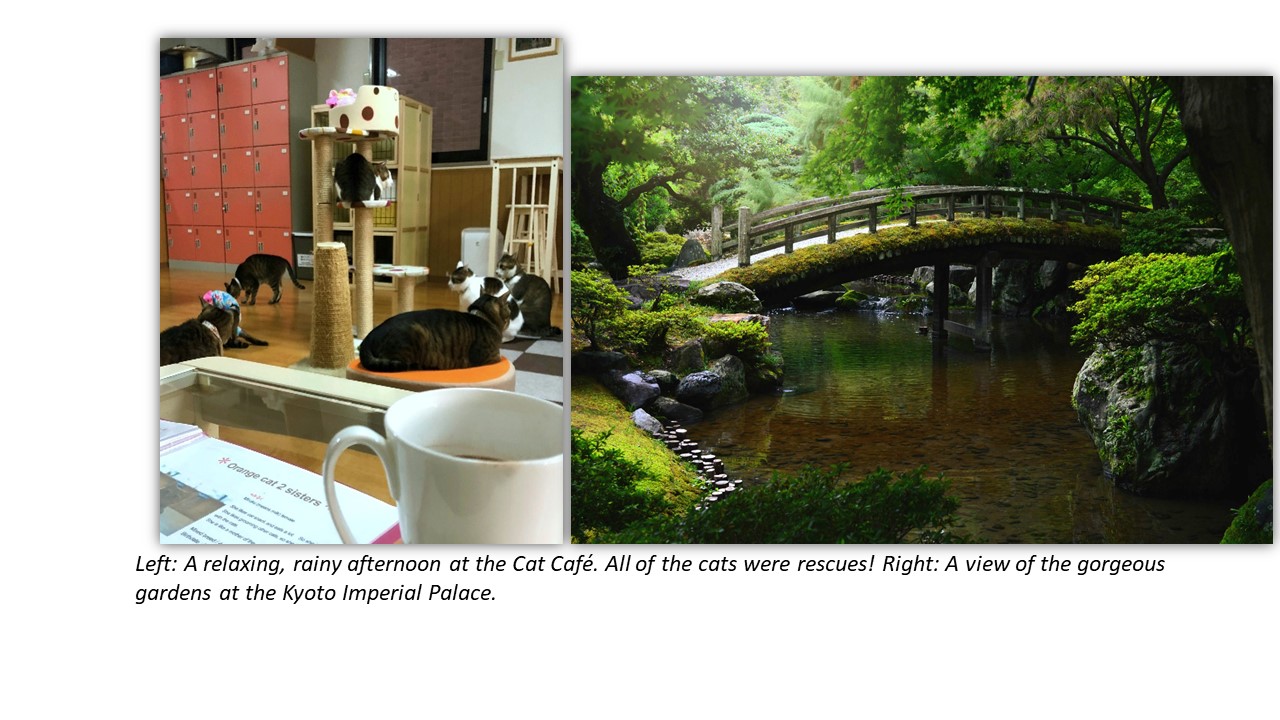 Last weekend the weather was rainy, so rather than visiting new temples and shrines, I spent a quiet afternoon in a local Cat Café. Here visitors can sip coffee or hot chocolate and play with a room full of rescued kitties.  On Sunday, Rose Leach (another Kent State graduate student in the JSPS program), traveled from Inuyama (near Nagoya) to Kyoto. On her first evening in town, we explored the Kyoto Imperial Palace – the former home of the Japanese Emperors, before they moved the capital to Tokyo in 1868. The architecture was stunning, and the gardens looked like something out of a fairy tale!