This past week I have gained a new sense of respect for scientists who carry out behavioral studies. I am learning just how tricky behavioral analysis can be. I know what you’re thinking: “how difficult could observing monkeys truly be?” Very difficult, I assure you! Here are the top five reasons behavioral studies, particularly involving monkeys, are not for the faint of heart:

1.Monkeys are difficult to tell apart from one another

In our study, we are using video footage to analyze behavior. Since the monkeys I have been recording live in social groups of 5 to 7 individuals, we have opted for an all-occurrence analysis method. This means that every time an interesting event takes place, we document the occurrence, with attention paid to which monkeys were involved. The problem is that many of the monkeys look very similar, especially on video!

2.Monkeys are fast and can be unpredictable

Aggressive behavior seems to be relatively infrequent in the groups I have been recording this week.  However, when it does occur, many times it seems to spring up out of nowhere! One moment, the monkeys are eating peacefully and then, monkey A gets too close to Monkey B and a quarrel plays out in lightning speed, resulting in the monkeys whizzing around the enclosure. This makes it difficult when using a video camera, as well as confusing when it comes to keeping the two monkeys straight. Yet, I am beginning to see patterns within the groups. Certain monkeys seem to be more prone to quarrelling with one another than with other group members. I don’t have an extensive background in primate behavior, but I am almost certain this has to do with the structure of the social hierarchy in each group.

3.It can take a VERY long time to complete behavioral analyses

In order to reveal significant differences in individual monkey behavior, you must analyze their behavior for many hours (hundreds!), be it via in-person observations or video recordings. I think the most difficult part about this is the time period in which your eyes are adjusting to the task of distinguishing and tracking. It can be wildly frustrating at first, but my advisor framed it in a way that made complete sense: it is just like stereology; your eyes need to learn the patterns. I remember sitting with my advisor and looking at brain sections under the microscope when I first started graduate school. All I saw were zillions of dots (cells) that all looked the same. Eventually, the layers appeared. I am optimistic the same clarity will come with practice as I continue my work with the monkeys.

Imagine analyzing hundreds of hours of monkey film and you find out there are no significant differences in behavior! This is essentially a scientist’s worst nightmare. It is always possible that the data won’t support your hypothesis, even if said data takes hundred of hours to compile. But the great thing about science is that even when this happens you have learned something. It would be exciting to discover associations between MAOA alleles and aggression, but it would also be exciting not to, because that means there is something else major waiting to be revealed about how this gene functions in the context of individual behavior.

5.You have to face the elements

And sometimes, these elements can include high humidity, direct sun, and 90+ degree temperatures. But, it’s all done in the name of science!

To take a break from my behavioral work, I took a shopping trip to Nagoya, which is a big city ~40 minutes from Inuyama by train. I wasn’t able to cover all of Nagoya in one day, but I did manage to go to a unique area called Osu. I also picked up some wonderful Japanese skin care products that I absolutely love! Below are some pictures from my day trip. I plan to go back to Nagoya to do some more exploring before I leave Japan. 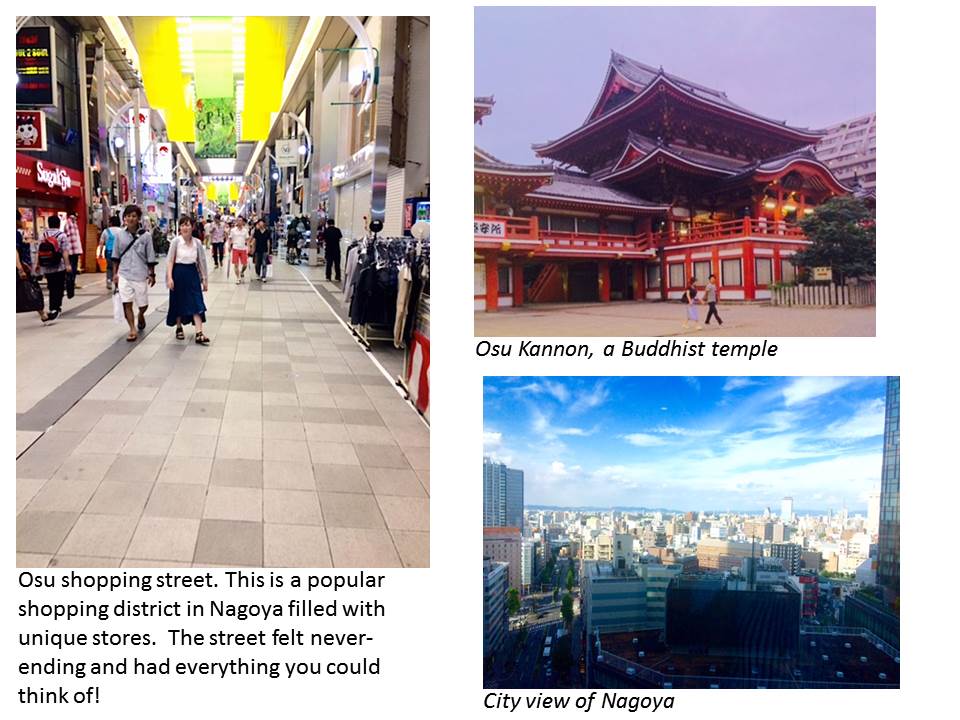