Week 7: Bone formation and growth, and a trip to Beppu

Konbanwa (good evening) from the PRI! This week marks the end of the data collection with completion of CT scans. In my previous post, I began to explain how long bones develop in Japanese macaques and how this information is important when determining growth from nutrient foramen measurements. This week, I am going to discuss the different modes of bone formation, growth at the epiphyseal plates, and how all of this factors into my project at the PRI.

There are two modes of bone formation, intramembranous and endochronal ossification. Ossification is the formation of bone material - the calcified, hard mineral matrix. During intramembranous ossification, cortical and trabecular bone develops directly from sheets of mesenchymal connective tissue. Flat facial bones, most of the cranial bones, and clavicles are formed using intramembranous ossification. This takes place in utero. Osteoblasts that are secreted around capillaries become trabecular bone, while osteoblasts on the surface of the spongy bone create a layer of compact bone, cortical bone. Cortical bone is surrounded by mesenchyme, which will form the periosteum, or protective covering around the osteoblasts forming the cortical bone. The blood vessels crowded by trabecular bone eventually condense into red blood marrow. 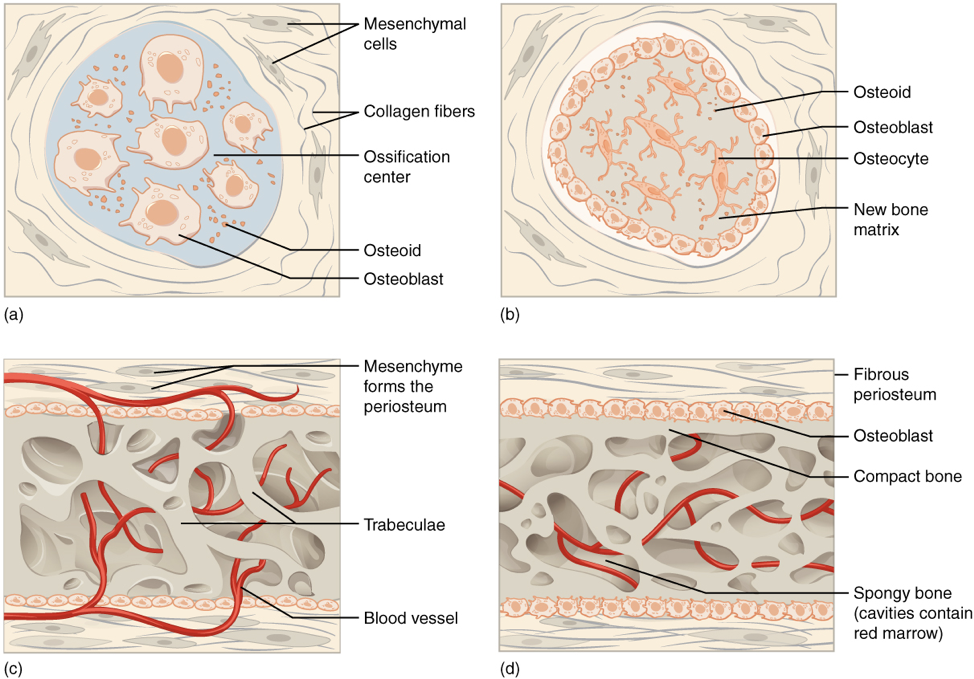 My research this summer is more focused on endochronal ossification, which is how long bones are formed. In endochronal ossification, the calcified bony matrix replaces hyaline cartilage. Cartilage does not differentiate into bone, it just forms a template. This process takes much longer and forms the long bones and bones at the base of the skull.

In long bones, around 6-8 weeks after fertilization, some mesenchymal cells differentiate into chondrocytes, which are cartilage cells. They create the skeletal form that is eventually replaced by bone. Soon after, the perichondrium appears (membrane that covers the cartilage). As matrix grows and begins to calcify, nutrients are cut off from the chondrocytes and they disintegrate. Blood vessels invade these spaces, both enlarging the area and depositing osteogenic cells that will eventually become osteoblasts. The enlarged spaces become the medullary cavity. Capillaries penetrate cartilage, inducing the shift of the perichondrium into periosteum, whose inner layer produces bone. Osteoblasts then form a periosteal collar of cortical bone around the cartilage of the diaphysis, where the primary ossification center is found. Remember from last week, the nutrient foramen is located at this primary ossification center because the nutrient artery passes through the foramen diving deep into the shaft of the long bone. The diagram below in (E) shows the nutrient artery feeding into the primary ossification center.

* Reserve Zone:  region closest to epiphyseal end and has small chondrocytes within the matrix. They don’t participate in bone growth but bind the plate to the osseous tissue of the epiphysis.

* Proliferative Zone:  next layer that contains stacks of larger chondrocytes that make new chondrocytes to replace those that die at the diaphyseal end.

* Zone of Maturation and Hypertrophy:  older and larger than the proliferative zone. Longitudinal bone growth is due to the cell division and maturation.

* Zone of Calcified Matrix:  zone closest to diaphysis is full of dead chondrocytes due to the calcification of the matrix around them. The capillaries penetrate this area, and osteoblasts in the same area secrete bone tissue on the remaining calcified cartilage. The bone grows in length when bone is added to the diaphysis. 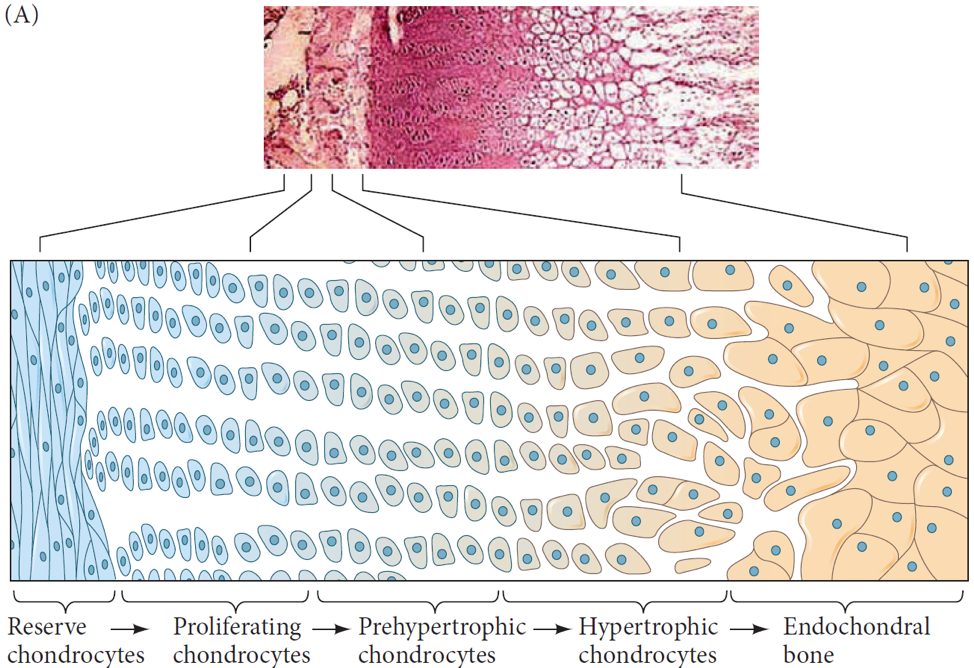 Bones continue to grow in length into early adulthood and cease when the epiphyseal plate ceases proliferation and bone completely replaces the cartilage. This growth is important to understand when trying to determine what biological processes might underlie the phenotypic plasticity of macaque mass and limb length in different environments. Next week, I will discuss a study that incorporates temperature and growth at the epiphyseal plate to help explain differences in growth patterns that could be applied to Japanese macaques.

Once the weekend arrived, I flew out Friday evening to Beppu, which is located on the island of Kyushu. Kyushu is southwest of Honshu (where Inuyama is located). Beppu is home to many onsen (hot springs) and Jigoku Meguri, also known as Hells of Beppu. There are seven “hells”, which are geothermal springs designated by the Japanese government as national scenic treasures. I spent Saturday morning hiking up Mt. Tsurumi, an active volcano that is the source for many of the onsen in Beppu. It was a grueling 2-hour hike to the summit with a little rock climbing involved. Luckily, there is a lift that takes visitors up and down the mountain on a 10-minute ride, so I took it back down! After returning from the top of Mt. Tsurumi, I visited each of the seven hells, which are all different colors and textures due to the mineral content of each spring. 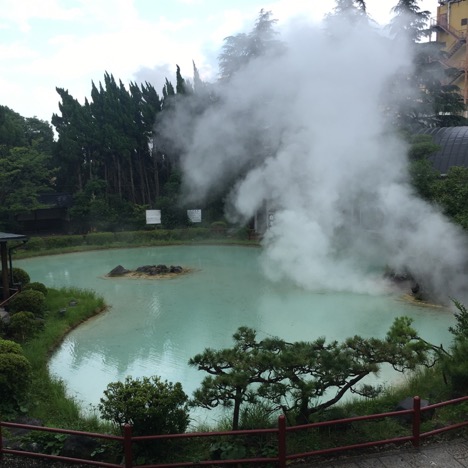 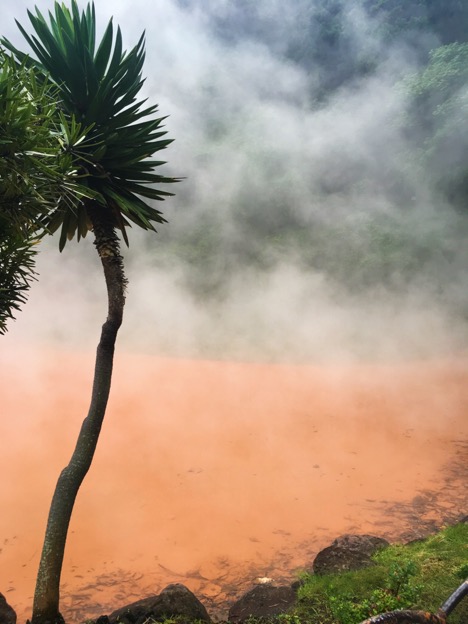 On Sunday, I spent the morning at Takasakiyama Natural Zoological Garden, home to over 1,200 wild Japanese macaques! The macaques here are markedly thinner in appearance, with longer limbs. It was a very hot day, so they were mostly lying around, napping and grooming each other. I cannot wait to see how the data from this region compares to the data from the other regions I visited! 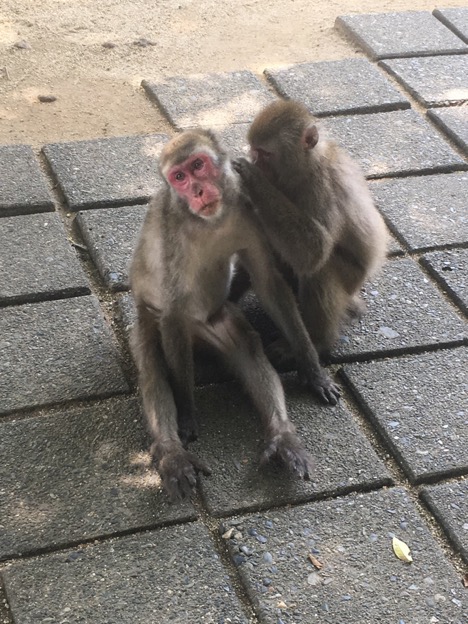 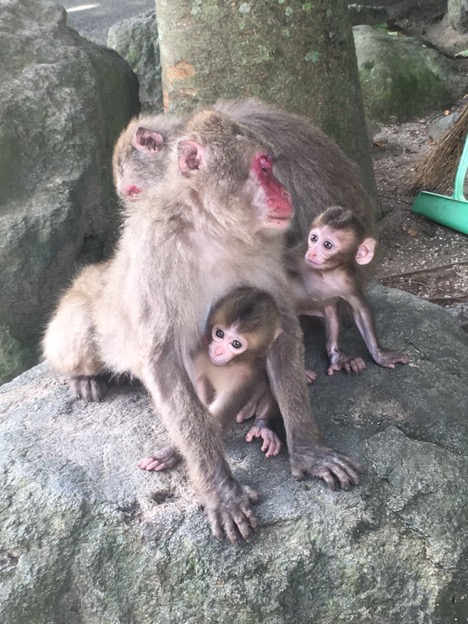 Until next time, sayonara!