Ohayou gozaimasu! (Good morning!) Now that data collection is over, it is time to work on data processing and statistical analyses. Last week, I described long bone development and growth. This week I will discuss the relationship between temperature and long bone growth, and how climate could affect Japanese macaque growth.

In a previous post, I referenced a study by Weaver and Ingram (1969) where the researchers raised pigs from the same litter at 5, 20, and 35 degrees Celsius. They found that pigs at the coldest temperature had shorter limbs and were stockier, with smaller ears and shorter tails, while those at warmer temperatures had longer limbs, were more slender, and had longer ears/tails (Weaver and Ingram 1969). They postulated that the warmer pigs were in a state of continual vasodilation, resulting in increased vascular supply to the bones, resulting in increased growth. They also suggested that smaller bodies in colder temperatures could be a result of the lack of available energy after needs for heat-regulation were met.

A graduate of Kent State University, Dr. Maria Serrat, and her colleagues developed three experiments to test the effects of temperature on long bone growth and the vascularity hypothesis developed by Weaver and Ingram. The first experiment was to test temperature and extremity growth by letting mice develop from weaning to maturity at 7, 21, and 27 degrees Celsius (Serrat et al. 2008). 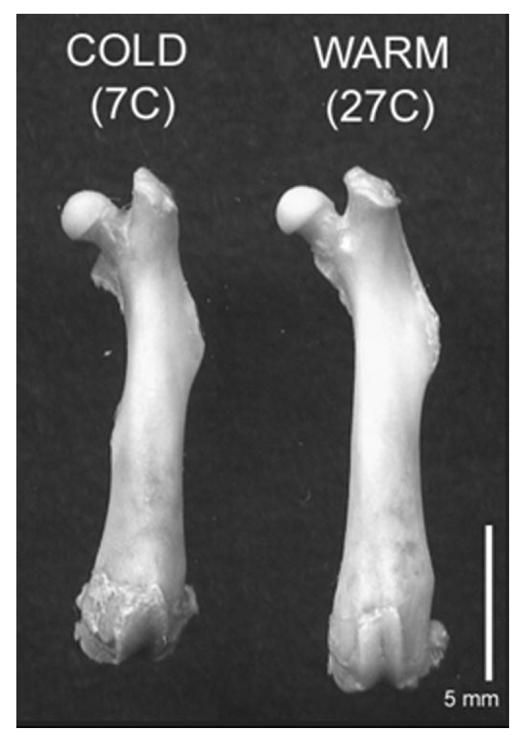 Ears, limbs, and tails of warm-reared mice were significantly longer than cold-reared mice, but there was no significant disparity in body mass (Serrat et al. 2008). There were differences in core organ size to account for the similarities in body mass (enlarged kidneys and heart), but differences in limb length could not be due to diet or activity level because cold mice ate more and were more active than the warm mice (Serrat et al. 2008). 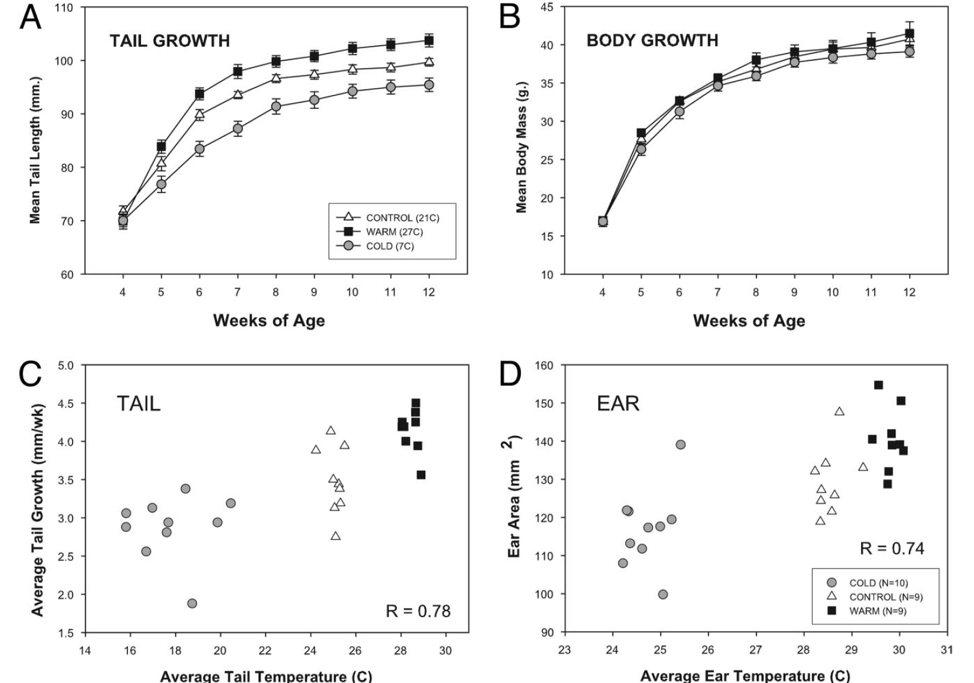 To determine if cold-induced reduction in skeletal blood supply affects shortening of the forelimbs, Serrat and colleagues looked at relative bone blood flow to the hind limb and tail base by using fluorescent microspheres to mark the blood (2008). When compared to the two warmer groups, the cold group had reduced blood flow in the femur, tibia, hind paw, and tail (Serrat et al. 2008). The results don’t fully support the vascularity hypothesis because highest growth rates were in the warmest climate mice and didn’t correspond to highest predicted blood flow, though it did match with the cold reared mice (Serrat et al. 2008). 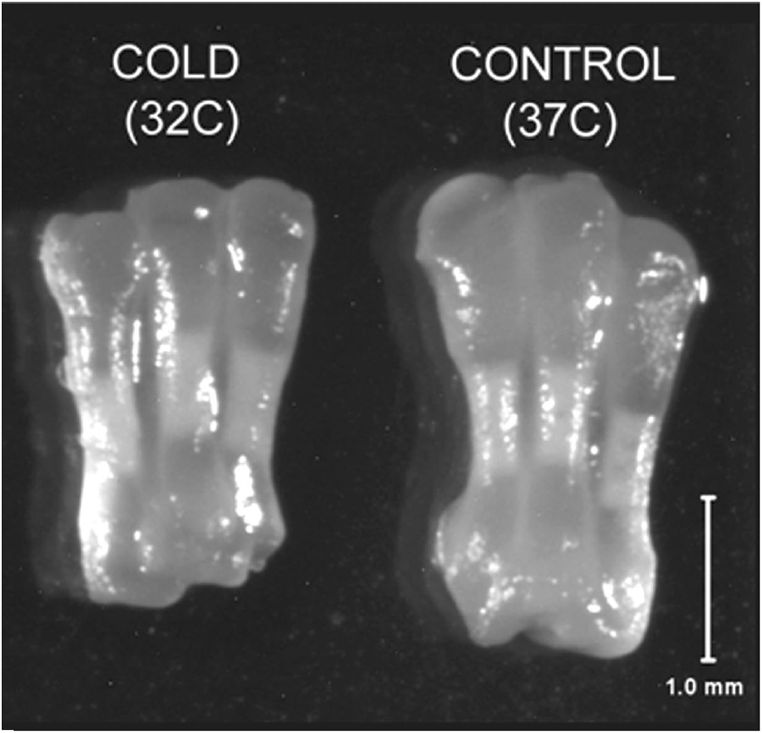 Finally, Serrat et al. (2008) tested the effect of temperature as a controlled independent variable on bone elongation/reduction. They used neonatal metatarsals in culture and grew them in different temperatures, with everything else constant. All increases in size occurred at the cartilage plates at the epiphyses but did not elongate under avascular conditions (Serrat et al. 2008). BrdU staining showed the higher rates of mitosis and greater chondrocytes in the warmer climate (Serrat et al. 2008). 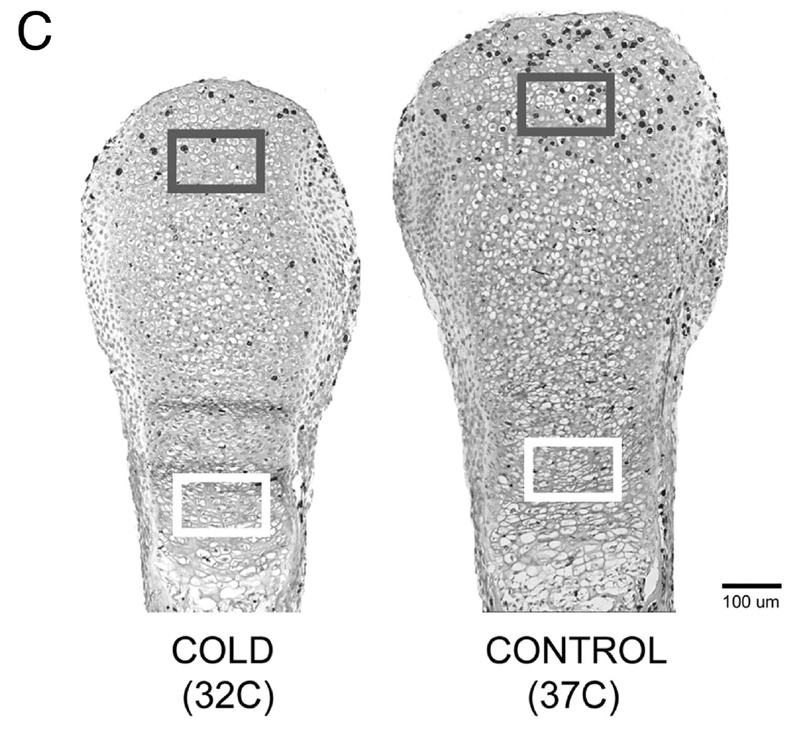 Figure: Increase in chondrocyte proliferation in cold vs control. The control has more dark stained cells. From Serrat et al. (2008).

Their study showed that changes in the blood vessels likely indirectly affects growth via tissue temperature, rather than directly affecting the delivery of nutrients to the bone (Serrat et al. 2008). This is one mechanism by which climate could affect limb length in Japanese macaques, and analysis of the data I collected at the Primate Research Institute will help elucidate whether clinal differences are a reflection of temperature gradients, or if this may be due to gene flow.

Now that I have had the opportunity (A big thank you to Dr. Nishimura for setting everything up!) to travel to three different regions and observe Japanese macaques in the wild, there does seem to be a noticeable difference in the phenotypes of the macaques. The macaques in Nagano prefecture are more robust, with shorter limbs, and thicker fur than their counterparts in Oita prefecture, who are thinner, with longer limbs, and shorter fur. Macaques in Kyoto seem to have more of a morphology like those in Nagano, but these specific monkeys are allowed to fed by visitors, which may influence their phenotype. Look at the photos below for comparison: 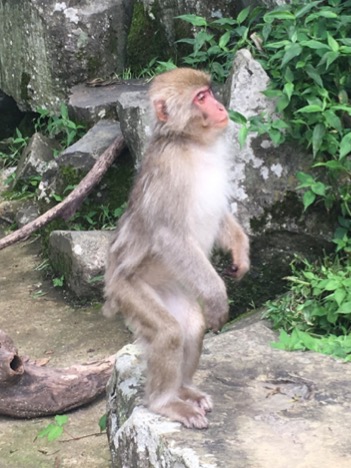 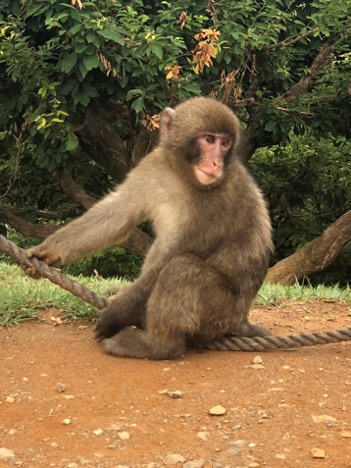 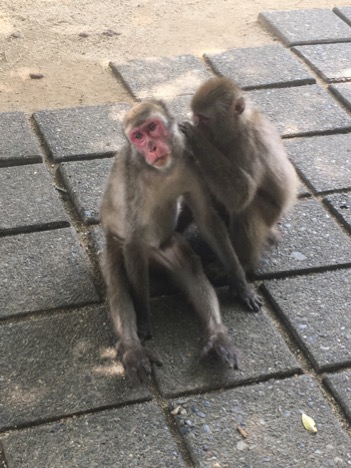 Left to right: Macaques from Nagano, Kyoto, and Oita prefectures.

Dr. Nishimura was very kind and set up an opportunity for me to meet Dr. Gen Suwa at University of Tokyo to have lunch and see the collections housed the university museum. Dr. Suwa and Dr. Owen Lovejoy (my advisor at Kent State University) collaborated together numerous times while working on Ardipithecus ramidus. Both Heather Lawrentz (another Kent State student) and I visited Dr. Suwa, who took us out for tempura, and showed us some of the collections housed at the University of Tokyo, which include casts of Ardipithecus material that were made from the original specimens, and an anthropological collection from the Jomon period (~14,000 – 300 BCE) of Japan. I would like to thank Dr. Suwa for taking time out of his busy schedule to host us at the University of Tokyo!

Over the weekend, I traveled to Sapporo, on the island of Hokkaido, to enjoy the cooler weather with friends. We enjoyed dangling our feet in the Ishikari River, which was icy cold and perfect on a hot summer day! Saturday was spent exploring the little town of Otaru, which has a cute canal with gondola rides. 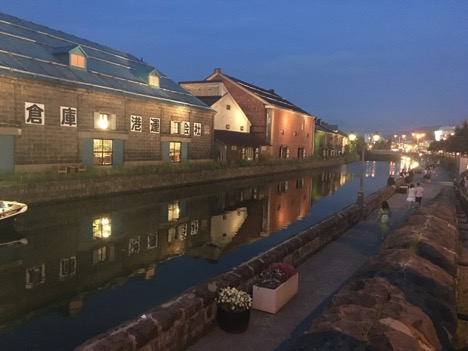 On Sunday, I went to the Shiroi Koibito Park, home to the Ishiya Chocolate Factory. At the chocolate factory, you can see how various confections are made, including the famous Hokkaido omiyage (souvenir) called Shiroi Koibito. Shiroi Koibito directly translates to “white lovers”, and is based on a remark by the founder after a day of skiing, who said, “It has started snowing white lovers”. It is a small confection made with white chocolate sandwiched between two square shaped buttery cookies. At the adjacent museum, I had the chance to try a fresh one, which was oishii! (delicious!). 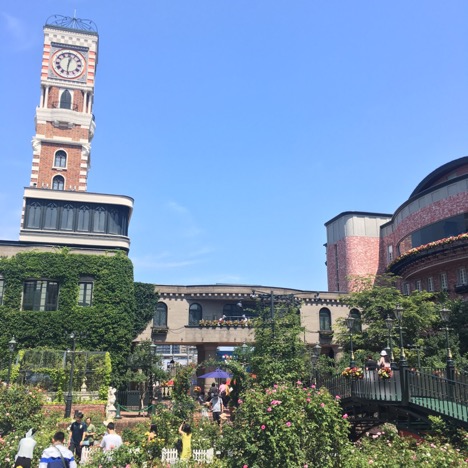 Afterwards, I wandered around the gardens and enjoyed both the famous Hokkaido soft serve ice cream and a white chocolate ganache tart. Needless to say, I was in a sweets paradise! It was the perfect ending to the week. Stay tuned next week to hear more about my research and cultural experiences in Japan, with only two weeks left! 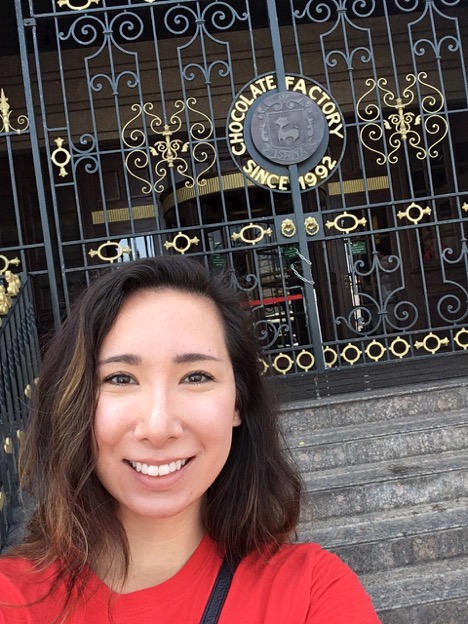 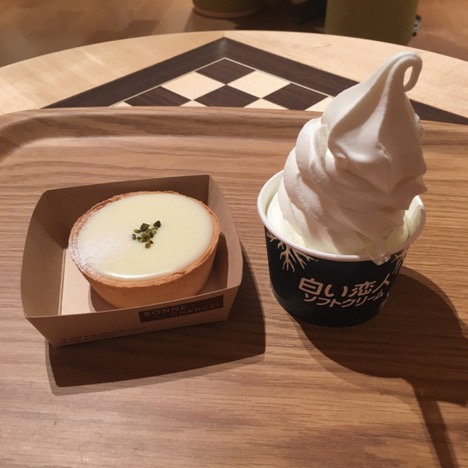 Left: Me, in front of the Ishiya Chocolate Factory. 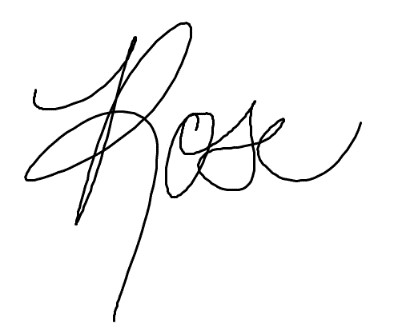