Week 9: A return to Inuyama

Hello there, and welcome to week 9 of my blog. This week I traveled from Kyoto back to the Primate Research Institute in Inuyama for a second round of data collection.  I am very grateful to Dr. Hirasaki and staff at the PRI for welcoming me back another week, for with any project, there’s always more data to be collected! Although I had previously focused my efforts on the Ateles and Colobus specimens housed at the PRI, it’s good to have comparative data from other species to provide a broader framework for anatomical analyses. Over the three weeks I spent with the collections, I obtained a total of 6,300 forelimb and hind limb measures from over 120 individuals, including a few extra measures from primates as large as orangutans and as small as squirrel monkeys. 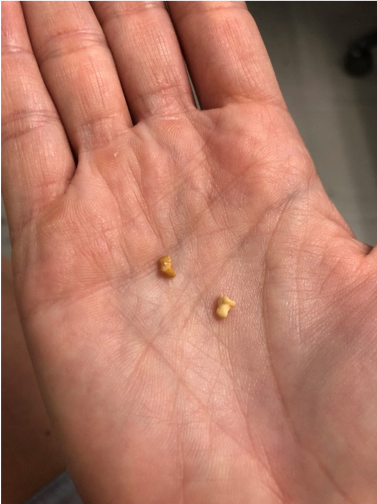 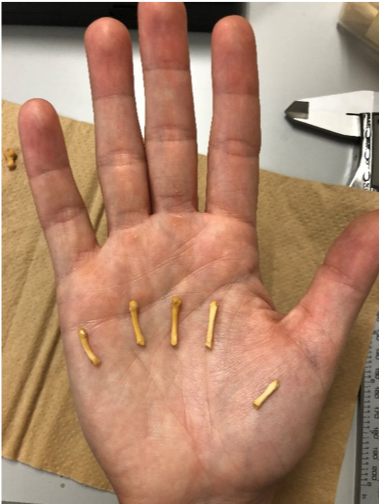 Photos: Carpals (left) and metacarpals (right) of Saimiri sciureus, a squirrel monkey. Before I measure elements of the skeleton, I first have to reconstruct parts of it. It's like putting together a very small, yet complex, puzzle!

An important aspect of my research that I would like to discuss this week is the nutrient foramen. Before a bone becomes a bone, it first exists as a cartilage anlage, or model of the bone to be. The process of ossification begins when the first artery pierces the center of the shaft of the developing cartilage anlage. This artery transports elements needed to begin the process of calcification, and thus, the point of entry is called the ‘nutrient foramen’. Ossification and growth occur outward from that point. After the primary and secondary centers of ossification have been established, and the majority of the bone has become ossified, a thin layer of cartilage remains at the proximal and distal ends of most long bones. These regions are the epiphyseal plates, or the growth plates. Any subsequent longitudinal growth occurs in these areas. However, growth does not proceed equally in both directions. Therefore, in an adult bone, a measurement from the nutrient foramen to either the proximal or distal end of the long bone will reveal how much growth has occurred in either direction. This is important to the current study because it is hypothesized that Hoxd11 influences, in particular, the distal growth of the zeugopod. Hence, by measuring from the ulnar and radial nutrient foramina to the distal ends of the bones, and comparing these measures to the lengths/weights of the metacarpals, we can hopefully ascertain the boundaries of Hoxd11 expression and understand it’s influence on particular limb segments.

The humeral nutrient foramen of Alouatta seniculus, a howler monkey, is pictured in the image below. An interesting observation I have made while collecting data is, as you can see in the picture indicated by the red lines, the nutrient foramina are not always in the same place on both the right and left bones.  I am still investigating how and why this happens, and also whether or not it will have an effect on the results of the present study. A few millimeters may not be a significant difference in a humerus as large as one belonging to a howler monkey, but what are the statistical effects of this difference in, say, something as small as Saimiri sciureus? 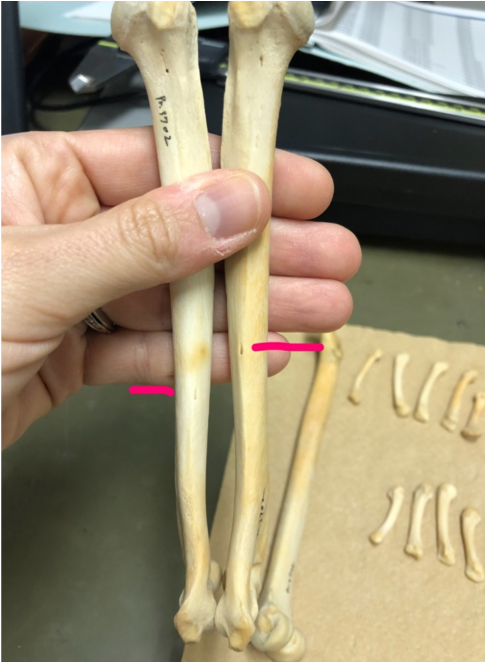 Stay tuned as I wrap up the last week of my studies in Japan!