Kent State University’s Cleveland Urban Design Collaborative took 18 graduate students to Akron for an intensive three-day design workshop or charrette. The students are getting their master’s in architecture, urban design and landscape architecture. Also participating in the workshop were students from Cleveland State University’s Master of Urban Planning and Development program, six students and faculty from Lawrence Tech University in Detroit and alumni of Kent State’s Cleveland Urban Design Collaborative. 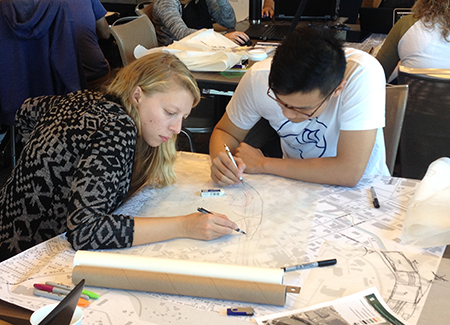 The charrette examined Akron’s Innerbelt Removal site, the northern section of Highway 59 directly adjacent to Akron’s downtown. Students, staff and faculty formed four interdisciplinary teams to each produce a vision for the redevelopment of the site once it closes to vehicular traffic in the next year. They were charged with examining the current Innerbelt site and its linkages to the downtown, surrounding neighborhoods and larger region, in order to determine program, density, infrastructure and character of new development and green space.

Participants were tasked with finding solutions to how a piece of highway previously perceived as a barrier can be transformed into a meaningful connector, a piece of cohesive urban fabric and a place in its own right.

To tackle this complex and rich design problem, students first took tours of the site area with City of Akron Planning Director Jason Segedy; presented preliminary research to a room of local stakeholders, who gave their own advice and feedback; and then got to work producing site analysis and redevelopment concepts. After 48 hours, they presented four schemes to community stakeholders.

The charrette was recently featured in the Akron Beacon Journal.