The SAGE Project is a new awards program honoring female students taking control of their education and Kent State experiences, according to the Women’s Center website. The program was piloted last year, but this is its first year of implementation, says Alicia Robinson, program coordinator for the Women’s Center at Kent State. 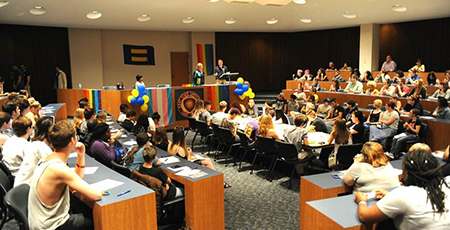 “Faculty and staff can nominate students who demonstrate leadership and have overcome a lot of obstacles,” Robinson says.

Any woman who is a full-time graduate or undergraduate student in good academic standing is eligible for nomination. Faculty and staff can nominate a student here or email the Women’s Center at wc@kent.edu with their nomination.

Robinson also serves as the program coordinator for the LGBTQ Student Center. This fall, the center introduced Threads, a new organization for LGBTQ students of color.

“Threads is an organization where people share cultural similarities, as well as LGBTQ experiences,” says Gabrielle Cooper, a Kent State junior human development and family studies major and president of Threads. “The executive board and faculty members involved with Threads want this to be a safe space where people can socialize and be educated on subjects that apply to them.”

“We’ve done a lot of educating,” Robinson says. “We’ve helped students understand terms and what words are acceptable and which ones aren’t. The group has also helped students struggling to come out to their parents, and other topics relevant to their experience.”

“It was really encouraging,” Ditlevson says. “We had multiple coaches from football, basketball, softball and wrestling. They all want to do more. They want to do a student component for their teams.”