Mark Your Calendar for the 2016 International Cook-Off Competition

The Cook-Off is scheduled for Thursday, Nov. 17 from 6:30 to 8:30 pm in the Kent Student Center Ballroom. Hosted by the Office of Global Education along with Kent State Dining Services, the Cook-Off features food and beverages from around the world. The event is free and open to all.

Six student culinary teams – from Bangladesh, Brazil, India, Nepal, Saudi Arabia and South Korea – have been selected to compete and will each prepare and present a different cultural entrée and beverage from its home country. The teams will compete for first, second and third place awards, which will be determined by a team of judges. In addition, the Cook-Off’s attendees will have the chance to vote for their favorite for the People’s Choice Award. The first place team will also have the chance to have its entrée featured in Kent Market 2.

"I am looking forward with tremendous excitement to participating in the International Cook-Off and continuing the wonderful number of experiences throughout International Education Week at Kent State University," says Justin Hilton, the emcee for the Cook-Off. "To be in the presence of amazing KSU students, tantalizing food offerings from around the world, and a lively fun and festive event, is a priceless gift that I will cherish until next year."

The team of judges for this year's International Cook-off include Jim Bracken, Dean of the University Libraries, Charles Taylor, Dean of the College of Pharmacy at the Northeast Ohio Medical University (NEOMED) and Kathy Spicer, Outreach Program Manager for the Provost's Office.

For the first time, technology will have a role in the voting for the People's Choice Award. Attendees will have the opportunity to send a text message with their cell phones to vote for their favorite cooking team. The texting will replace paper ballots making it more convenient for the attendees to vote and for the judges to tabulate the results.

Last year's Cook-Off featured cooking teams representing Sri Lanka, Oman, China, India, Brazil and Vietnam, while a crowd of about 500 Kent State students, faculty and staff were on hand to sample the exotic foods which the teams had prepared. With a dish of fried rice and fish balls and a refreshing fruit punch, Sri Lanka was selected by the judges for First Place while the audience voted for Oman for the People's Choice Award.

For a "taste" of the food and festivities planned for this year's Cook-Off, watch the following video featuring last year's competition. Then save the date and plan to attend. Your taste buds will thank you. 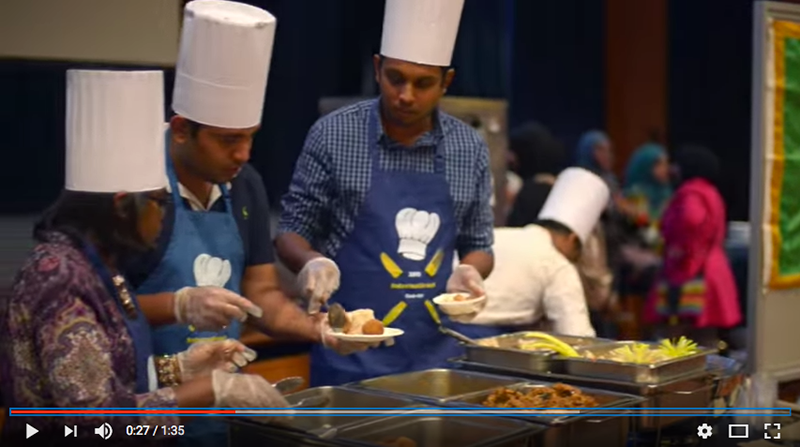