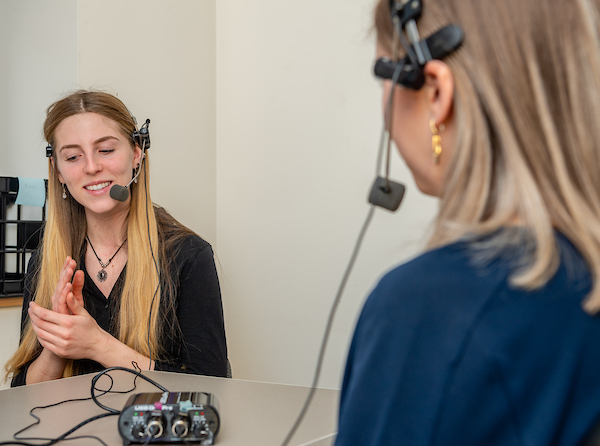 Kent State University psychology professor John Gunstad, Ph.D., received a grant of nearly $2.6 million from the National Institutes of Health to expand his Alzheimer’s disease research into a national study.

Gunstad is studying how speech patterns in older adults can be used as an early detector of Alzheimer’s, the progressive neurological disorder that is the leading cause of dementia in the elderly. Alzheimer’s causes changes in the brain before symptoms appear.

Gunstad’s research began last year, through Kent State’s Brain Health Research Institute and its partnership with the Cleveland Brain Health Institute, which provided a $40,000 grant for the initial study of 60 individuals.

With the new NIH grant, Gunstad will partner with researchers at Columbia University in New York, to collect the same speech pattern data from a pool of nearly 3,000 people, whose health is already being studied by Columbia.

“Essentially, our study will piggyback on their ongoing research which will give us a much larger data set," he explained.

The idea for Gunstad’s research blossomed from existing work by IBM using new technology to study changes in speech patterns in patients with psychosis or schizophrenia, to determine who were at the highest risk for future hospitalization.

The technology records the test subjects in conversation, then assigns codes to different words and parts of speech, which are then analyzed for speech patterns that can predict problems in the future.

The tests are ongoing in patients ages 55 to 90.

“We wanted to cast a wide net to catch people across a wide continuum,” Gunstad said. “Changes in speech patterns can be detected very early on.”

The new NIH-funded research is expected to take four years, during which time the local study will continue.

“We’ll be adding a new piece to a giant project,” Gunstad said. “The sample is very diverse.”

While there are variants of the disease which can strike the young, most Alzheimer’s begins after age 65, Gunstad explained. If changes in speech patterns can help to determine the onset of Alzheimer’s at an early age, treatment can start earlier when it is more effective.

“That’s one of the reasons I am excited about this line of research,” he said. “Individuals often come in very late in the process. Their condition is more advanced by the time they come in for treatment.”