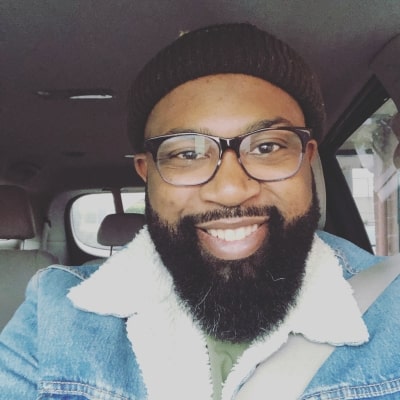 As a Design Researcher at Premera Blue Cross, Jeremy focuses on finding the gaps between business and the user. His team at Premera Blue Cross works as an internal consultancy. Other departments in the company come to his team with questions and Jeremy and his team devise the best methods and techniques to help answer those questions. These methods include conducting intercept surveys and observing how customer service representatives perform their jobs.

"Social capital is your friend. It is a little different now in the pandemic, but do whatever you can, even if that means reaching out to random people you admire on LinkedIn."

Jeremy found all of his courses in the program helpful. “When I was going through the program, all of the classes had a research component to them,” Jeremy says. “That is why I chose to focus on research in my career because I really enjoyed understanding behavior and using that to drive design and business decisions.” He thinks that the most important skills in UXD are the soft skills, which are hard to simulate in an academic setting. He thinks that having a research-based mindset is another important quality of a UXD professional.

Jeremy did a paid internship at Zillow as the company’s first ever UX research intern. He found this opportunity through networking at tech and UX events. During his internship, he collaborated with project managers, designers, and engineers to plan and conduct user studies. His methodologies included concept studies, user interviews, remote moderated studies, card sorts, ethnographic studies, and diary studies. He also served as the UX research lead for the Home Display Page Team and the Mobile Apps Team.

In 2017, Jeremy was a member of the team that won first prize in VR at the AT&T AR/VR Hackathon in Seattle. He wasn’t familiar with designing or conducting research for augmented reality or virtual reality, but he wanted to learn more about these emerging technologies. During the weekend hackathon, Jeremy and his team created an asynchronous VR game where one person was in the VR headset and the other was on the PC. One user was big and the other was small; the big user had to use the small user to solve puzzles to escape rooms.

Jeremy felt a lot of uncertainty during his job search, especially at the beginning of the pandemic. “Trying to find a job in a pandemic is tough because even jobs that were open went away if they were not filled,” he says. However, Jeremy notes one positive aspect is that companies have broadened their search for candidates since they are now more comfortable with remote work.

Jeremy is open to connecting with current iSchool students via LinkedIn and Twitter at @jwill7378. He is also willing to set up video chat Q&As with interested students.