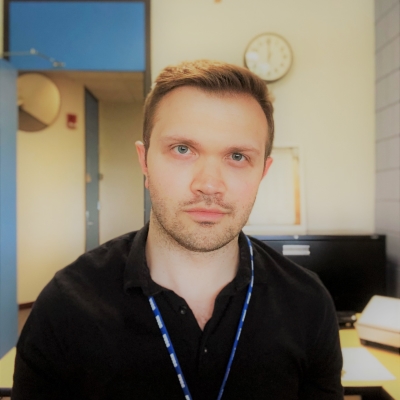 Travis has worked in Connecticut libraries for about 10 years. He began his career as a Teen Services Assistant at Coventry’s Booth & Dimock Memorial Library. He then worked as a Reference Librarian at the Farmington Libraries before becoming the Head of Technical Services for the West Haven Public Library system.

Now, Travis serves as the Systems Librarian at Naugatuck Valley Community College in Connecticut where he oversees the Technical Services department. He is responsible for maintaining the integrated library system and updating the library’s website. He uses library technology to create new resources for students, such as digital collections, and provides direct reference and instruction services to students and faculty. Travis also is involved in campus committees, like the Curriculum and Educational Affairs Committee, and four consortium-wide teams with colleagues from colleges and universities across Connecticut.

"Being willing to try something new is also a great way to discover what aspects of librarianship you'd really like to focus on later in your career."

Travis is grateful for the education and experiences he had while pursuing his MLIS at Kent State. “I had the opportunity to meet some absolutely amazing faculty and fellow students, even though I completed my program completely online,” he says. One of the most memorable courses he took was Cultural Heritage Informatics with Professor Zeng. This course gave him the opportunity to view his degree and potential future career from a new perspective. Another course he found helpful for his career, especially recently, was a copyright law course. Travis referred to his textbook from the class while working on controlled digital lending practices during the pandemic.

He has been involved in the Connecticut Library Association (CLA) for several years and was recently named Vice President/President-Elect of the association. Travis previously served as a regional representative on the CLA board for two years, acting as a liaison to a region of about 35 towns and cities primarily in northwestern Connecticut. He also is an active member of CLA’s LGBTQ+ Section. “CLA has given me the opportunity to meet and work with so many fantastic people who I would not have met otherwise,” Travis says. “I can't stress enough how important it is for students to take advantage of the networking opportunities professional organizations provide.”

He recently received a Merit Award for Exemplary Service to Naugatuck Valley Community College in recognition of his efforts to support students during the pandemic. Earlier in his career, Travis received the D. Newton Barney Society Award from the Farmington Libraries in Farmington, Connecticut. He is excited to be part of a statewide reading initiative that the Connecticut State Library will be rolling out in 2022. While at the iSchool, he completed a research project which explored the process of digitizing local history materials in a public library's archive.

One of Travis’ biggest challenges during his career has been self-doubt. “You will most likely encounter critics at some point in your career, and while sometimes you may receive valuable feedback, other times you'll find that someone may be projecting their own inadequacies onto you,” he says. “Learning to distinguish between advice you can use and abuse you should avoid can be difficult, and that's why it's so important to have someone to help you navigate.” Travis is thankful for mentors, like Professor Zeng and Library Director Jay Johnston, who have been instrumental in helping him deal with challenges.

Travis encourages iSchool students to stay in touch with faculty members. “There are so many brilliant people in our field, especially in the iSchool, and you'll learn so much from them even after the end of your course,” he says. He also advises current students to get involved in their local professional associations. “Don't be intimidated or feel that you don't have anything to offer; your perspective and energy will only benefit the field and help you make connections,” Travis says. Regarding important skills and qualities for information professionals today, Travis thinks it is important to be flexible, especially when you are first starting out. “Being willing to try something new is also a great way to discover what aspects of librarianship you'd really like to focus on later in your career,” he says. He notes that another key part of library work is collaboration. “If new hires can show ways in which they've collaborated successfully, I think that really stands out in the interview process,” he says.

Current iSchool students can reach out to Travis with questions via email at tfeder@kent.edu.