Every year, the School of Information (iSchool) hosts the Celebration of Alumni and Student Success to recognize the accomplishments of library and information science students and graduates.

The iSchool awarded the following scholarships and awards Thursday, April 25 at their 2019 reception.

iSchool MLIS Alumna of the Year

For library and information science graduates who have made a significant contribution to the profession.

Megan Oakleaf is an Associate Professor in the iSchool at Syracuse University and her research interests include outcomes assessment, evidence-based decision making, information literacy instruction, information services, and digital librarianship. Previously, Megan served as Librarian for Instruction and Undergraduate Research at North Carolina State University where part of her work included training fellow reference librarians in instructional theory and methods. Megan earned her MLS from Kent State University in August 2000. Prior to a career in librarianship, she taught advanced composition in Ohio public secondary schools.

Master of Science Alumnus of the Year

For graduates who have made a significant contribution to the profession.

Ben White received his master's degree in information architecture and knowledge management from the Kent State iSchool in 2014. Currently he works in Enterprise Knowledge (EK) in Washington, D.C. His knowledge and skills combine what he learned from the iSchool, integrating KM, UXD and information technology to deliver comprehensive information management solutions with clients globally.

Friend of the Year

For graduates and others who have made a significant contribution to the School.

Richard Rubin received his MLIS from Kent State in 1976 and his Ph.D. from the University of Illinois in Urbana-Champaign in 1987. At KSU, he has served in many capacities: he has been a faculty member and Director of the School of Library and Information Science, Interim Dean of the College of Communication and Information (CCI), and Associate Provost for online learning. He retired from the University in 2013. He has served as member and Chair of the Committee of Accreditation of the American Library Association, and as a member of the Board of Trustees of the Ohio Library Council. In 2005, he was inducted into the Ohio Library Council Hall of Fame. He is currently on the Board of Trustees of the Cuyahoga Falls Library. Dr. Rubin has written and spoken on a variety of subjects locally and nationally. He is also the author of the book, Foundations of Library and Information Science.

For library and information science graduates who contributed the most to the school as a student, while maintaining a good grade point average.

With a bachelor’s degree in international studies from Butler University and master’s degrees from Indiana University and Kent State University, Everstijn is currently a doctoral student in the College of Communication and Information. As a founding member of the iSchool’s Graduate Student Advisory Council, she continues to serve as a doctoral student representative. In January 2019, Everstijn presented a paper at the 1st Lisbon Winter School for the Study of Communication conference, and she just returned from presenting a paper at MuseWeb19 in Boston. Everstijn hopes to obtain an academic position and continue researching human information behavior and political communication.

For library and information science graduates who have exhibited creativity, leadership and dedication to the K-12 audience.

Kristin Jónsson became a reader on the laps of her mother and grandmothers. She went on to study Spanish and elementary education and worked as a bilingual teacher in Southern California. At Kent State, she took an active interest in her classes, joined OELMA and Future Ready Librarians and presented at the Virginia Hamilton and OELMA conferences. Currently she is an alternative instructor in the media center for Gahanna Jefferson Public Schools.

For library and information science graduates who have exhibited creativity, leadership and dedication to the K-12 audience.

Angie Jameson is in her second year of serving as Library Media Specialist at Chagrin Falls Exempted Village Schools. She graduated from Kent State with an MLIS with a concentration in school library media in December 2017. As the Library Media Specialist, she pairs up with a team of teen readers to write book reviews for Voice of Youth Advocates. She also enjoys teaching research across the curriculum and collaborating with teachers to help them build the confidence to incorporate research and technology into their everyday curriculum.

For library and information science graduates who, as students, demonstrated outstanding scholarship and an interest in the area of library preservation.

Courtney Dalessandro received an MLIS from the University of Pittsburgh in 2009 and completed a Certificate of Advanced Study at Kent State University in 2018. Currently, she is the Interlibrary Loan Specialist at Hosting Solutions and Library Consulting (HSLC) where she provides support, documentation, and training for the statewide catalog and interlibrary loan services.

For library and information science graduates who, as students, demonstrated creativity, leadership, and dedication to children's librarianship through outstanding academic achievement.

A native of Athens County, Ohio, Luke Bentley earned his bachelor’s degrees in history and education from Ohio University before entering the library field as a youth services librarian for the Athens County Public Libraries. In 2018, he earned his MLIS from KSU and took the position of Youth Services Manager for the Chillicothe and Ross County Public Library. In February of 2019, Luke accepted the Assistant Director position for the Guernsey County District Public Library, where he currently works in Cambridge. He also serves on the OLC Professional Development Committee.

For academic excellence and promise for leadership in the field of information architecture and knowledge management.

For the past 15 years, Alice Sue Claeys has worked at UCB and served as the Knowledge Management Lead for the Seizure Freedom Mission there for the past three years. During this time, she pursued a master’s degree in knowledge management and an MLIS at Kent State University. Alice Sue also holds a graduate degree in international business and a master’s in professional accounting, has earned her CPA, CIA and CMA certifications and had an early career as a professional figure skater.

In addition to attending school part-time, Aaryn Bierly also works full-time as a youth services associate at a public library. She is married with a 9-month-old son, and her favorite part of her job is storytime. The books that she reads there provide a steady stream of new books she shares with her baby. The JW Coffman and Priscilla L. Drach's Children's Librarianship Scholarship recognizes her creativity, leadership and dedication to children's librarianship.

Studying both library science and health informatics, Jessica Callaway is currently the reference assistant for Dekalb Medical Center's health science library as well as one of three Education Analysts at Gwinnett Medical Center. Her academic focus lies in health literacy and advocacy. She hopes to work to increase the national health literacy rate and, in doing so, the quality of life for patients. The Rose Vormelker Scholarship recognizes her promise in the field of special librarianship.

Gwendolyn Govia was born and raised in Pomona, a rural township in southern New Jersey. Her grandfather moved to New Jersey in the 1940s hoping to own land, an impossibility for him, sharecropping in Georgia, and later a state college was built nearby. At this college, Gwendolyn discovered her love of literature and felt a deep tie to her college library. Her MLIS from Kent State allows her to share her education and love of knowledge with the community and is an affirmation of the dream of a better life begun with her grandfather. The Alumni & Friends Council Minority Scholarship recognizes her capacity to achieve academic and professional goals and potential for leadership.

Originally from Armenia, Ruzanna Karapetyan received her undergraduate degree in linguistics and psychology where she worked as a translator and interpreter. After moving to the US in 2005, she held several administrative/ clerical positions while always planning to continue her education. Ruzanna applied and got accepted to MLIS program at Kent State University and will graduate in 2019. She looks forward to starting her career as a librarian. The Geauga West Friends of Library Scholarship recognizes residents of Geauga county who are pursuing their MLIS.

An MLIS/MEd degree candidate at the iSchool slated to graduate in May 2019, Jacqueline Kuciubuk is currently the KSU ALA Student Chapter’s President and an intern for the ALA Committee on Literacy. While pursuing her degrees, Jacqueline was a founding member of the Graduate Student Advisory Council (GSAC) at the iSchool. Her research interests revolve around the intersection of children’s librarianship, diversity, education and literacy. The H. W. Wilson Scholarship Fund Award recognizes her academic performance and other accomplishments.

The Music Library Assistant in the Jones Music Library at Baldwin Wallace University, Lanson Wells holds both a master of music and bachelor of music degrees. As part of Kent State's iSchool, Lanson is pursuing both the MLIS and the certificate in online and blended teaching program. He has performed as a viola and violin player in professional orchestras in Ohio, North Carolina, Indiana and Virginia and has previously worked as an orchestral librarian. The Petta and Ron Khouw Scholarship recognizes his interest in reference librarianship or academic reference services.

For almost four years, Monica Wilson has worked at the Noble Neighborhood Branch of the Heights Libraries. She enjoys being a part of several community partnerships, including the middle school. In her role at the library, Monica serves all ages and has a regular storytime, but her focus is on teens and tweens. She sees it as vital to provide them with a safe and welcoming space and offer programming for both fun and growth. The James E. Cook Scholarship in Young Adult Librarianship recognizes her specialization in teen librarianship as well as her strong interest in young adult literature.

Amanda Winkle's first and current employer is the Public Library of Cincinnati and Hamilton County. Starting as a volunteer, Amanda was encouraged by the librarians in the system to rise in the profession and their passion for libraries inspired her to apply to Kent State University's iSchool. Working full time, she is able to obtain her MLIS entirely online and she loves to help patrons navigate the sea of knowledge. Amanda's ultimate goal is to become an academic librarian and the Marian Porter Huffman Scholarship recognizes her potential for future scholarly research and publication. 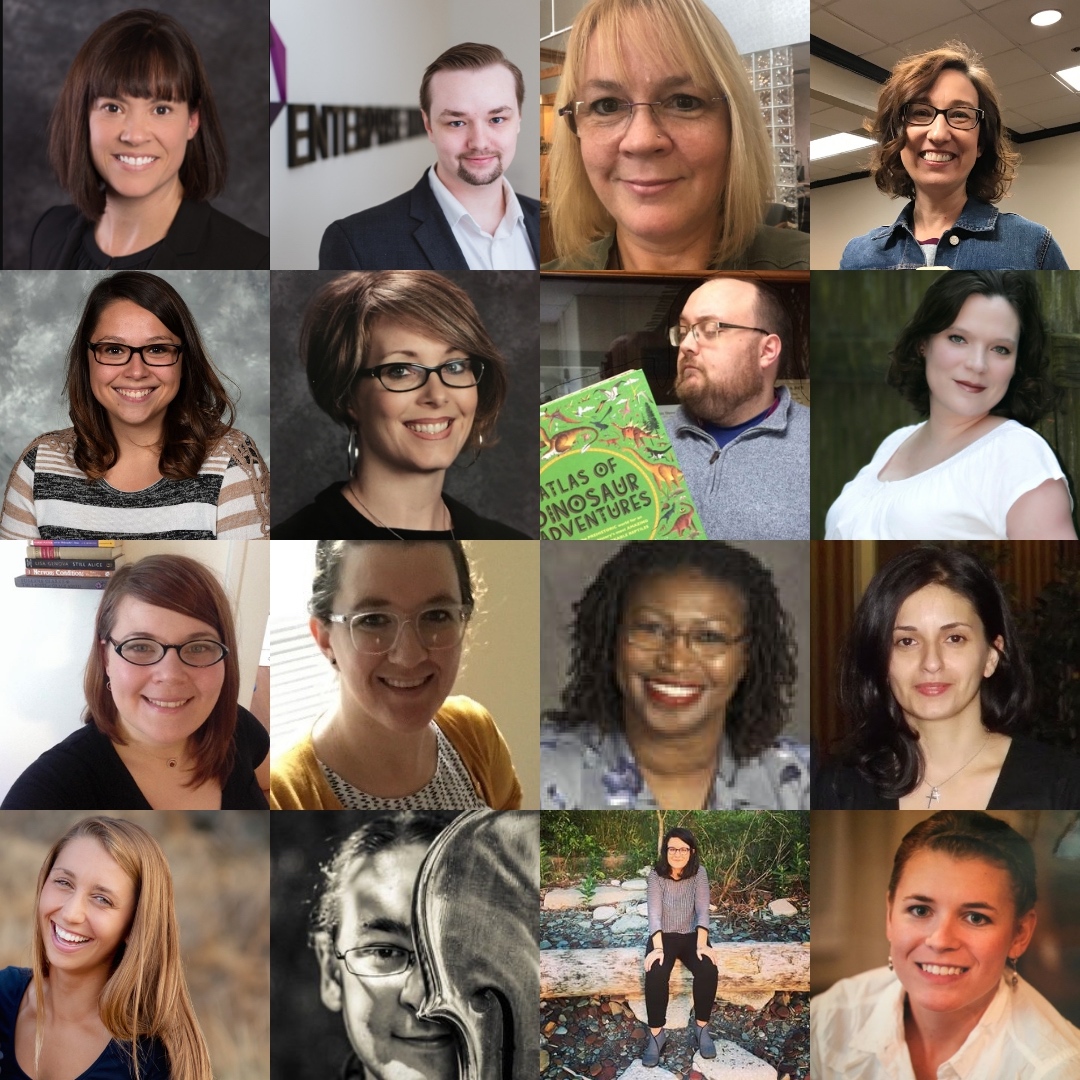