Across the state of Ohio, there are thousands of outdoor sculptures, but previously there had been no organized way of finding them or searching for them. Either you learned about a sculpture when you were in the area, someone else mentioned one to you or you read about it in a guide.

The Ohio Outdoor Sculpture (OOS) project seeks to change that.

Begun in the 1990s as part of a federally funded Heritage Preservation Program, OOS is maintained by The Sculpture Center, a Cleveland based nonprofit arts organization. With support from the Ohio Arts Council and The George Fund Foundation, OOS began in 2012 to use crowdsourcing as a way of expanding their database. Currently, Ohio is the only state in the nation that has collected this material and made it publicly available online. The OOS are aided in this work by The Sculpture Center board member and Head of Special Collections at Cleveland State University, Bill Barrow, a Kent State graduate from the M.L.S. program in 1998 and 2016's Alumnus of the Year for the iSchool.

With the help of students and faculty from the Kent State School of Information, the inventory of these sculptures is growing. Five library and information science graduate students, Zach Baker, Megan Calhoun, Aaron Moore, Aubrey Obrien and Sara Ross, have traveled across the state documenting the sculpture during spring of 2021. And some will be starting this journey this summer as well as next year, including documenting works in the northwest and southwest corners of the state. 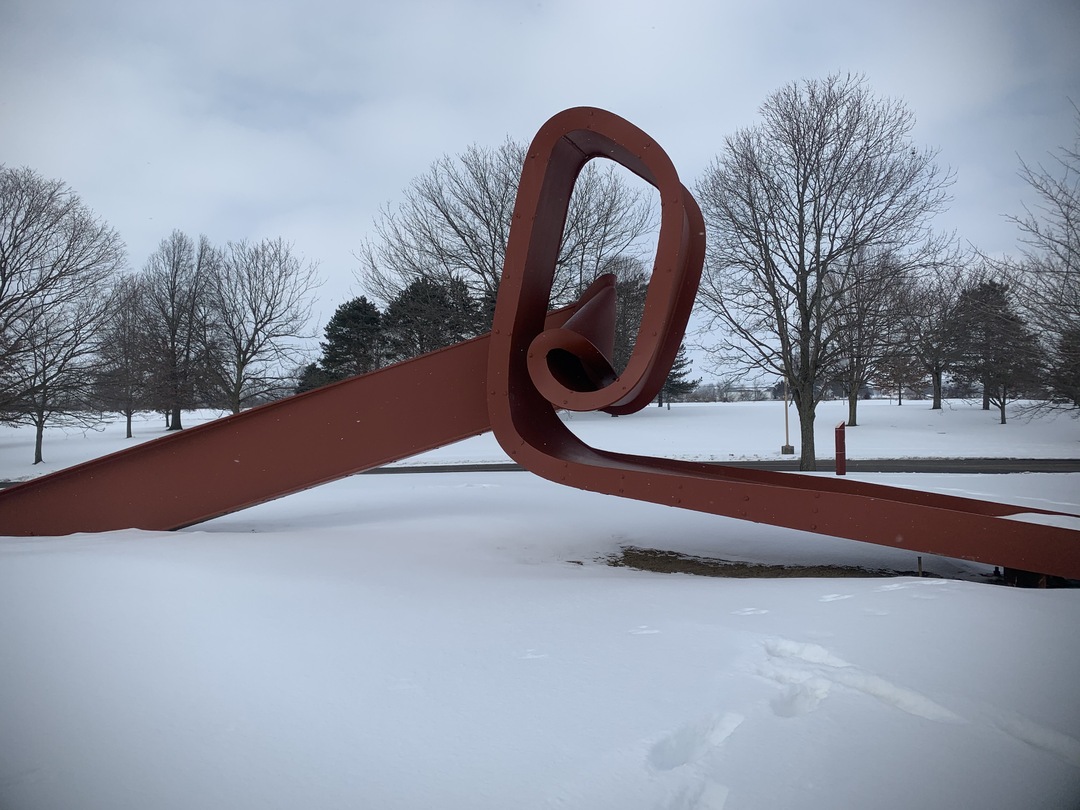 As Megan Calhoun explained recently in an interview, she begins by searching the internet for leads on sculptures in her territory of Marion, Delaware, Morrow, Hardin, Logan and Union counties. Next begins the reaching out phase, where she calls local historical societies, libraries and colleges to get more information. Do they know any background on the sculpture? Is it still standing? Can they confirm the location? At that point, Calhoun is ready to make the trip to the sculpture's location, photograph it, and collect other information before loading everything into the Ohio Outdoor Sculpture database.

And sometimes a trip to document five sculptures turns up five more that weren't on the agenda.

Zach Baker's territory takes him through the East/Central Ohio region of Ohio, including Coshocton, Guernsey, Holmes, Knox, Muskingum and Tuscarawas counties. In an interview with the Coshocton Tribune, Baker pointed out that it's not the cities where these hidden treasures are necessarily located. “A lot of the more rural counties aren’t quite represented in the database, because it works off of outside help from people and a lot of that outside help is stationed in the big cities.” Like Calhoun, his process involves internet research as well as calling up local libraries, parks, county engineers and known sculptors. 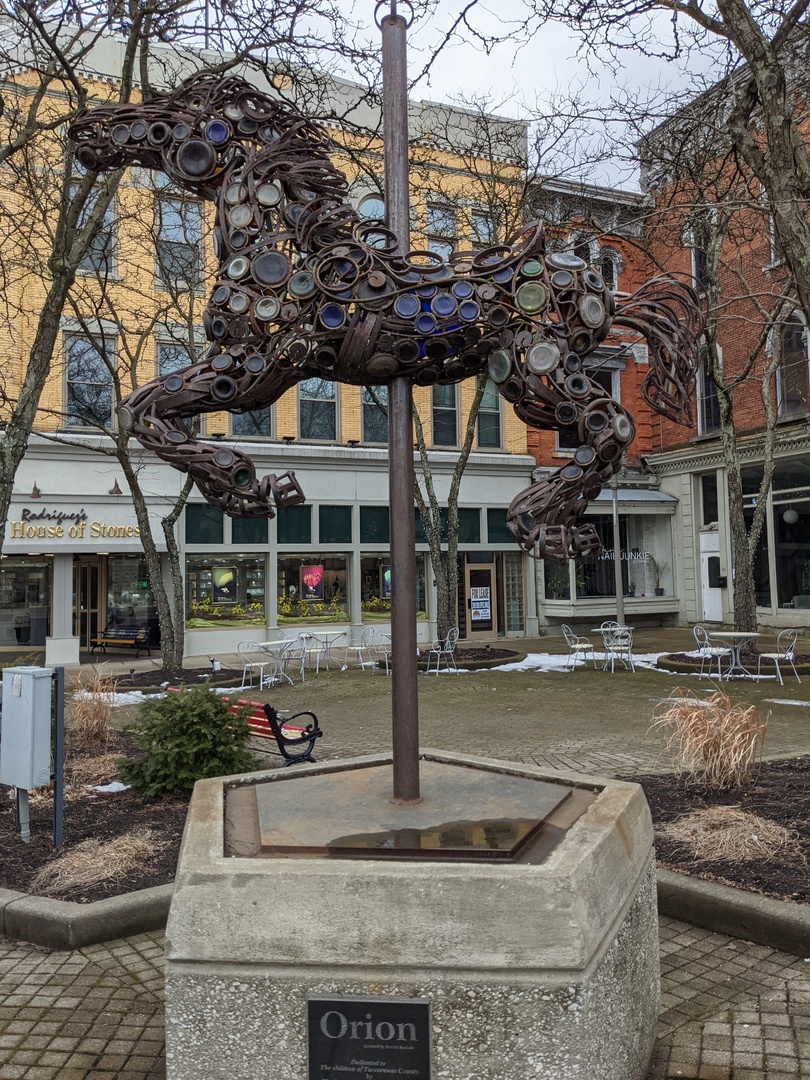 Aaron Moore's territory also finds him in East/Central Ohio, in Region 2, consisting of Carroll, Columbiana, Harrison, Jefferson and Stark counties. As of this writing, Moore has logged over 25 sculptures including abstract contemporary pieces and those with an historical backstory. He too chases down leads before making the trip to the location for documenting the sculpture. While Spring 2021 was Moore's final semester toward his graduate degree, he has continued in his internship position through the summer, along with new interns Arpi Anderson and Kathy Berry.

What does not count toward the OOS database? Most grave markers or headstones are excluded, save for ones that include unique sculptural works such as the Weeping Angel of State Street Cemetery in Athens, Ohio. Other exclusions include mass produced items, large architectural structures such as bridges as well as minor architectural ornaments like coats of arms carved into buildings and keystones and minor commemorative works such as plaques and historical markers. 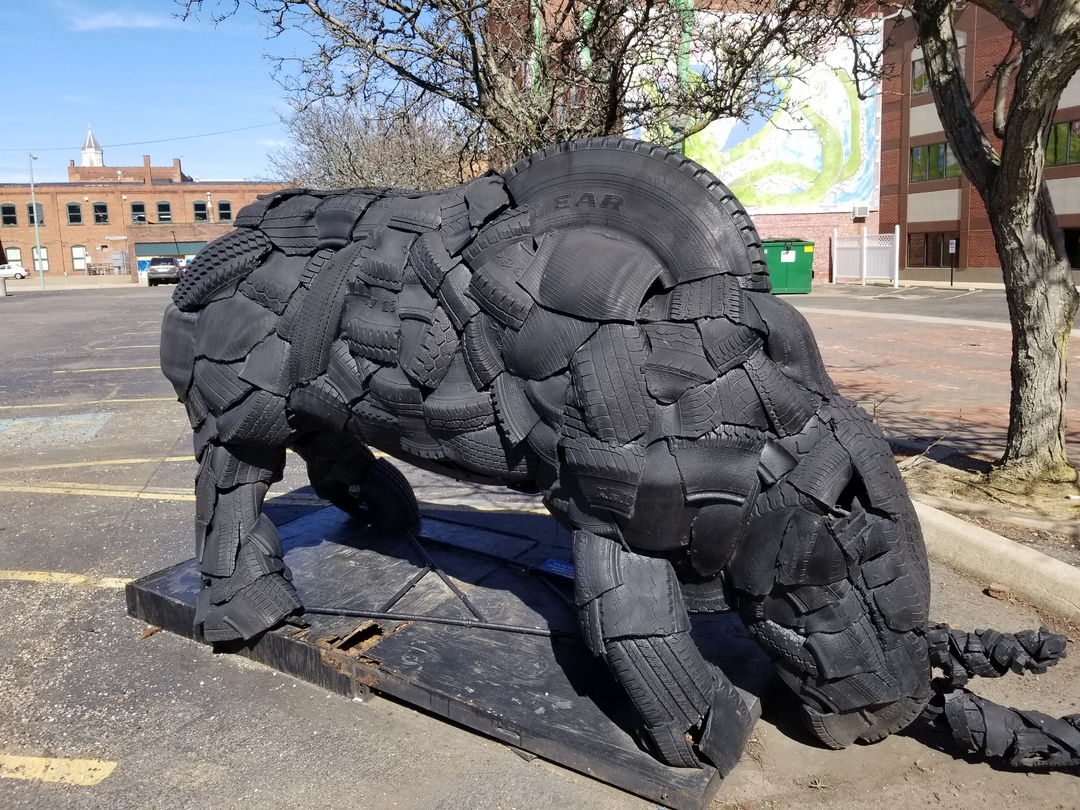 As the database continues to grow, so does public awareness about it. Graduate students have been featured in local newspapers, such as The Weirton Daily Times, the Mount Vernon News, the Marion Star and on Applause, a PBS television program running on the Cleveland station, WVIZ. The students are hopeful that the more Ohioans hear of this, the more will pitch in and contribute sculptures in their own neighborhoods. 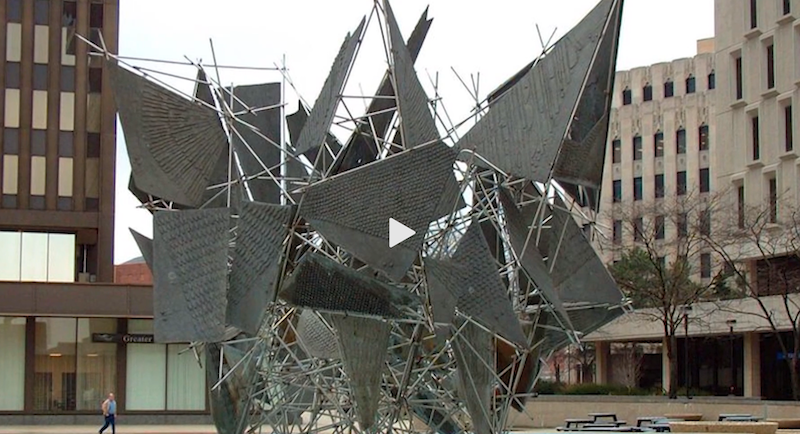 If you would like to submit local public sculpture to the database or update an existing entry, you can email the Ohio Outdoor Sculpture project at: oos@sculpturecenter.org.

Photos courtesy of the Ohio Outdoor Sculpture project and the students referenced in the article.