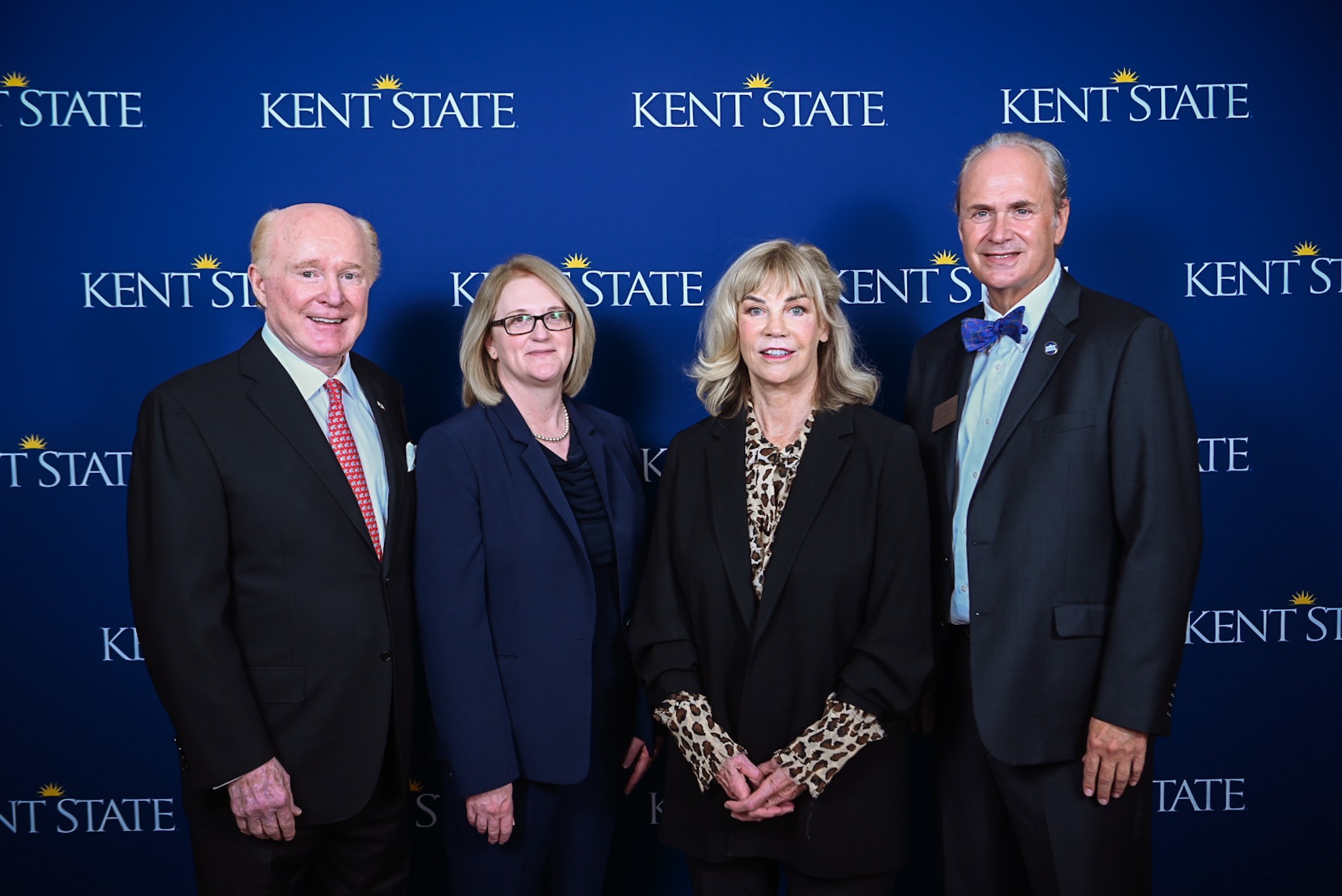 The largest single gift in Kent State University history, by Ambassador Edward F. Crawford, will complete the capital campaign to enable the construction of a new College of Business Administration building on the university’s Kent Campus. The Kent State Board of Trustees approved the construction of a new, state-of-the-art building on behalf of the college in a special meeting held Friday, Oct. 22. 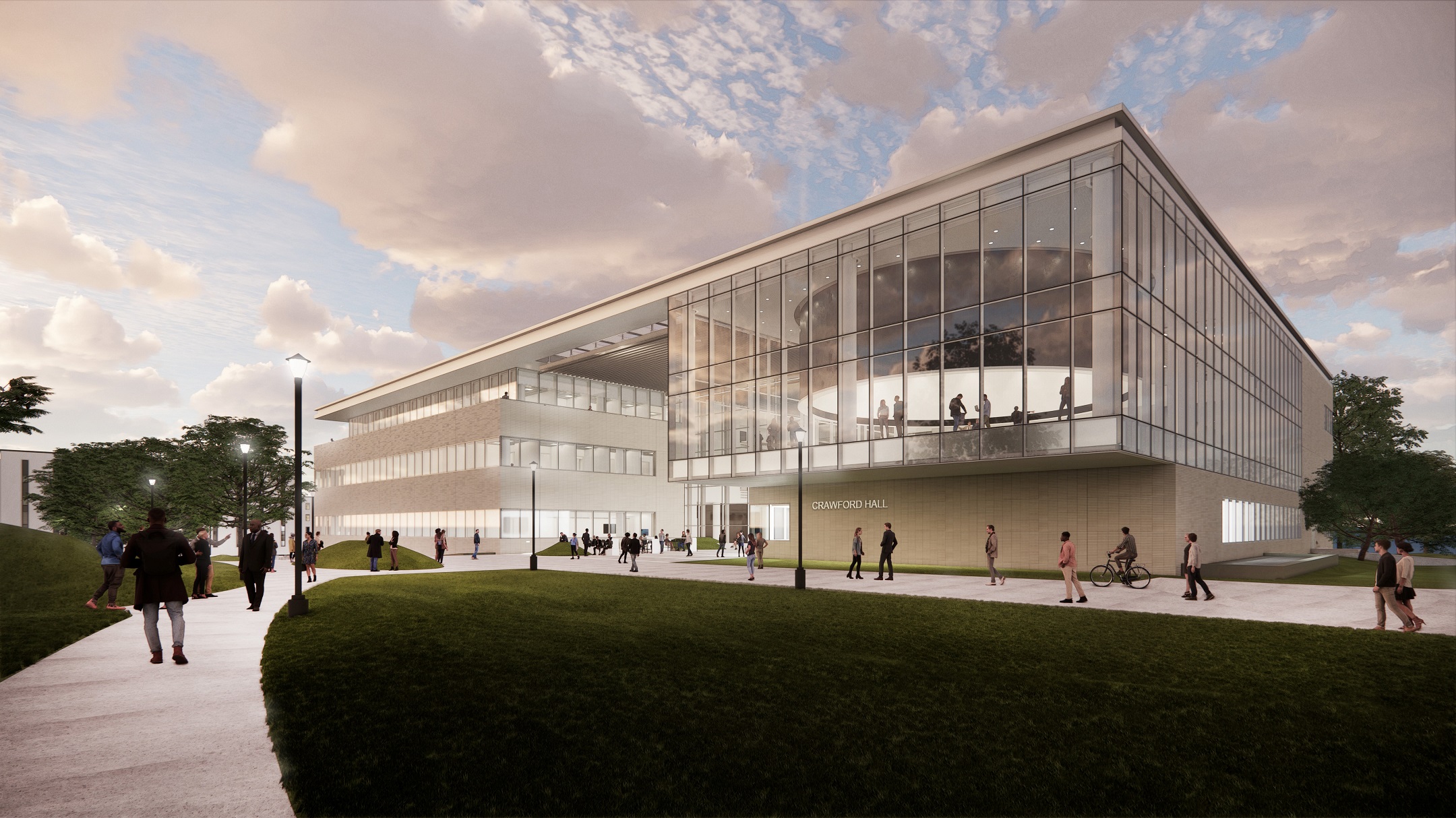 “Ambassador Crawford has spent his life as a successful entrepreneur and business owner, growing his company from the ground up,” said Kent State President Todd Diacon. “To have earned his confidence in our College of Business Administration, which will bear his name both for the college and on its new building, makes us very proud. Our students will not only be educated in an iconic facility, with a forward-thinking design, but they will also be able to look to him as a mentor for their own entrepreneurial and business endeavors. We are very thankful for his support.”

This transformative gift is the spark that enables the university to move forward with its Gateway to a Distinctive Kent State master plan. The master plan proposes the creation of a new signature gateway entrance to the Kent Campus that features Crawford Hall, the new home for the Ambassador Crawford College of Business and Entrepreneurship.

The new Crawford Hall will support innovative instruction, research and student support services for thousands of business majors, minors and others taking business courses across the Kent State system. The pandemic provided an opportunity to implement new instructional methods and technologies in higher education. Based on this new knowledge, the building design will include increased technology to support these modern instructional methods as well as flexible space for a variety of instructional layouts.

“Crawford Hall will be instrumental in how we prepare students for modern business careers,” said Deborah Spake, Ph.D., dean of the Ambassador Crawford College of Business and Entrepreneurship at Kent State. “This new building – which will be one of the largest buildings on any Kent State campus to house an academic program – and its enhanced technology will continue to bolster our reputation for both international business and entrepreneurship education. We anticipate a continued increase not only in domestic enrollment but also for international students seeking a top-tier education. With this gift and new building, the future is bright for the Ambassador Crawford College of Business and Entrepreneurship.”

The Ambassador Crawford College of Business and Entrepreneurship will be continuing the Ambassador’s ASPIRE Entrepreneurial Workshop Series, which he launched while posted in Ireland. As part of this program, Kent State will be taking entries for the first ASPIRE award to be presented in September 2022.

“The historic gift from Ambassador Crawford will serve the university and its future business students by preparing them to be successful in the workforce, which will help support and strengthen Ohio’s economy,” said Ohio Department of Higher Education Chancellor Randy Gardner. “This gift demonstrates an understanding of the value of higher education and appreciation for the quality instruction offered at Kent State University.”

Kent State’s Ambassador Crawford College of Business and Entrepreneurship has been educating students for 85 years and has grown to be the largest business school in Northeast Ohio. With more than 3,600 business students across the Kent State system, the college is the largest provider of entry-level business graduates in the region. These students represent 40 countries, demonstrating the college’s global footprint. Not only has the college grown, but its rankings are on the rise. In 2021, the college was ranked No. 25 by U.S. News & World Report for its Online MBA specialty concentration in Business Analytics and No. 26 by The Princeton Review for the Online MBA. The college is also recognized by U.S. News & World Report among the 2021 Best Undergraduate Business Programs in the nation. More information on the college is available at www.kent.edu/business.

The Crawford Hall building project is part of the university’s recently announced $350 million comprehensive campaign, Forever Brighter. The campaign is the largest in history for Kent State and features three main fundraising priorities: Prioritizing Student Success, Expanding University Initiatives and Building the Future. More information on the comprehensive campaign is available at www.kent.edu/foreverbrighter.

About Kent State University
Kent State University is the highest-ranked public university in northern Ohio on the Top Public Schools and Best National Universities lists by U.S. News & World Report. With eight campuses spanning Northeast Ohio, a College of Podiatric Medicine, a Twinsburg Academic Center and academic sites in major world cities, such as New York City, Geneva and Florence, Kent State is one of Ohio’s leading public universities and a major educational, economic and cultural resource far beyond the Northeast Ohio region it has served since 1910. Kent State is a national leader in award-winning student support services to graduate students. The student body comprises about 35,000 students, including 1,370 international students from nearly 100 countries, and the worldwide alumni family exceeds 262,000. The addition of new learning environments from the sciences to the arts and the development of exciting new academic programs characterize Kent State’s focus on transformational educational experiences. Kent State is one of 91 public doctoral universities with high research activity, as categorized by the Carnegie Classification of Institutions of Higher Education.

Rendering Caption:
The rendering shows the south facade of Crawford Hall, the new home for the Ambassador Crawford College of Business and Entrepreneurship at Kent State University. (Rendering courtesy of The Collaborative Inc. in partnership with Perkins + Will)