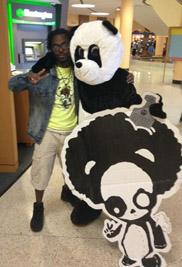 Afro Panda, which originated as a cartoon version of Chris Hicks, matured into a vision for the brothers. Chris started incorporating Afro Panda in his daily activities.

“My brother and I preform hip-hop music, and we gave a concert at the Kent Stage with ‘Afro-man,’ and so many people loved it,” says Chris. “A woman came up to me and said she loved the little man on stage. So, I couldn’t ignore it anymore, and we took it from an image and turned it into vision.”

The brothers’ goal is to turn Afro Panda into a cartoon show where he fights to eliminate stereotypes.

Chris and his brothers are ready to go public with their business plan and hope to raise enough money to pitch a cartoon show to major companies.

“It can stand for more than just a cartoon,” Chris says. “We hope that people latch on to the vision as well.”

It has been two years since the Hicks brother began the idea of Afro Panda, but it has only been one year since the team joined up with Blackstone LaunchPad. Blackstone LaunchPad is an innovative program that helps Kent State students, faculty, staff and alumni transform their business ideas into actual businesses.