Making the Most of Year One

Beverly Warren pledged to be a 24/7 president, and her schedule this first year in office has shown she’s as good as her word. Logging many miles on a Listening Tour across the country, meeting with campus and community leaders, reaching out to alumni and students, spearheading the development of a bold strategic plan—she’s been at the center of a whirlwind of activity, and we’ve got the photos to prove it. Here’s just a sample of the more than 10,000 shots our staff photographers have taken as they’ve hustled to keep up with her. They highlight her energy, warmth and unflagging spirit—all in the service of Kent State University. 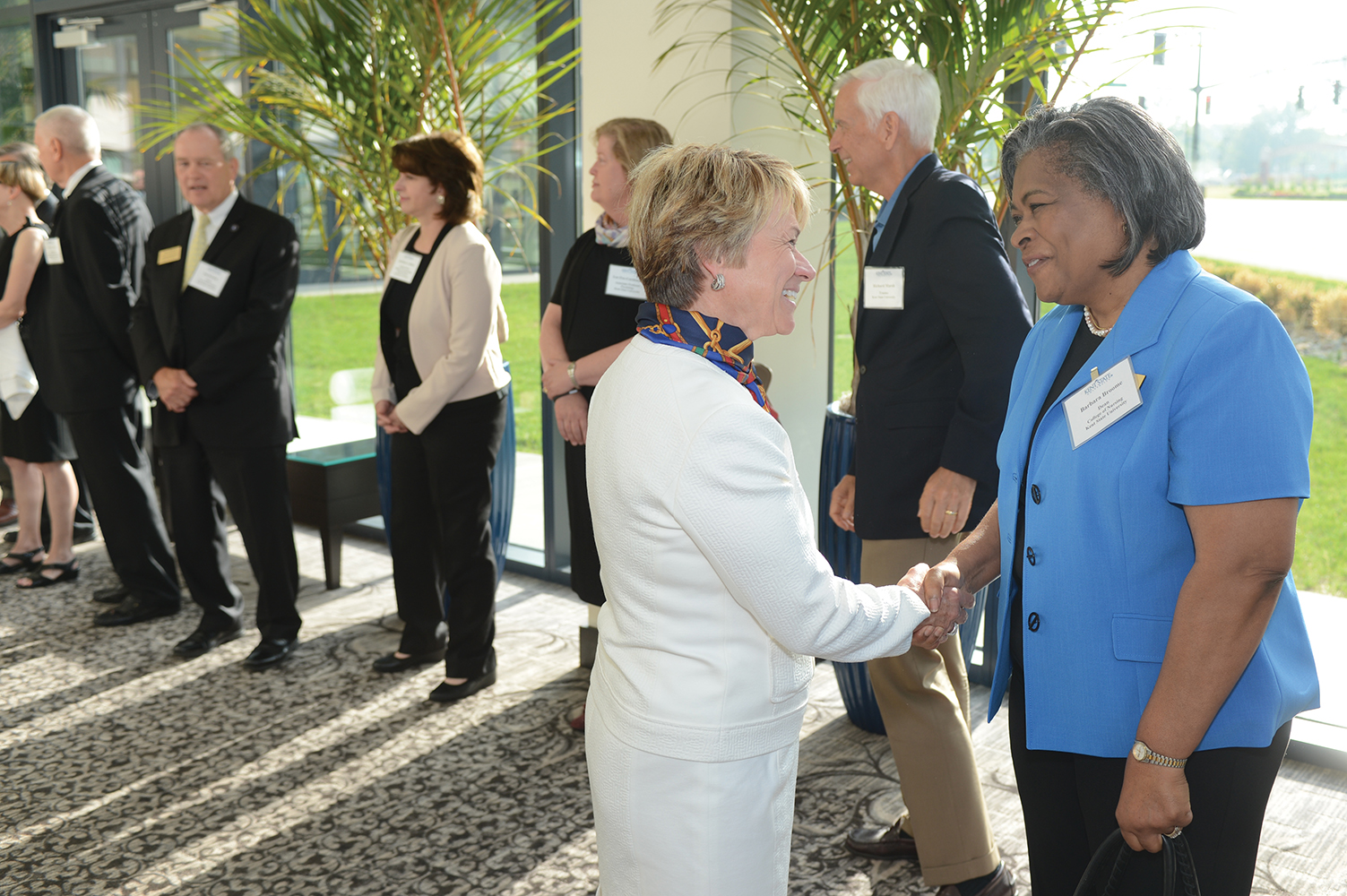 Tuesday, July 1, 2014, 12:30 p.m. Greeting Barbara Broome, dean of the College of Nursing, at a lunch with college and city leaders at the Kent State Hotel and Conference Center on her first day as president. 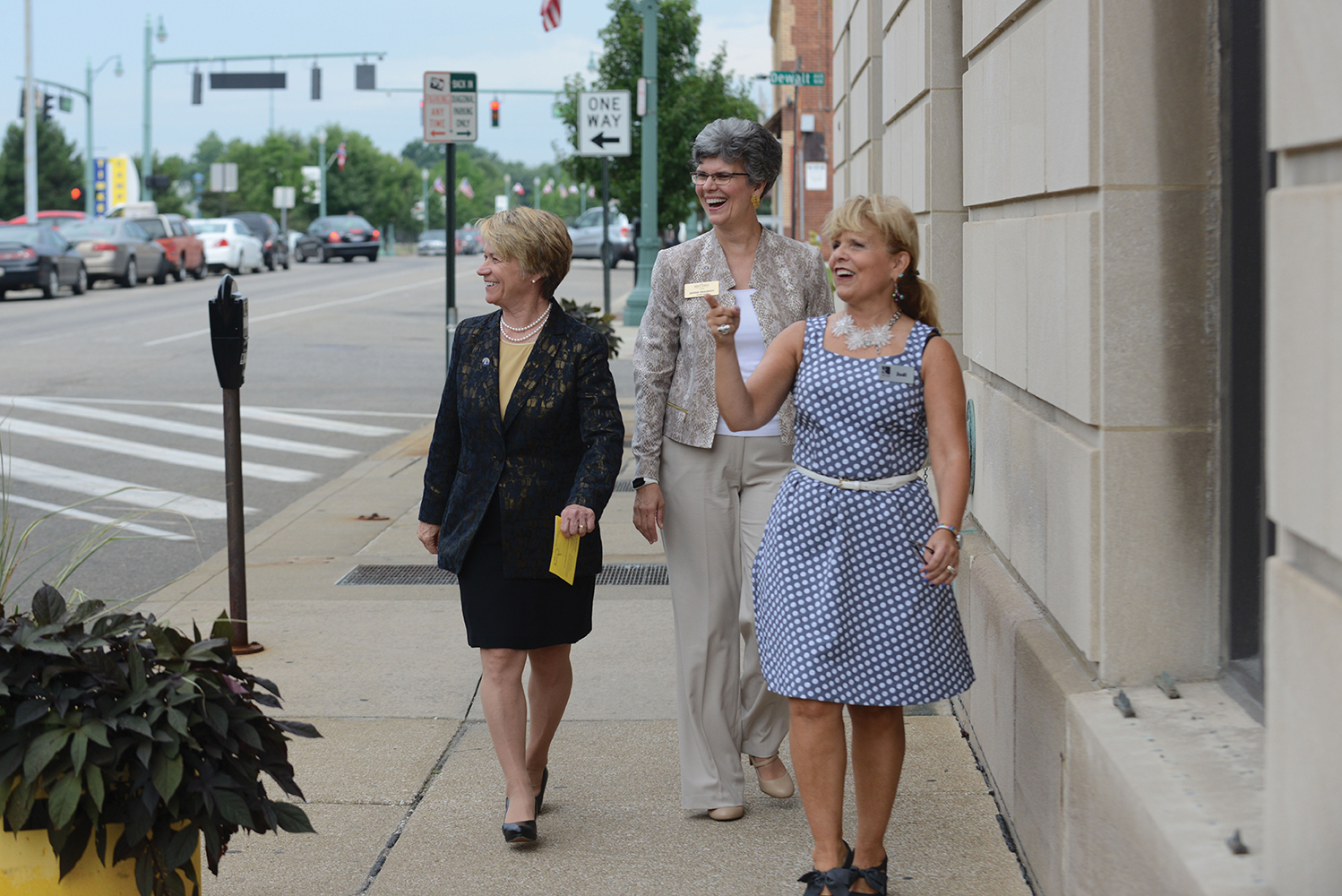 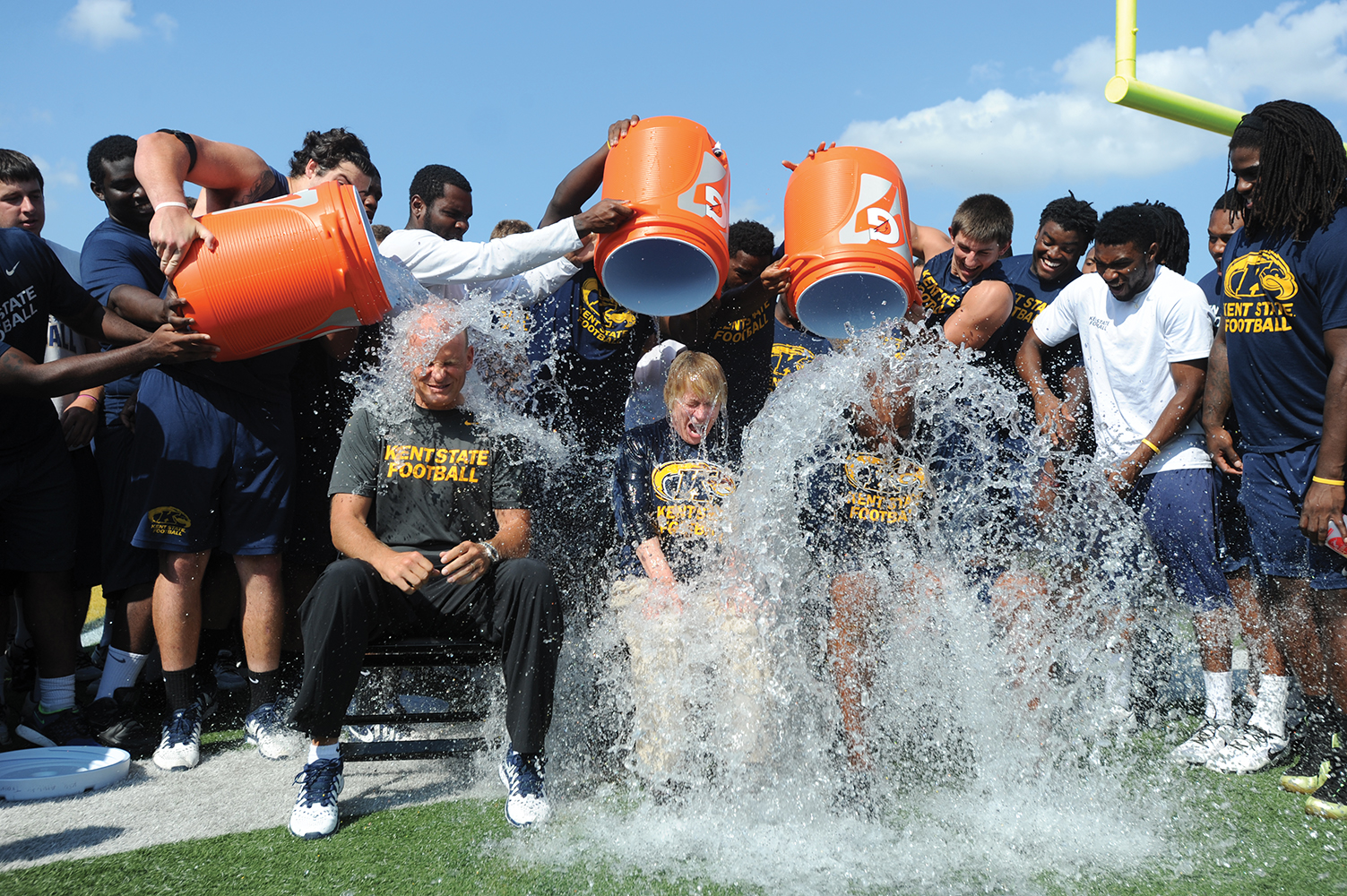 Tuesday, August 19, 2014, 4:25 p.m. Taking part in the national ALS Ice Bucket Challenge with Joel Nielsen, director of athletics, and Paul Haynes, head football coach, as members of the football team dump water on the trio’s heads. Warren accepted the challenge tweeted to her by Rebecca Windover, an assistant residence hall director whose father-in-law has been battling amyotrophic lateral sclerosis. 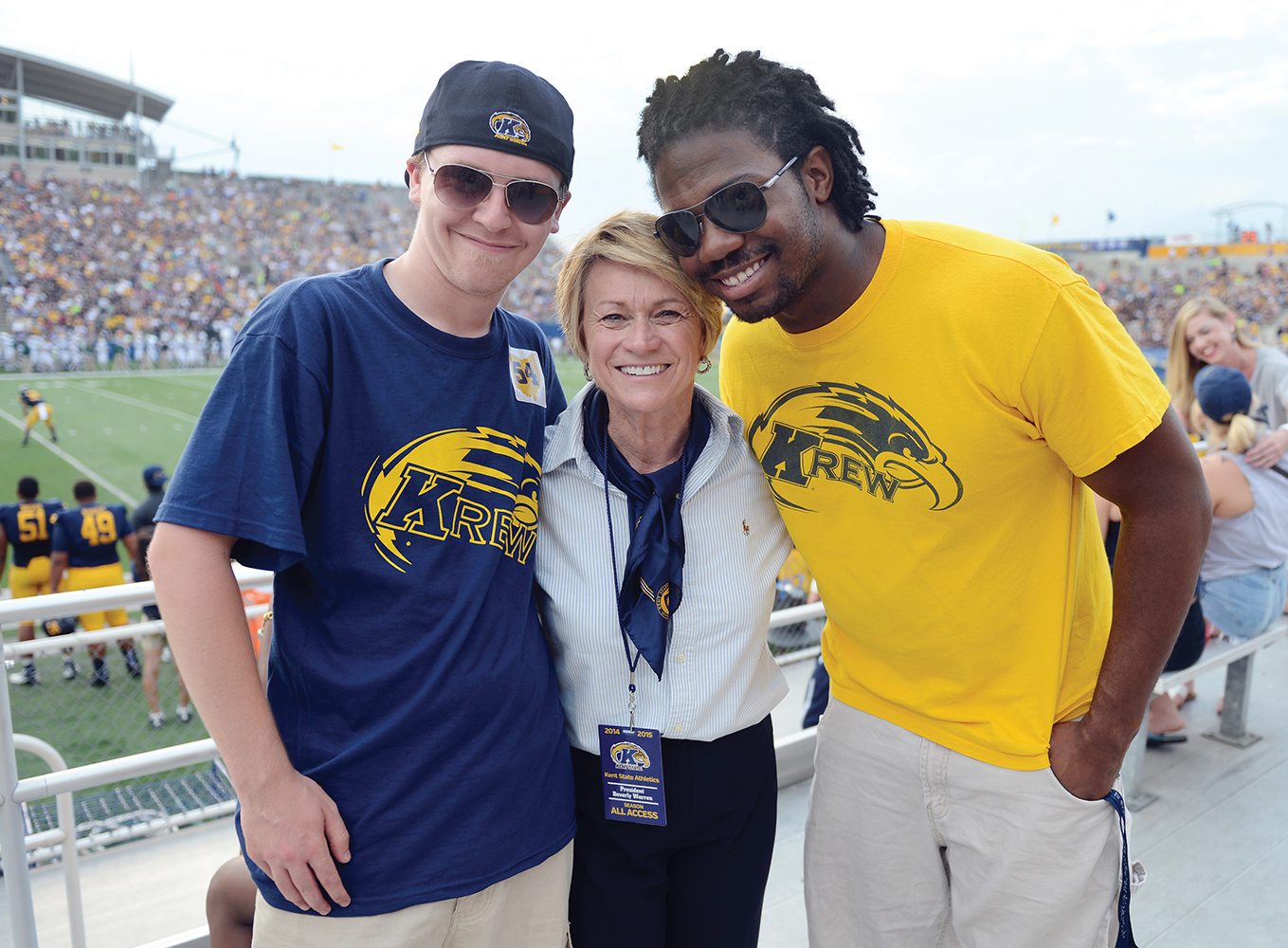 Saturday, August 30, 2014, 7 p.m. Joining students in the stands to cheer on the Flashes at their first home football game, playing against Ohio University. 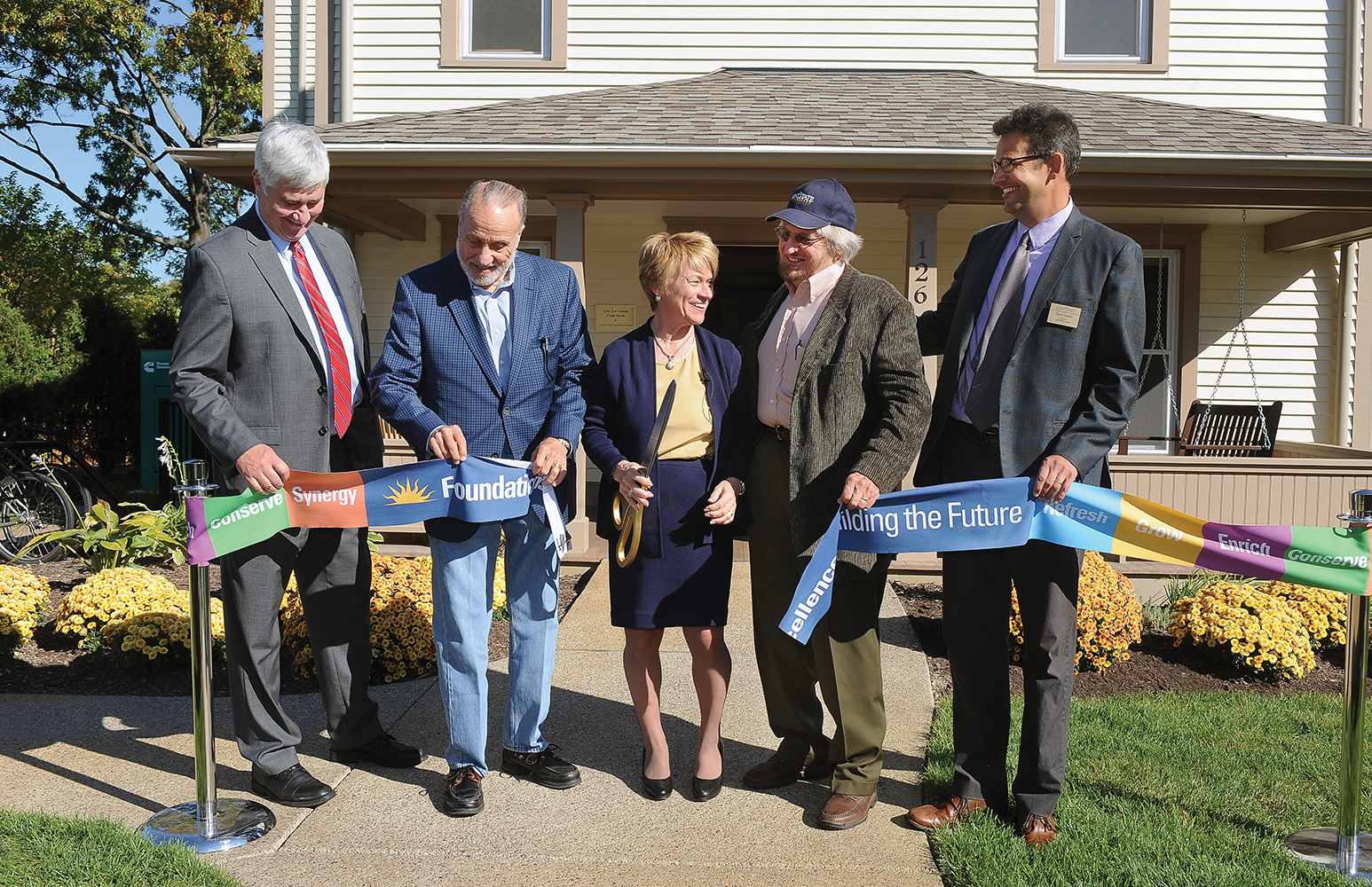 Friday, September 26, 2014, 10:25 a.m. Dedicating the May Prentice House and Poetry Park on the Lefton Esplanade, new home of the Wick Poetry Center. Joining President Warren are (from left) Jim Blank, interim dean, College of Arts and Sciences, Walter Wick and Robert Wick ‘57 (founding benefactors of the Wick Poetry Center), and David Hassler, director of the center. 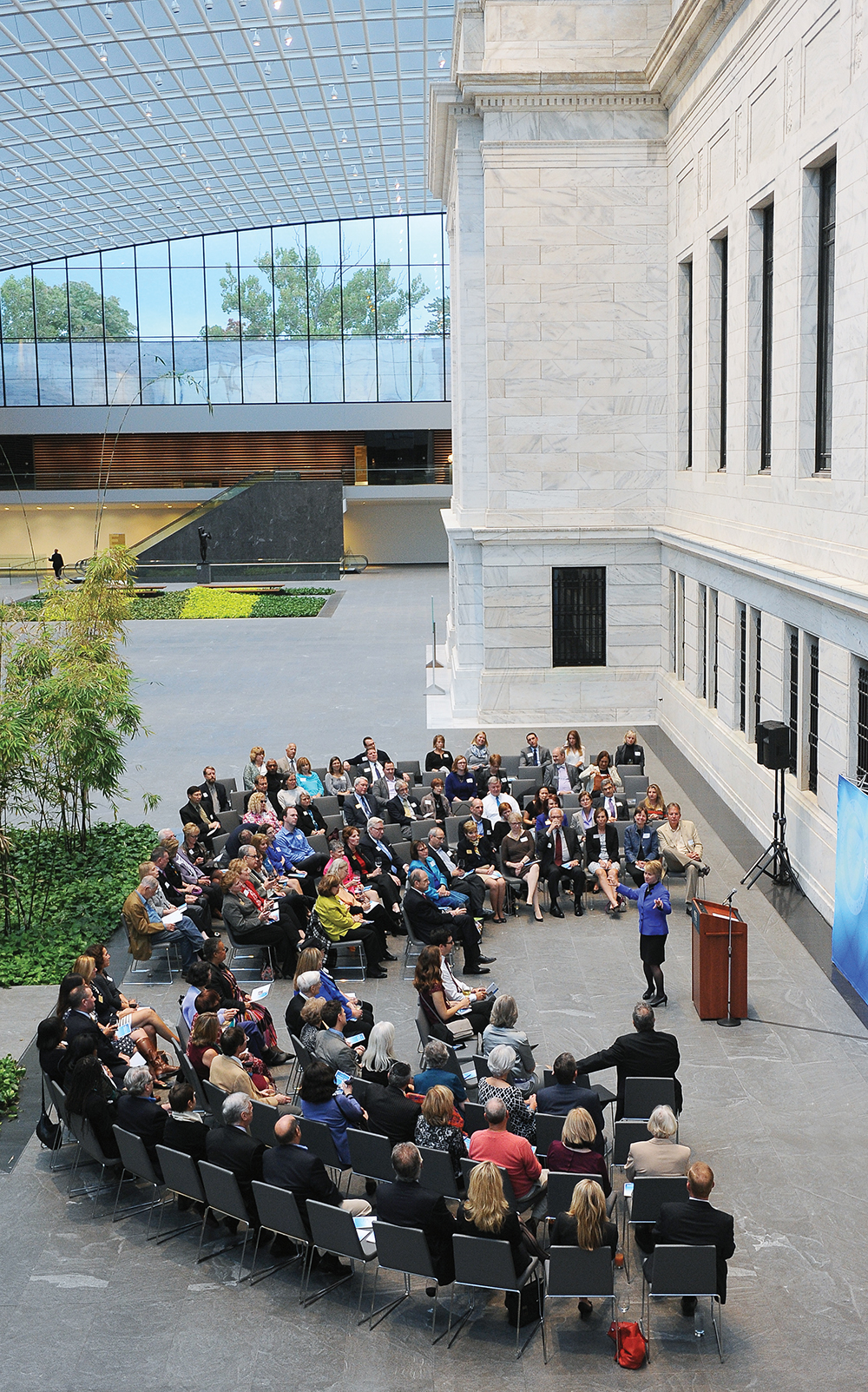 Tuesday, September 30, 2014, 6:05 p.m. Addressing an audience of alumni from the greater Cleveland area at the Cleveland Museum of Art’s Ames Family Atrium. President Warren made many stops on her Listening Tour, but the 39,000 sq. ft. atrium, designed by architect Rafael Viñoly as the centerpiece of the museum’s 2012 renovation and expansion, may have been the most breathtaking venue. 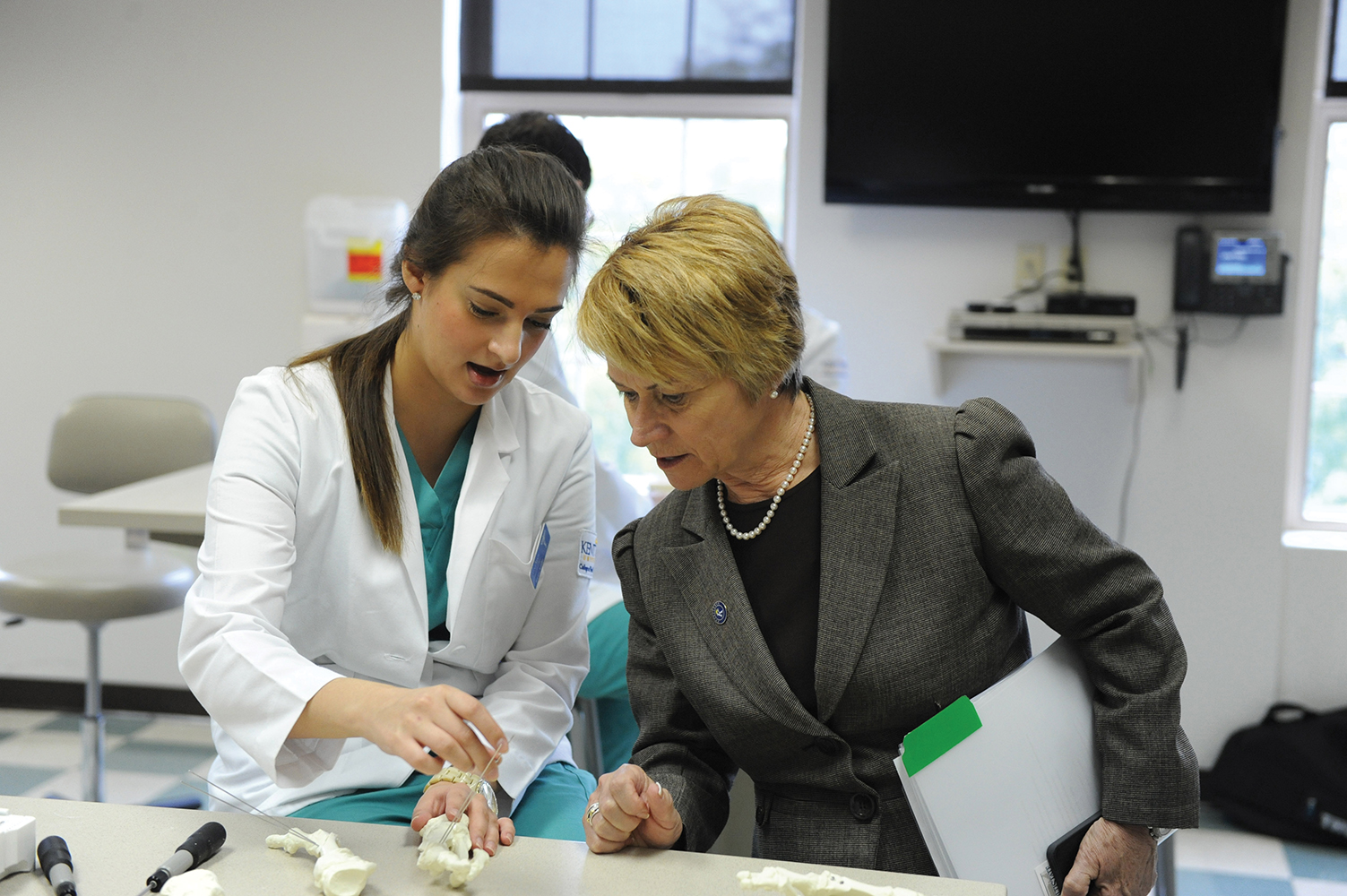 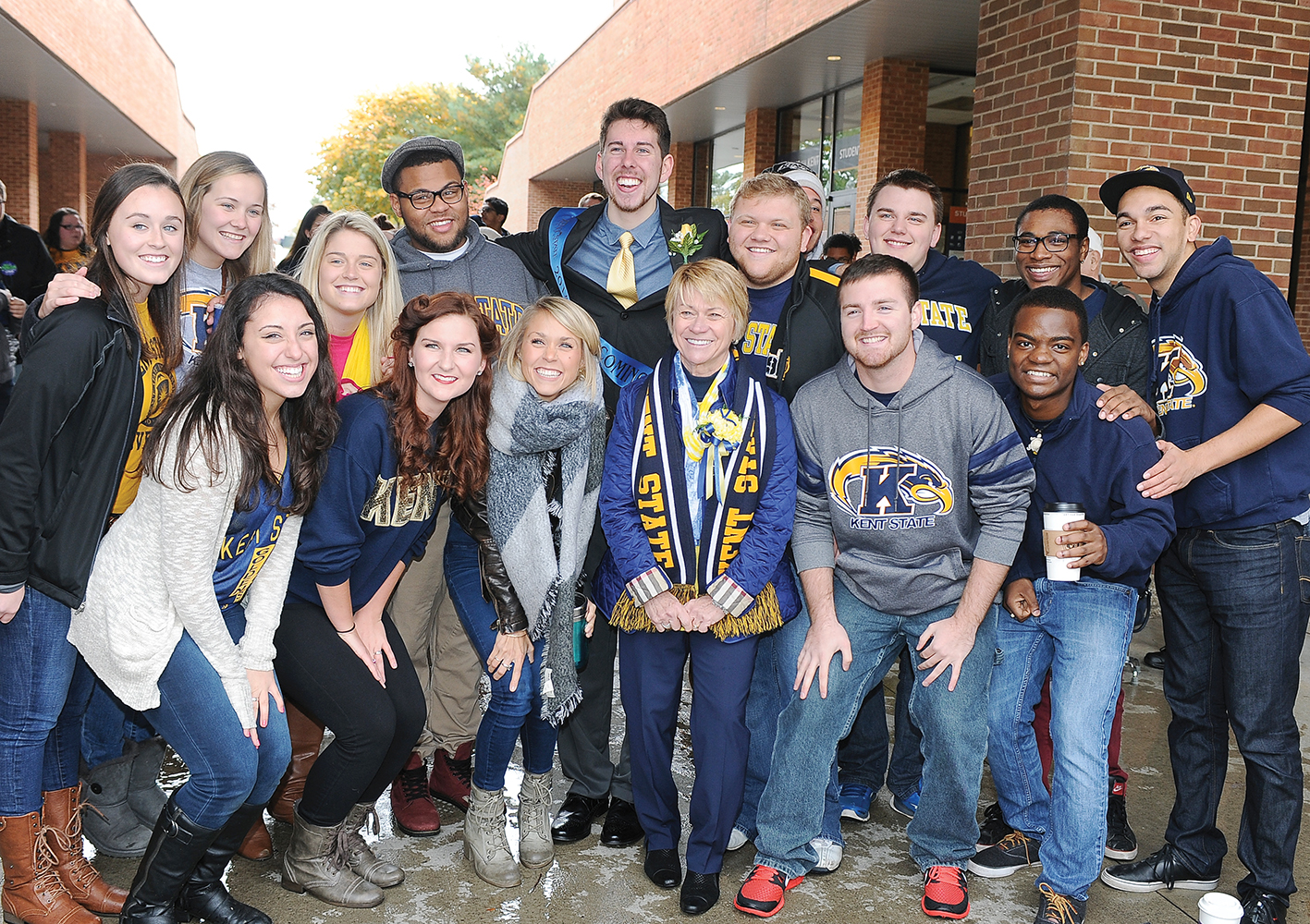 Saturday, October 18, 2014, 11:35 a.m. Gathering with a group near the student center just before the “Kiss on the K”—a Homecoming day event that invites Kent State couples to meet at the “K” on Risman Plaza and share a kiss when the library bells strike noon. 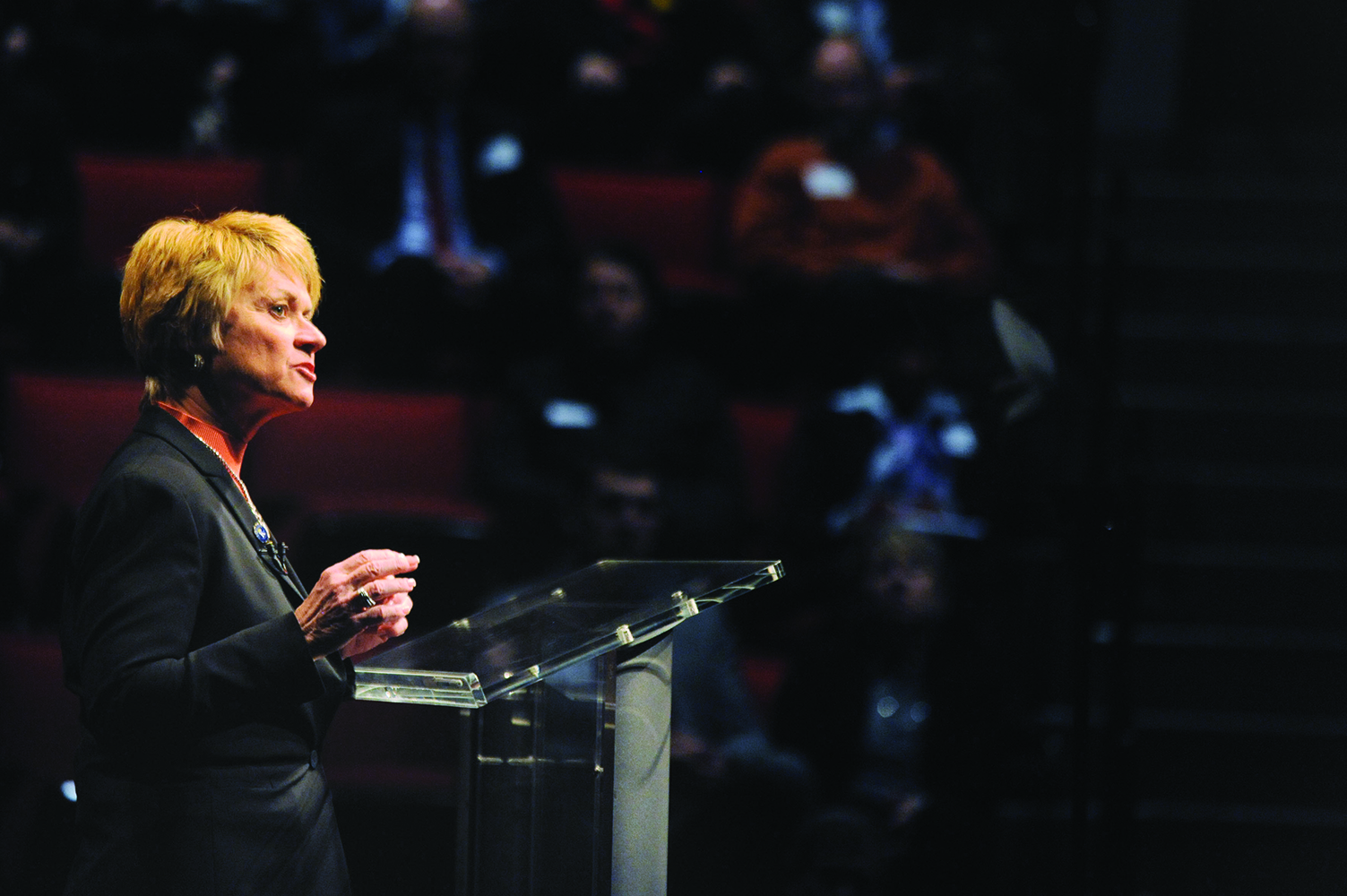 Tuesday, February 3, 2015, 4:23 p.m. Sharing what she learned about “the heart of Kent State” after hearing the thoughts, ideas, concerns and suggestions of more than 5,000 participants during more than 50 scheduled events in the Presidential Listening Tour. “Our first task will be formulating a shared vision for Kent State’s future,” said Warren in her report, which can be read here. 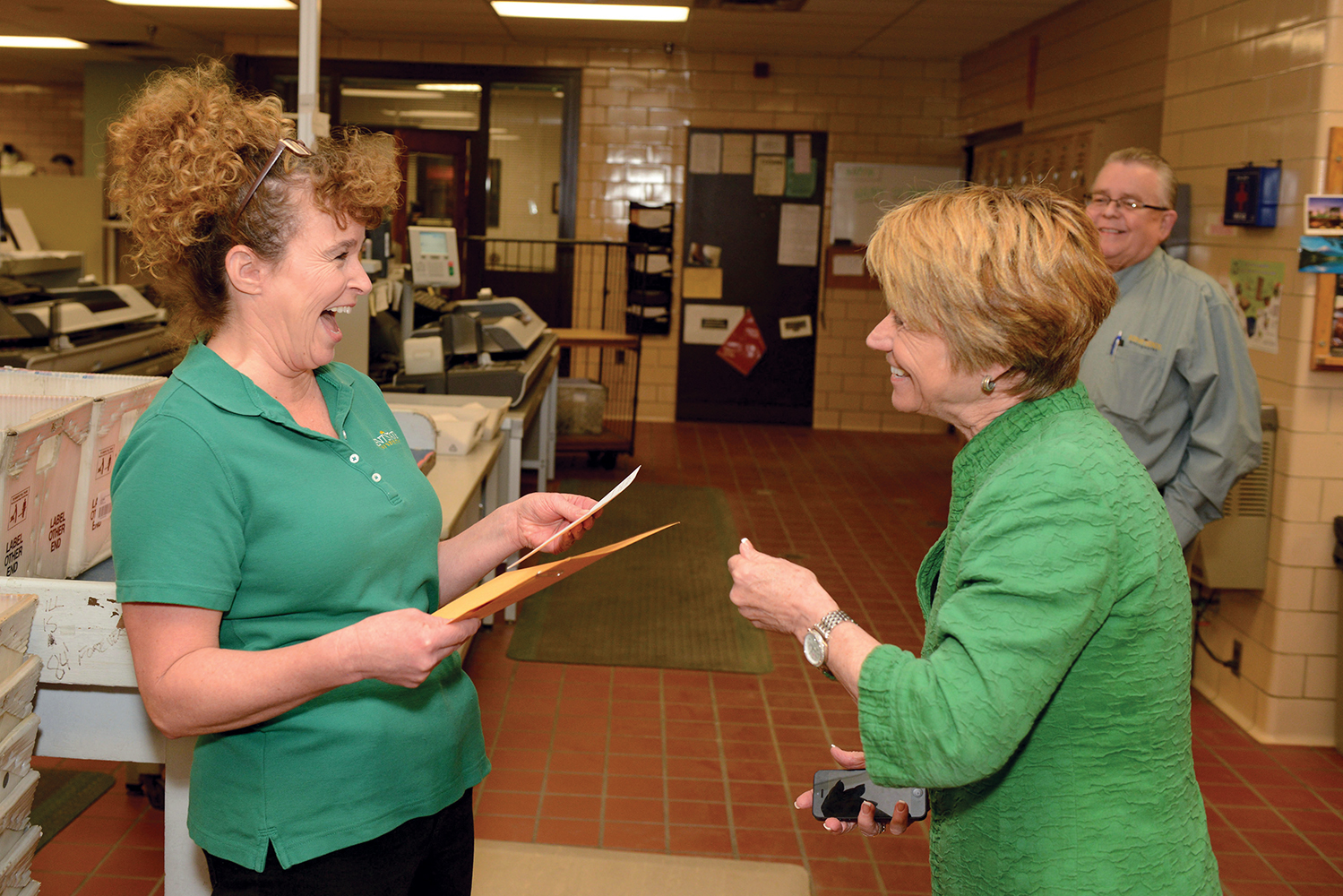 Monday, March 17, 2015, 9:01 a.m. Presenting a President’s Excellence Award to April Miller, a delivery worker at Mail Services. She was nominated for her operational efficiency and for being a role model and mentor to student workers who appreciate her work ethic, as well as her commitment to education as she completes a master’s degree. 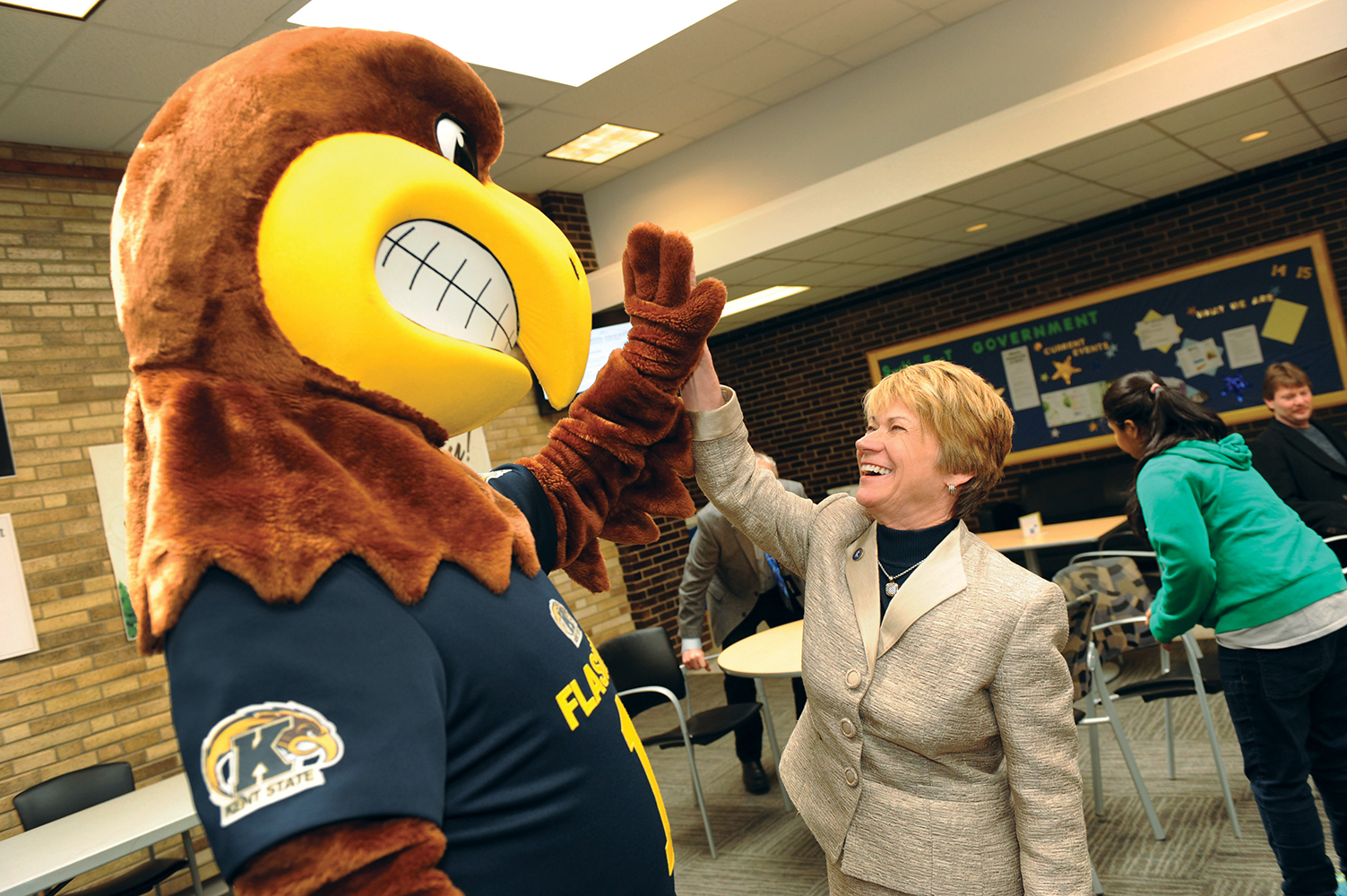 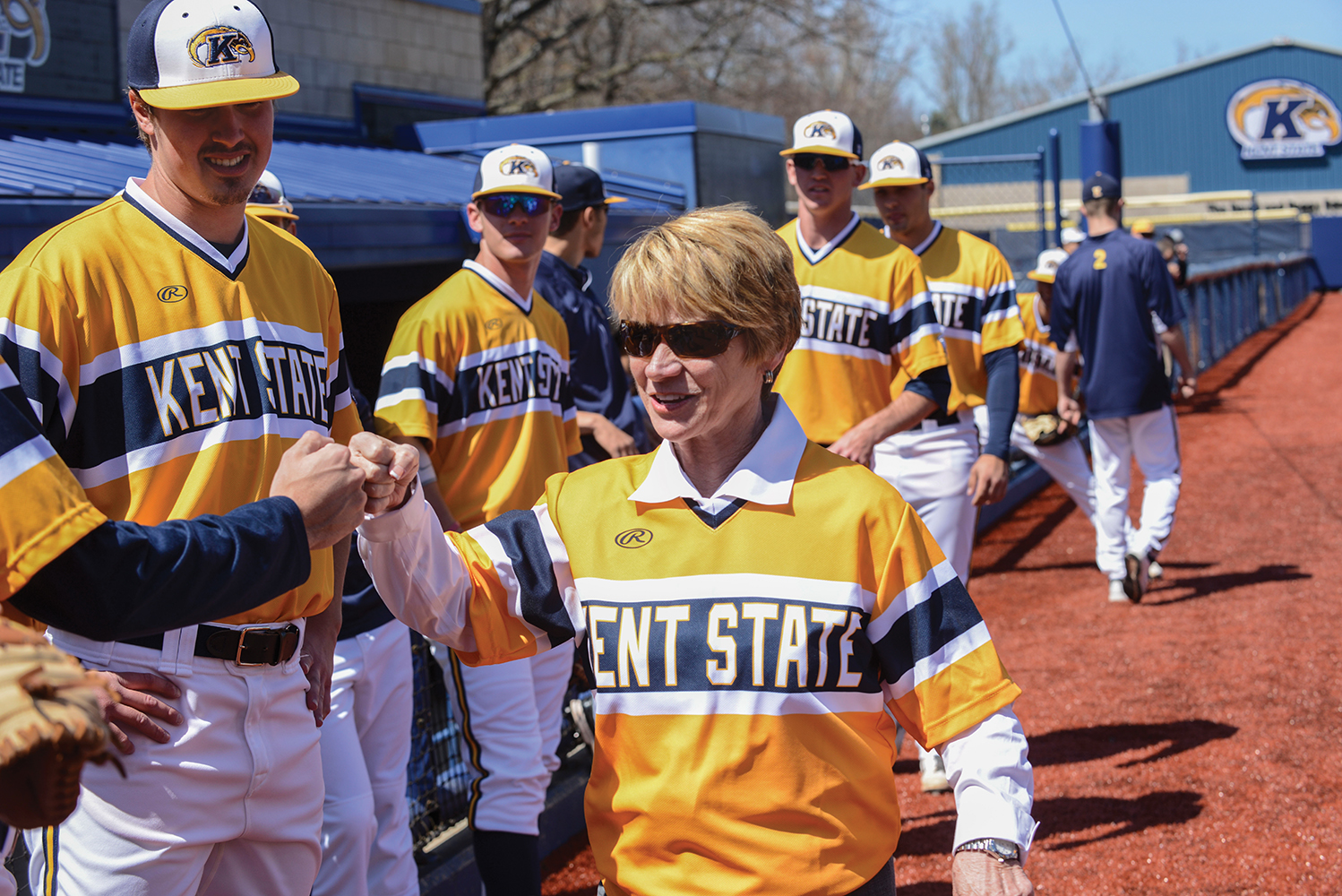 Tuesday, April 28, 2015, 2:59 p.m. Sporting her new baseball jersey while pumping up Kent State baseball players before a doubleheader with the Oakland Golden Grizzlies at Schoonover Stadium. The Golden Flashes offered free admission and food for fans to celebrate the Inauguration. Flashes won game one in extra innings (4-5) and lost game two (4-3). 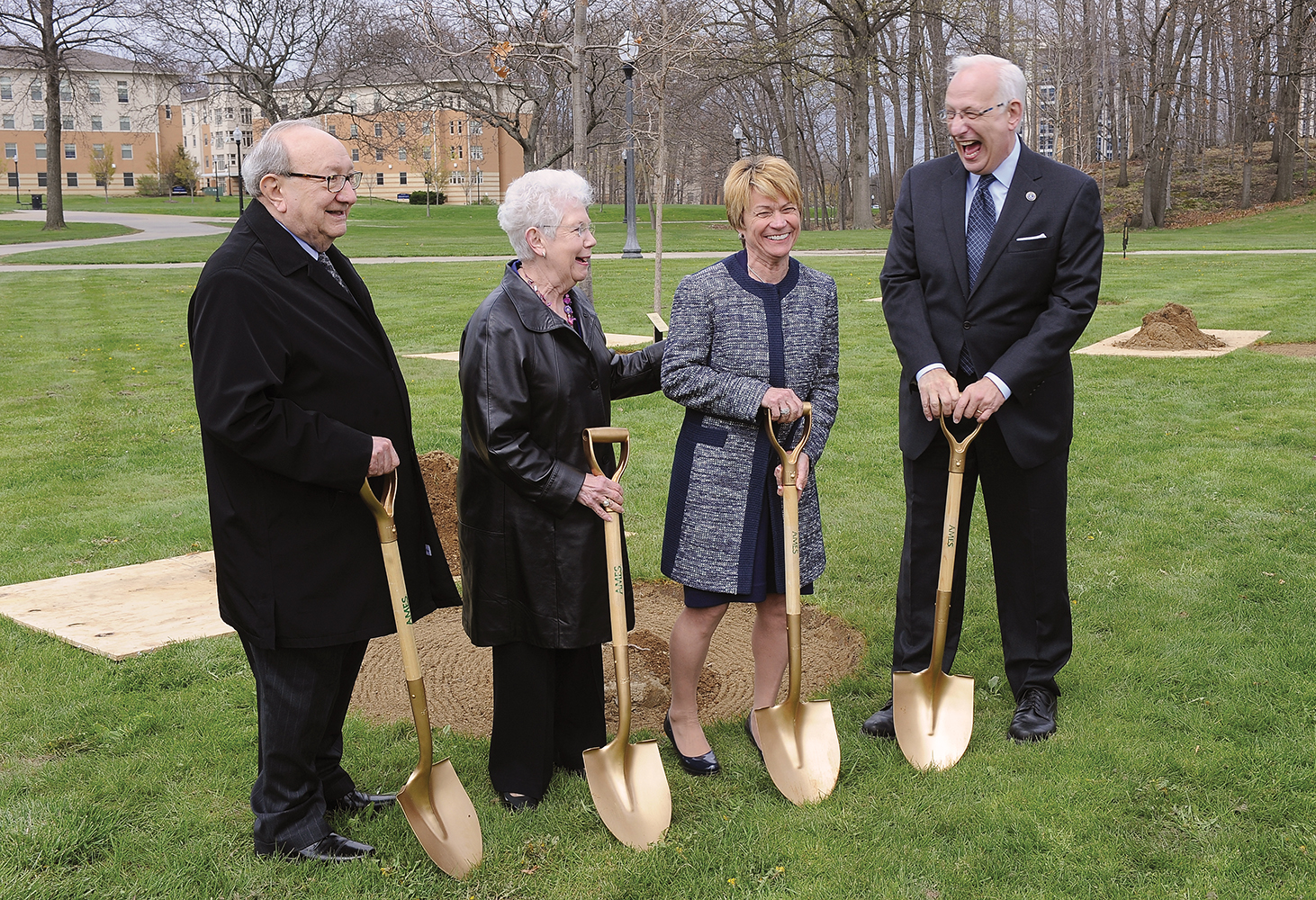 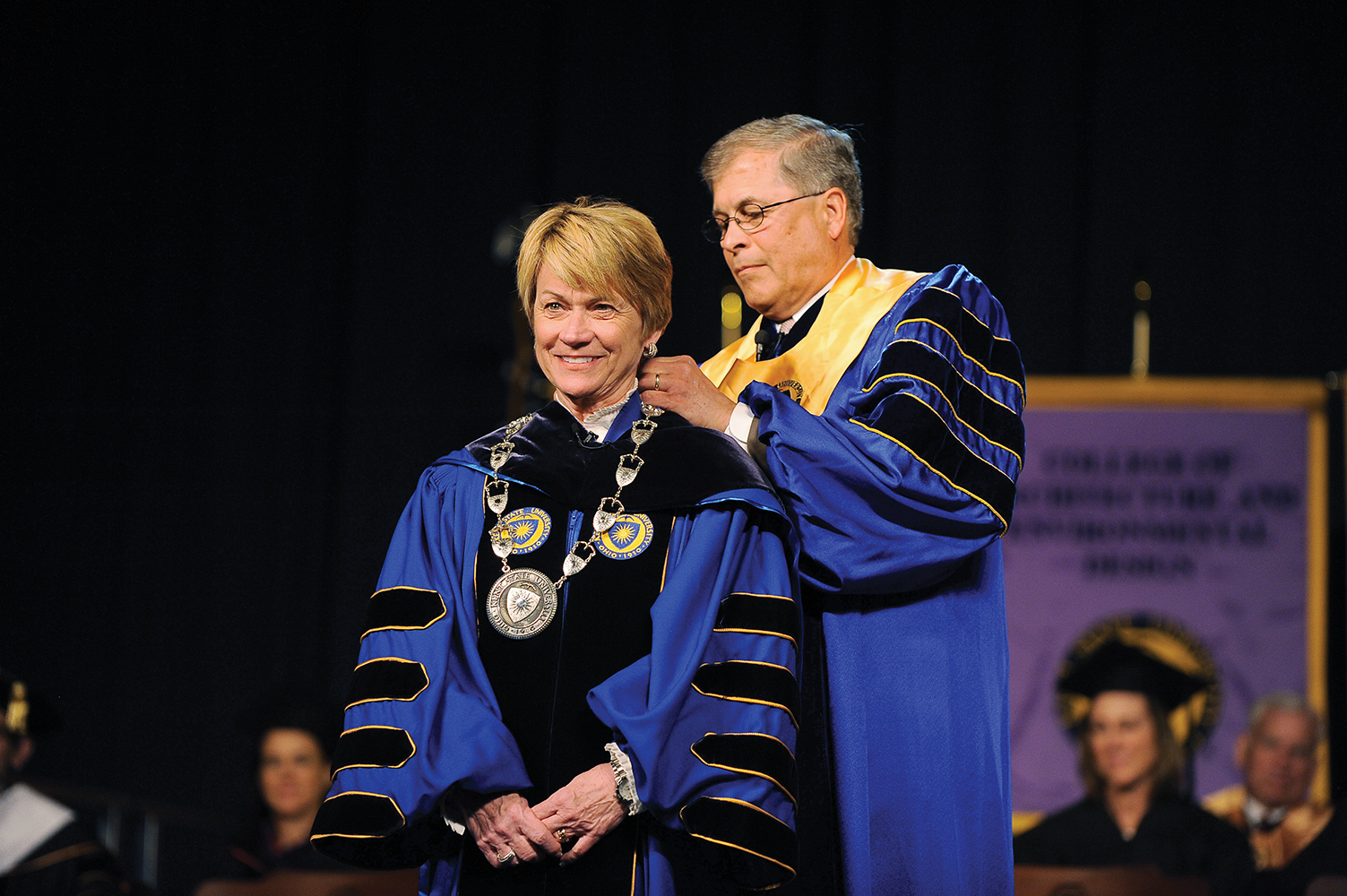 Friday, May 1, 2015, 3 p.m. Receiving the President’s Medallion from Dennis Eckart, Chair of Kent State University Board of Trustees, at her Inauguration as Kent State’s twelfth president. The medallion symbolizes the responsibility of the Office of the President and its central motif is the university seal. 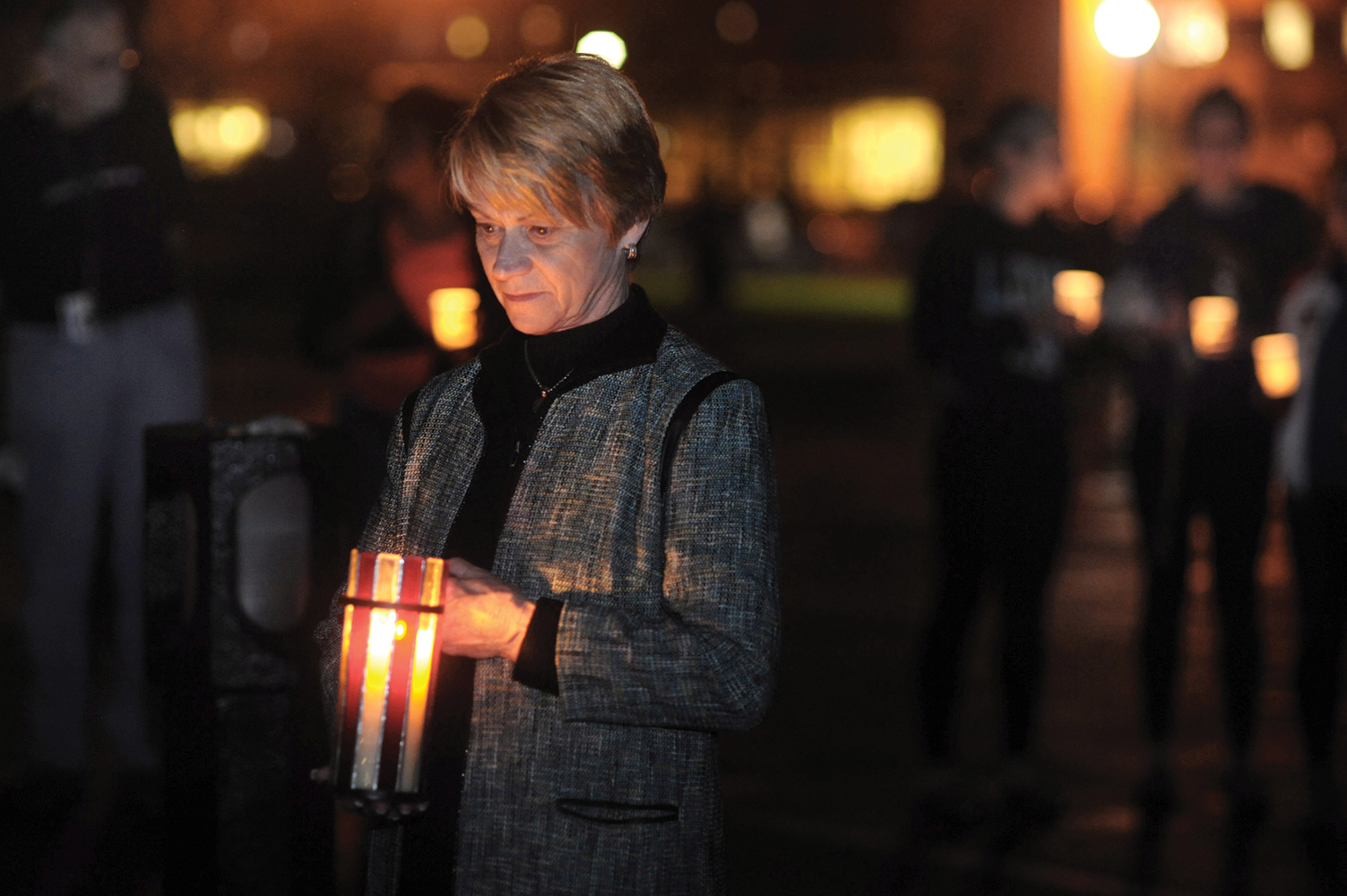 Sunday, May 3, 2015, 11:46 p.m. Standing vigil on the spot where Allison Krause was killed during the May 4, 1970 shootings. “As Kent State pursues an incredibly bright future, we will continue to honor our past,” said Warren, who spoke at the 45th May 4 Commemoration, noting that “we still need to share the lessons of May 4th with a world that remains torn by war and filled with injustice.” 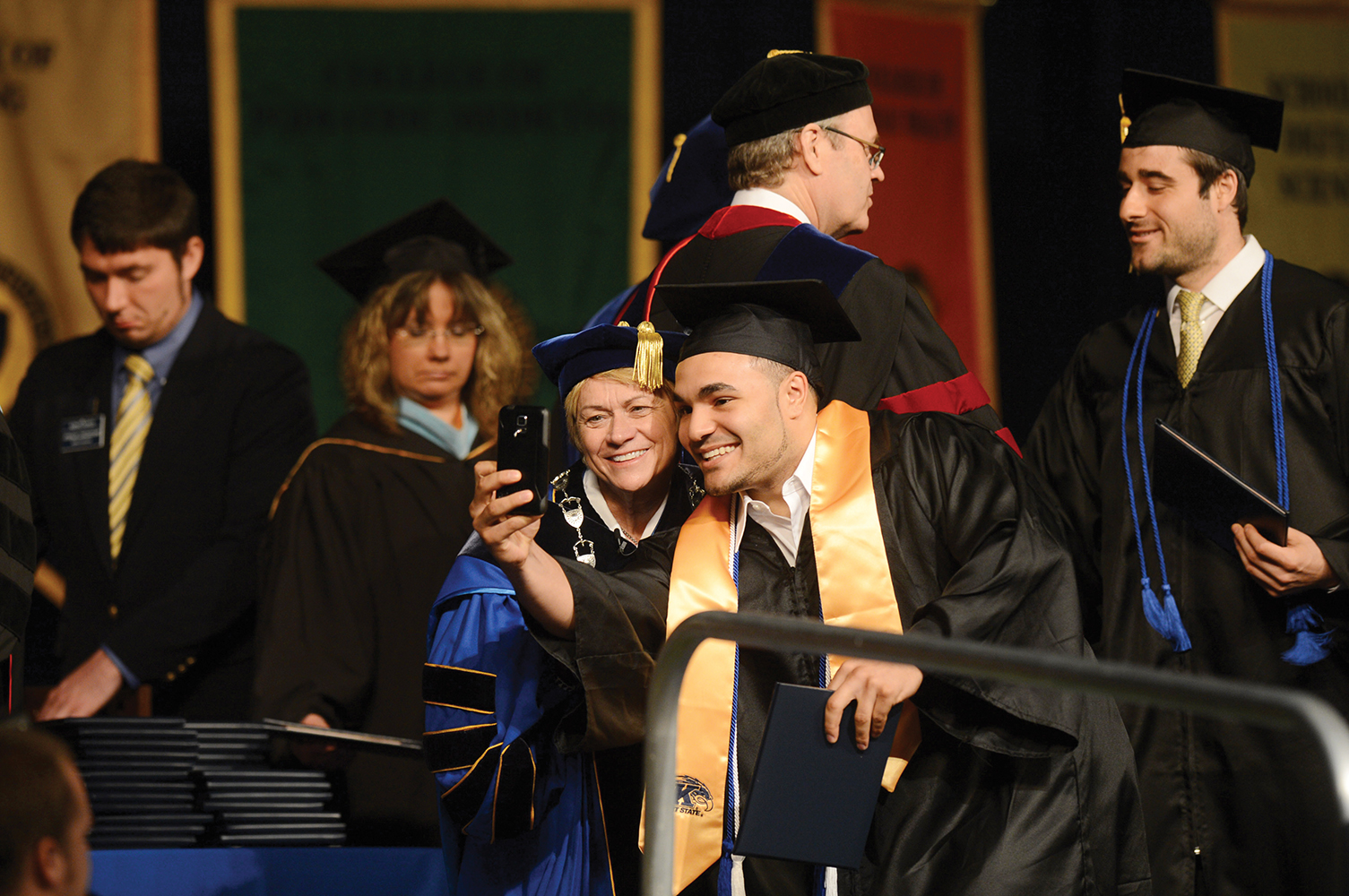 Friday, May 8, 2015, 7:32 p.m. Posing for a selfie with a proud new Kent State graduate after a Commencement ceremony for those receiving their master’s and doctoral degrees. Across the university’s eight-campus system, 4,512 students graduated from Kent State this spring, including those receiving associate degrees.

​“Ten months into the greatest adventure of my life, I stand before you humble, hopeful and so happy to be part of such an extraordinary community.  . . . You have my pledge that I will be a president whose leadership reflects our great hopes, respects our unique history, and always seeks the highest ground. I will approach my work with the dedication and the passion I see in Kent State faculty and staff members; the energy and the enthusiasm of Kent State students; the loyalty and pride of Kent State alumni—and the bold confidence of every black squirrel that ever raced across Summit Street.”
—President Beverly Warren, May 1, 2015, Inaugural Address. (Read the complete address.)