Carolyn Conway Novak, BA ’10, Cleveland, received a “25 under 35” award from her high school, Saint Joseph Academy, in recognition for compassionate leadership, service in a global society, overall achievements and spirituality. Novak, who majored in political science at KSU, is a social activist who fosters relationships with community leaders, citizens and those working for positive change.

Meghan Hennessey Shimmin, BSE ’10, Cleveland, received a “25 under 35” award from her high school, Saint Joseph Academy, in recognition for compassionate leadership, service in a global society, overall achievements and spirituality. Shimmin, who majored in early childhood education at KSU, has spent her career working in low-income school districts and works to create and implement enjoyable, school-wide activities that foster learning. 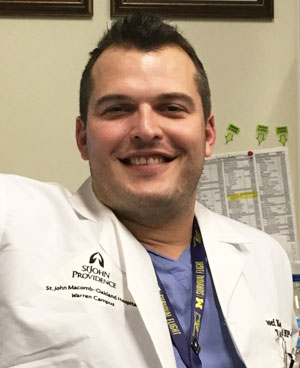 Josef Kotermanski, BSN ’10, Chesterfield, Mich., obtained a Master of Science in Nursing after working in a Detroit emergency room for six years. He currently works in trauma surgery in the Detroit area.

Stephanie (St. Jacques) Walker, MEd ’10, Whitmore Lake, Mich., is now associate director of the Science Learning Center at the University of Michigan. Prior to joining the SLC, she served as director of the Kent State University Academic Success Center

Lauren Kotmel, BA ’11, Cleveland, was named to Crain’s Cleveland Business’s “Twenty in Their 20s” list (in their June issue) of upcoming community leaders to watch in Cleveland’s future. 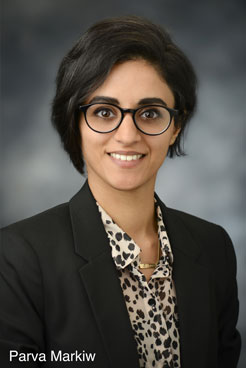 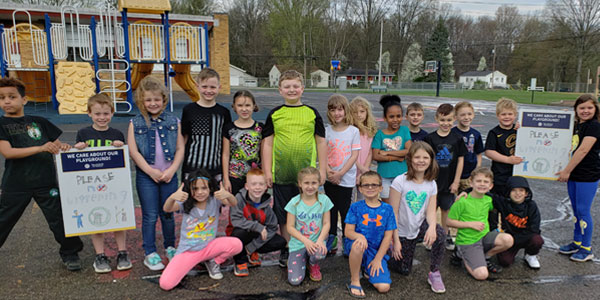 Sara Courie, BA ’13, MAT ’14, Tallmadge, Ohio, a 2nd grade teacher at Dunbar Elementary School in Tallmadge, and Matthew Claney, BS ’13, Greensburg, Pa., a graphic designer, became friends their first weeks on campus through the KSU Marching Golden Flashes—and collaborated after graduation. Courie’s 2nd grade class at Dunbar noticed a lot of trash on the school playground, so she challenged the students to do something to help keep it clean.
When Claney heard that the students had decided to create signs, he volunteered to assist and met with the class through video conferencing. Students came up with sign ideas and voted on the best designs to send him.
To raise funds for the signs, the students recycled plastic water bottles into glitter jars that they sold at school. Claney created a video for the students to illustrate the design process and reveal their final product (see http://bit.ly/CourieClass).

Amelia (Chamberlain) Plunkett, BA ’13, Dayton, Ohio, who moved up the ranks from intern to sales development manager since joining LexisNexis in 2014, was named one of the 2018 Top 25 Women to Watch in Dayton by Women in Business Networking, a program of the Better Business Bureau of Dayton and Miami Valley. The women were honored at the 25 Women to Watch gala in February 2019. She and her husband, Max Plunkett II, BA ’13, family wealth advisor/financial advisor at The Plunkett Group at Morgan Stanley, are both involved in their community and met when they were freshmen at Kent State University.

Kathryn Clarkin, BA ’14, Los Angeles, started a new position as special assistant to the governor at Office of the Governor, State of California, in May 2019.

Corey Conners, BS ’14, Palm Beach Gardens, Fla., who played golf for Kent State from 2010-2014, won the Valero Texas Open at the TPC San Antonio Oaks Course in San Antonio, Texas, in April 2019. He finished 20-under-par with a final round score of 66 to secure his first PGA Tour win, banking a winning purse of $1.35 million and earning a trip to the Masters. 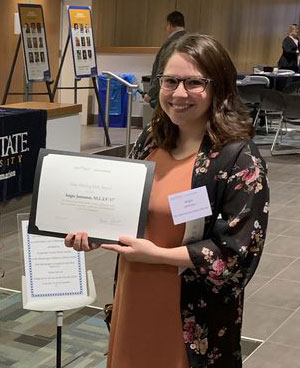 Angela Jameson, BSE ’14, MLIS ’18, Kent, Ohio, library media specialist at Chagrin Falls Schools, was honored by Kent State University School of Information (iSchool) with its Dan MacLachlan Award in Library and Information Science on April 25, 2019. The award is given to a library media specialist who exhibits creativity, leadership and dedication in his/her school.

Meghan Marano, AA ’14, BA ’14, Willoughby, Ohio, associate banking advisor at PNC Bank, was nominated for the inaugural Young Nonprofit Professional of the Year Award in 2019 by the Young Nonprofit Professionals Network of Cleveland. Previously, she was awarded Volunteer of the Year from Youth Opportunities Unlimited in 2017 for her service to youth in communities across NE Ohio.

Sarah Roman, BA ’14, Lakewood, Ohio, received a “25 under 35” award from her high school, Saint Joseph Academy, in recognition for compassionate leadership, service in a global society, overall achievements and spirituality. Roman, who majored in art history at KSU, uses art to help others work through painful experiences and difficult times. 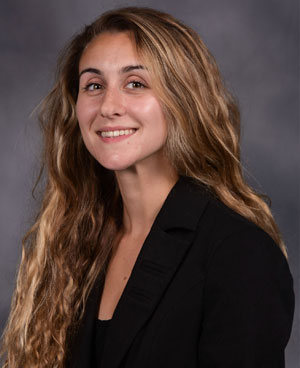 Jasmine Hoff,  AAS ’16, BSN ’17, MSN ’19, Cleveland, was appointed by Ohio Governor Mike DeWine to a two-year term as a graduate student trustee of the Kent State University Board of Trustees. Hoff’s term began June 11 and ends May 16, 2021. She is pursuing a doctorate in nursing practice and an adult gerontology acute care nurse practitioner graduate certificate. A registered nurse who has achieved board certification, she currently serves as assistant nurse manager at Cleveland Clinic’s Heart and Lung Transplant Unit in Cleveland and as adjunct faculty in Kent State’s College of Nursing.

Laura Roch, BS ’16, Youngstown, Ohio, accepted a position with Notre Dame Mission Volunteers AmeriCorps as the site director for Northeast Ohio (Cleveland/Youngstown). Among other duties, she will be recruiting potential AmeriCorps members and nonprofit educational sites in the Northeast Ohio area, doing member training, and assisting with leadership skills and professional development.’ 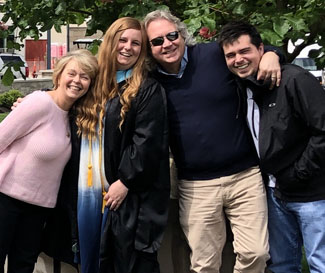 Torey Frame, BA ’17, Atwater, Ohio, is the first full-time female officer in Streetsboro in over 20 years. She graduated with a degree in criminology and psychology and decided to pursue law enforcement as a career.

Chad Kozan, BA ’17, CER1 ’18, Madison, Ohio, is a natural resources officer for the Ohio Department of Natural Resources, specializing in marine and operating-while-under-the influence enforcement. He gives back to the community as a boating instructor on a volunteer basis and is attending Bowling Green State University for a master’s degree in criminal justice. 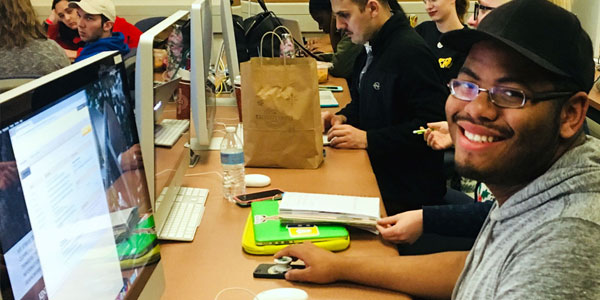 Brandon Bounds, BS ’19, Columbus, Ohio, associate producer at 10TV.com, was part of a team of top journalism students from 19 universities who earned the 2019 Student Edward R. Murrow Award for Excellence in Digital Reporting for their project “Hate in America.” Their package of multimedia stories focused on acts of intolerance, racism and hate crimes across the country, as part of the Carnegie-Knight News21 program, an in-depth journalism collaborative based at Arizona State University’s Walter Cronkite School of Journalism and Mass Communication. Kent State’s School of Journalism and Mass Communication recognized Bounds earlier this year with the Robert G. McGruder Student Award for Diversity, for his work on the project, which also received a 2019 Robert F. Kennedy Journalism Award in the college category. The 2019 winners were recognized at the Edward R. Murrow Awards black tie event hosted by the Radio Television Digital News Association Oct. 24 in New York City.

Emma Buss, BBA ’19, New Philadelphia, Ohio, was hired as marketing services coordinator by Whitemeyer Advertising, where she interned in summer 2018. Her responsibilities include assisting account executives in digital and social media marketing strategies and media research and implementation, along with operations and client service responsibilities. 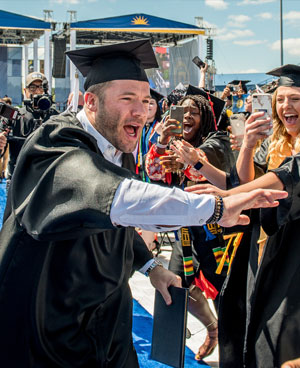 Julian Edelman, BIS ’19, Boston, former Golden Flash quarterback, current Patriots wide receiver, three-time Super Bowl champion, 2018 Super Bowl MVP, 2015 Homecoming Parade Grand Marshal and Varsity “K” Hall of Fame Inductee, finished the degree he started working toward in 2006. Prior to attending the Commencement ceremony in May 2019 to receive his diploma, he said he had completed a Bachelor of Integrative Studies degree to keep a promise he made to his parents more than 10 years ago and set an example for his daughter.