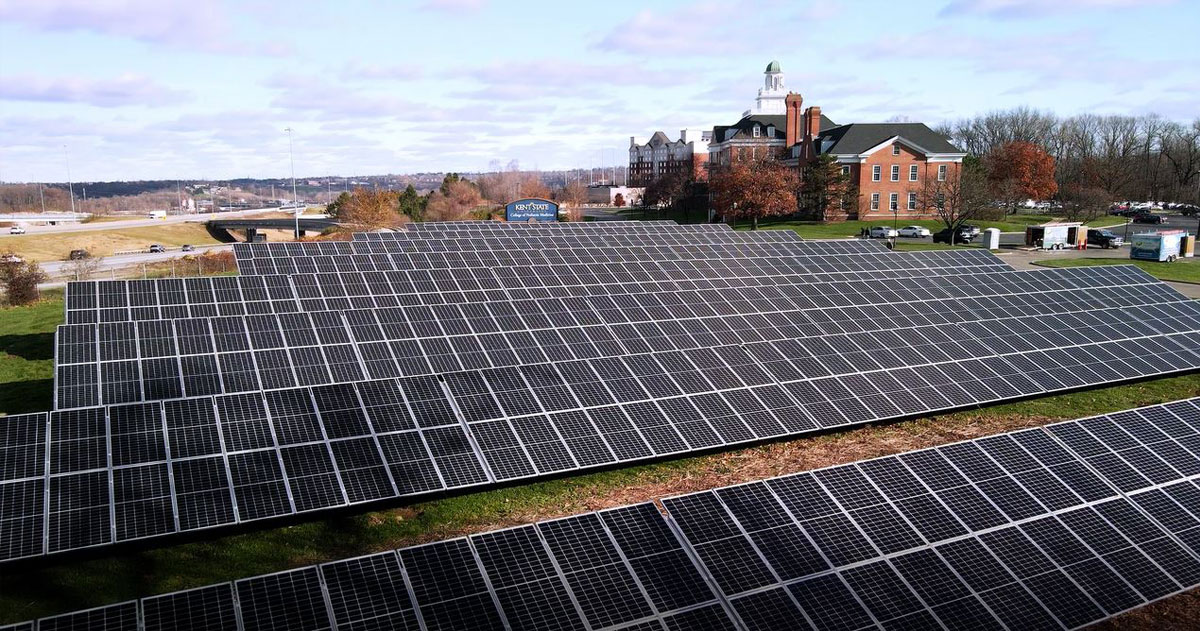 Solar array at the College of Podiatric Medicine in Independence, Ohio.

Kent State continues to establish itself as a leader in sustainability and environmental stewardship with solar installations—to attract students in environmental studies and research, to help our planet and to save money.

The university’s first solar array was installed through a power purchase agreement on the roof of the Field House on the Kent Campus. A third-party developer owned the solar array but sold the power to Kent State. Upon completion in summer 2012 it was the largest roof-mounted solar photovoltaic (PV) panel electrical system within the University System of Ohio. Kent State now owns the solar panel system. Electricity from the panels provides about one-third of the power required for the combined Field House and Dix Stadium facilities.

With renewed interest in solar energy by Kent State’s leadership, in 2020-21 Kent State added solar arrays at six of its regional campuses (Ashtabula, East Liverpool, Geauga, Salem, Stark and Trumbull) as well as at the College of Podiatric Medicine in Independence, Ohio. The new arrays increased the university’s solar energy capacity to 4.24 megawatts-DC and produces about 5,281,000 kWh of electricity. This is enough electricity to power 445 homes each year. While contributing the environmental benefits of solar power, these arrays also are projected to save the university over $3 million in electric cost over 25 years. 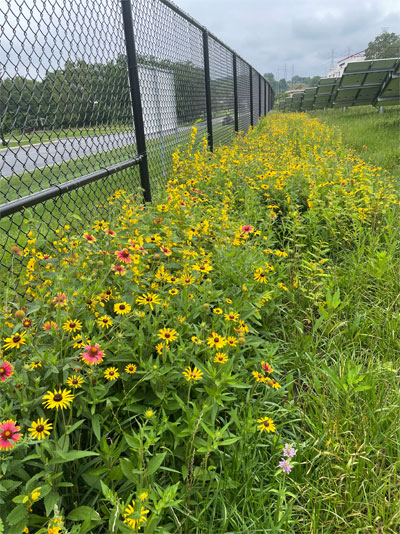 Native perennials attractive to pollinators are planted near the ground-mounted systems to help preserve and promote beneficial bees and insects, slow down rainwater runoff and reduce mowing and its associated air pollution.

Every year, the solar PV arrays are projected to reduce Kent State’s carbon footprint by 4,125 tons of CO2, the equivalent to removing 806 cars from the roads or not burning 421,127 gallons of gasoline, says Bob Misbrener, project manager II of sustainability, energy conservation and commissioning in the Office of the University Architect. He and Melanie Knowles, manager of sustainability at Kent State, recently published an article about Kent State’s new solar arrays in Facilities Manager magazine.

Misbrener points out that the cost of solar energy has dropped by nearly 70% in the past decade. “Solar panel efficiency is also always improving, along with battery storage,” he says. However, there are current demand, supply chain and federal regulatory issues that are causing difficulty obtaining panels and batteries, delaying projects and eroding some of the prior cost reductions.

Solar energy dashboards are also active for many of the solar arrays (Ashtabula, East Liverpool, Geauga, Salem and Trumbull). Check out the dashboards linked under their sections on the National Solar Tour page of the Kent State Sustainability website. (Kent State was part of the American Solar Energy Society’s National Solar Tour and the society’s local “Ohio Wish You Were Here” tour in fall 2021.)

The university plans to have up to an additional 3.5 megawatts of ground-mounted solar PV panels installed on a vacant site just east of the Kent Campus. This system, which will include a 1.54 MWh battery storage system, is currently planned to be operational by late fall 2023.