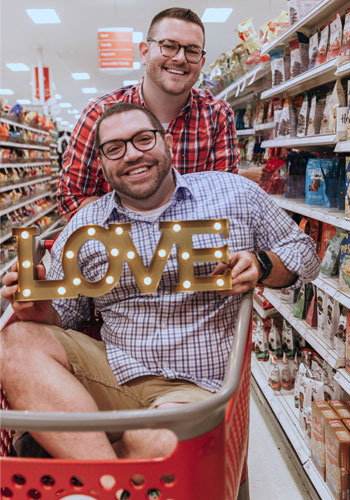 Shopping at Target has been a favorite pastime of Tony DiPasqua, MEd ’12, and current KSU student Aaron Damron, since the beginning of their relationship several years ago.

“When we first started dating, we quickly figured out that we shared the same interests—including shopping,” DiPasqua says. “We’d often grab lunch on Saturday and head to Target afterwards. We love wandering the aisles looking for deals and spending time together.”

So when the couple discussed potential engagement photo locations, they decided to forgo more typical settings in favor of their local Target store in Erie, Pa. Their engagement photos, taken in mid-July, show them cruising the aisles, tracking down deals and stocking up on essentials.

Like many couples these days, they shared their photos on Facebook. Little did they know the post would go viral: it was shared almost 20,000 times and liked over 100,000 times.  Within 24 hours, many major news organizations were covering their fun engagement shoot.

“We never thought (or intended) for it to be shared so widely, but love that it brought a smile to so many people,” DiPasqua says. “We’ve received countless comments and messages from all over the world saying how much the photos have touched their hearts.”

A love for Target isn't the only thing the couple has in common. Both of them love Kent State.

“The people at Kent State made me feel like a member of the family,” DiPasqua says.  “I made so many friends that I’m still in contact with today. Aaron is currently enrolled in the LPN-RN bridge program at Kent State Ashtabula and says the same thing about his experience—the Kent State community truly cares about their students.”

We wish them a Target-filled gift table and much happiness! —Ashley Whaley, BS ’06, MEd ’12