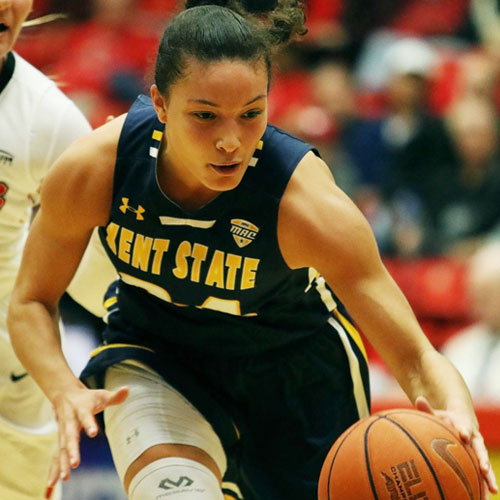 With the last name Golden, an illustrious collegiate career at Kent State University seemed almost destined to be for this student-athlete. In reality, it was through focused effort and determination that Alexa Golden, BA ’18, MA ’19, Kent, Ohio, made a name for herself at Kent State.

On the basketball court and in the classroom, Golden strove for excellence and achieved it. Her accomplishments in academics, athletics, service and leadership throughout her college career led to her nomination for this year’s NCAA (National Collegiate Athletics Association) Woman of the Year Award—among a record high of 585 graduating female college athletes nominated by NCAA member schools to honor their top graduating student-athletes.

Golden, a three-time Academic All-MAC honoree, has the distinction of being the only player in Kent State women’s basketball history to total 500 points, 500 rebounds, 200 assists, 200 steals and 100 three-point field goals. This past season, Golden’s senior year, she started all 33 games and averaged 7.6 points, 5.6 rebounds, 2.8 steals and 2.5 assists per game.

In April, she received the Judith K. Devine Excellence in Leadership Award, which recognizes a senior Kent State student-athlete who demonstrates leadership abilities within their team, department, collegial unit and community. “I hope to help other student-athletes with the [leadership] skills I learned along the way,” Golden says.

This unrelenting drive is nothing new to Golden, who maintained a 3.7 GPA while competing and completing two degrees in four years. She took college-level classes during high school, which allowed her to earn her bachelor’s degree in criminal justice/safety studies in two and half years. Earlier this year, she completed her master’s degree in sport and fitness administration/management, adding that academic accomplishment to her mounting list of achievements. —Bethany Sava, BS ’12