Speaking Up for Infants 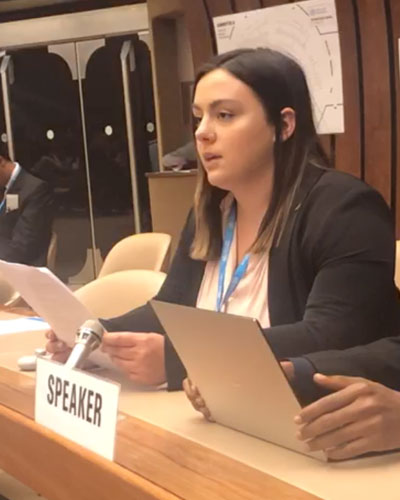 Katie Campbell, BS ’18, Brighton, England, is putting her Kent State education in public health to work at the global level. This May, Campbell presented at the 72nd World Health Assembly annual meeting in Geneva, Switzerland. The assembly is the decision-making body of the World Health Organization (WHO) and provides a forum to discuss, debate and decide global health policies.

Campbell testified on behalf of the International Baby Food Action Network, a global network of organizations dedicated to reducing infant mortality by promoting optimal infant feeding practices. She was presented with this opportunity as a result of her internship with UK–based Baby Milk Action, part of the network.

In her first statement, Campbell called on the WHO to support efforts “to ensure publicly funded universal health coverage, with primary health care and prevention” and to make breastfeeding promotion available to all. She warned delegates of the risks associated with relying on privatized health services that prioritize commercial interests. In her second statement, she called on the WHO to avoid conflicts of interest that arise when noncommunicable disease prevention efforts are created via corporate partnerships.

After graduating from Kent State’s College of Public Health, Campbell enrolled in a master’s program at the University of Brighton in England, where she studied health promotion. With her coursework completed, she is focused on writing her master’s thesis, which consists of an analysis of interview data from fathers in 12 different countries regarding the role of fathers in breastfeeding.

Her future aspirations are to work in the health policy arena. “My experience with Baby Milk Action and my involvement in the World Health Assembly have convinced me that major changes in health can be accomplished through health policy,” Campbell says.  “That’s why I want to pursue a career either at the federal level back home in the States or with a UN organization.”

When asked for any advice to students, she says, “Take any opportunities that come to you; don’t be afraid. I was terrified to speak, but it was a once-in-a-lifetime chance that I knew I had to take.” —Julie Miller, BS ’87