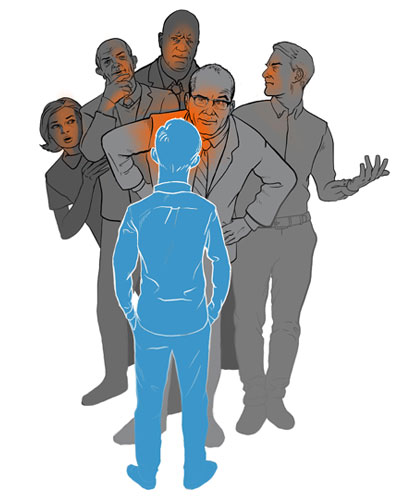 “I went to Kent State starting in 1973 because my father was an assistant dean in the College of Arts and Sciences. The activities offered for one night during Freshman Week were a reception upstairs in the Student Union featuring the university president, Glenn A. Olds, and a welcome party downstairs at the Rathskeller pub.

I attempted to enter the Rathskeller, but at the time I was 17 years old. The bouncer at the door, who was a Delta Tau Delta fraternity brother of my sophomore older brother, recognized me as he checked my ID and said I could not come in because I was underage. Instead of stamping the back of my hand, he playfully stamped my forehead and, forgetting this, I resigned myself to attending the upstairs reception.

At the reception, I first met my father’s boss, the dean of the College of Arts and Sciences. I next shook hands and briefly talked with President Olds, who told me he knew my father. I then recognized one of my father’s student office assistants. She was there with her parents, and I was introduced and sat down with them. After a short time, she leaned over toward me and whispered, ‘Do you know that it says “F#@* You” on your forehead?’

Immediately after I graduated from KSU, I ended up working directly for President Olds at his next position as president of what was then called Alaska Methodist University in Anchorage for most of 1978 before I went to graduate school in upstate New York. I never brought up this particular incident with him.”­