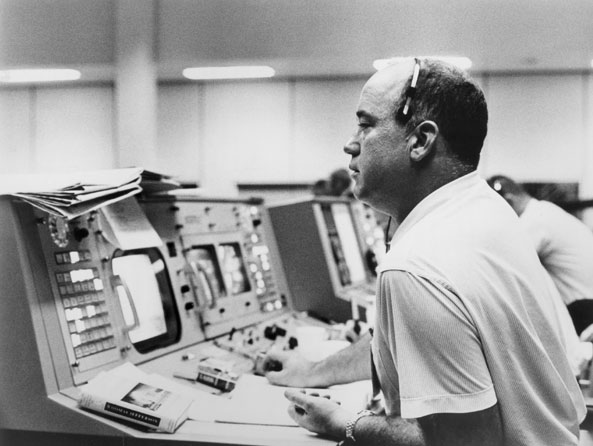 This year’s 50th anniversary of the Apollo 11 moon landing on July 20, 1969, brought to mind a KSU alumnus who served as NASA’s first news director during early missions to the moon.

While growing up in Tallmadge, Ohio, Paul Haney, BA ’51, probably never dreamed he would be the one to make this profound announcement to the world after a dramatic countdown to a mission in space. But as the National Aeronautics and Space Administration’s (NASA) “Voice of Mission Control,” he delivered that line and more in his famous, measured tones.

Building a Foundation of Journalistic Excellence Haney put himself through Kent State University by working nights for the Associated Press. While at Kent State, he majored in journalism and worked at the Daily Kent Stater, as well as the Chestnut Burr.

Role of a Lifetime Haney worked for several newspapers after graduation, but three months after NASA was formed in 1958, he joined as an information officer. Then, from 1960-62, he served as NASA’s first news director. In this role, he managed the Cape Canaveral and Project Mercury information programs, where his work in the Mercury program set the standard for all subsequent NASA information efforts.

From 1962-63, Haney served as public affairs officer for the Office of Manned Space Flight (now the Johnson Space Center), and directed the information coming out of the Gemini and Apollo manned spaceflight programs. It was in this position that he became known as the “Voice of NASA’s Mission Control” and the “Voice of Apollo.”

Haney served NASA with distinction throughout the Gemini program and the early phases of the Apollo program, and left NASA in 1969 after the successful Apollo 9 mission.

Historical Legacy Haney received the 1963 William D. Taylor Journalism Alumnus of the Year award, the most prestigious award given by Kent State’s School of Journalism and Mass Communication. He was inducted into the International Space Hall of Fame in 1993.

Haney passed away on May 28, 2009, but like those three iconic words, his legacy will live on forever. —Stephanie Langguth, BS ’03