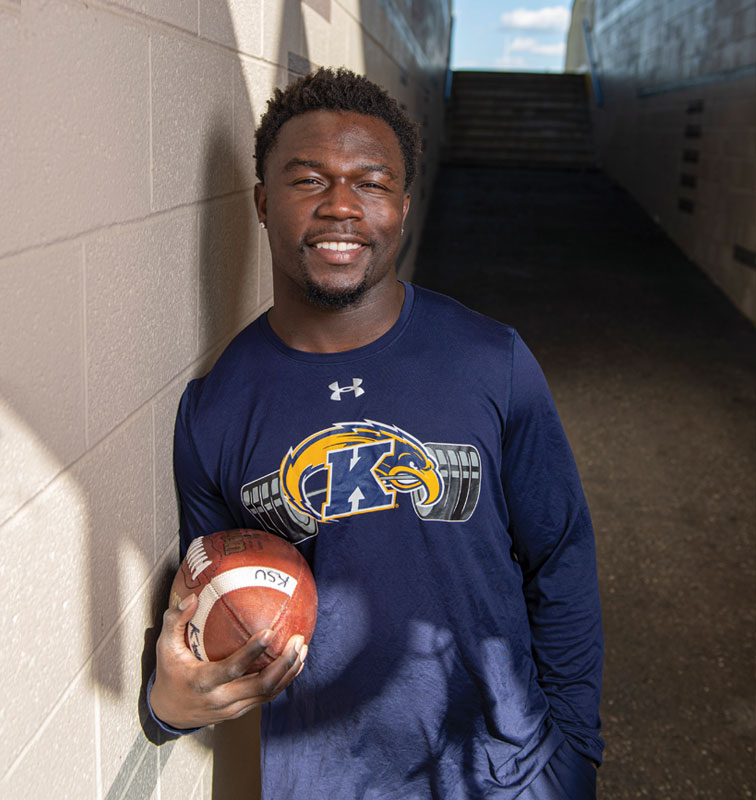 Antwan Dixon beat a rare disease. Now he does the heavy lifting for others in need.

In summer 2016, when a rare and serious blood disorder struck Kent State football wide receiver Antwan Dixon, it could have ended his college football career.

Dixon had made his debut at Kent State in fall 2015 by scoring a 20-yard touchdown on his first catch against Delaware State, and during his rookie season he led the Flashes in receiving yards (355 on 26 catches).

Then a recurrence of aplastic anemia, a condition that occurs when the body stops producing enough new blood cells, forced him to leave school for treatment. Doctors had first diagnosed Dixon with the blood disorder—which can cause exhaustion, high risk of infections and uncontrolled bleeding—when he was 16, attending South Fort Myers High School in Florida.

During his second go-round with the disorder, his weight dropped to 125 pounds, he was hospitalized, and he underwent chemo treatments before receiving a life-saving bone marrow transplant from his father, Anthony, in April 2017. He returned to Kent State in January 2018 and doctors cleared him to play six months later.

With grit and determination, Dixon fought his way back to the gridiron for the fall 2018-19 season. He led the team with 52 catches, the most by a Kent State player since 2014, and finished second on the team with 532 receiving yards.

“I had a lot to prove to myself,” he says. “I felt like I had to come back and show people that I had not given up, that I was performing better than before.”

Dixon’s efforts did not go unnoticed. In addition to being one of three athletes to receive the 2018 Mayo Clinic Comeback Player of the Year award, he was named 2018 Male Athlete of the Year by the Touchdown Club of Columbus and nominated for the 2018 Capital One Orange Bowl- FWAA Courage Award.

Dixon’s journey back to health and to Kent State’s football program was a difficult endeavor. However, he says his illness has proven to be a catalyst that challenges him to push for excellence on and off the field.

“One out of every million teens get this disorder,” Dixon says. “All my awards are a blessing, but my blood disorder is a blessing, too. It is something that makes me push myself harder.”

“It is great to have [Antwan] Dixon back,” says Head Coach Sean Lewis. “He has a full year under his belt; more importantly, a full year of growth and training. He has worked tremendously hard this offseason. I am excited to see what he can do with his mental and physical development. His energy and the excitement he brings on a daily basis is contagious.”

"All my awards are a blessing, but my blood disorder is a blessing, too. It is something that makes me push myself harder."

Dixon recently demonstrated that enthusiasm as he championed a cause in which he believes. In July 2019, as he trained for the upcoming football season, he served as a leader for the Kent State football chapter of Uplifting Athletes during his team’s inaugural Lift for Life fundraiser to support the rare disease community. (Uplifting Athletes’ mission is to be a catalyst for the medical community to find cures for rare diseases, which are described as affecting fewer than 200,000 Americans and typically lacking financial incentive to make and market new treatments, according to the organization’s website.)

The event was a competition between the Flashes offense and defense to see who could average the most repetitions lifting 225- pound weights.

“This is a rare event,” Dixon noted on Instagram prior to the competition, “where we raise money for people who can’t afford their hospital bills and people who have rare diseases like mine.”

Dixon, who previously had been a finalist for the 11th Uplifting Athletes Rare Disease Champion Award, is president of the Kent State chapter, and teammate defensive back Jamal Parker is vice president. Both lifted during the event.

How did Dixon—who is majoring in organizational communication with a minor in psychology—make such a strong comeback to Kent State with enough vigor to attend classes, play college football and lead a charity event?

“I have been following the plans from my coaches and doing everything they ask me to do,” he says. “They want the best for us—the best training facilities, the best food plans and the best practice plans. I follow the process that the coach has mapped out for us.”

Dixon fell in love with football at the age of four, when at 6 a.m. on Saturday mornings he would wake his dad to play football. Now he continues to have tremendous support from his parents and extended family.

During the 2018 season, his grandmother surprised him by attending a game against Howard University, but he did not get to play because of a hip injury. His mother, Shemariah, and his aunt came to see him play in the Ole Miss game later in the month.

Now embracing his senior year as a Golden Flash, he is excited to show his folks and the Golden Flash family that he is back—all the way back.