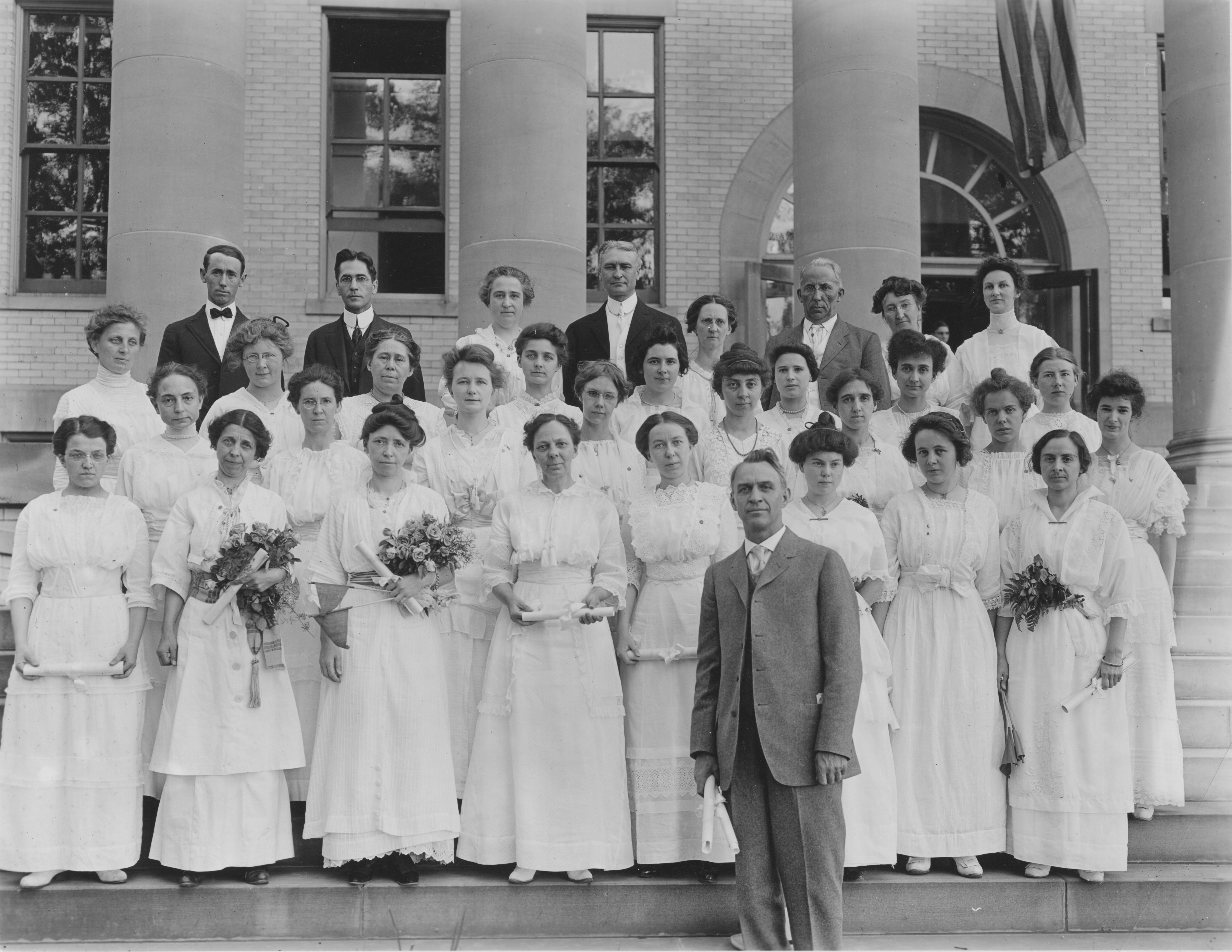 President John McGilvrey and faculty members pose proudly with the first graduating class in 1914 on the steps of Merrill Hall, the first building completed on campus.

Most of those students and faculty members gathered for a photograph on the steps of Merrill Hall, which housed the library, administrative offices and classrooms (see above). The first building on campus, it had been completed in time to host the first classes on campus at the beginning of the first summer term, May 19, 1913. That first session was attended by 47 students, along with 20 faculty members.

It seems implausible that a group of 34 students could have completed the work to earn two-year diplomas just one year later. However, prior to the completion of Merrill Hall, Kent State Normal School had been holding classes in 25 Northeastern Ohio communities, which was the foundation for Kent State’s regional campus system.

Thanks to the extraordinary vision and leadership of Kent State’s first president, John Edward McGilvrey, the school had grown quickly and gained a strong reputation. Known for his principled belief that education should be available to every citizen, President McGilvrey persuaded the Trustees to make instruction free and set room-and-board costs at $4.00 per week. Many presidents of other state schools followed his lead.

Due to the rapid growth of Kent State Normal School’s population—extension enrollment passed 1,600 in spring 1914 and on-campus registration totalled 1,378 in the summer term that followed—several tent classrooms and a wooden pavilion, known as the Tabernacle, were hastily erected among the grove of trees just north of Merrill Hall, in an area now known as Front Campus.

In his Commencement address to the crowd of 3,000 people who jammed the Tabernacle and the lawns around it on that warm July day, Ohio’s governor, James Cox, congratulated Kent State Normal School’s “auspicious beginning,” and called the school a “great institution,” one regarded “as a model, an example, as an inspiration to the other institutions in Ohio.”

As one of two normal schools in northern Ohio established in 1910 by the Ohio General Assembly’s passing of the Lowry Act—to provide training and professional development for teachers—Kent State Normal School was already graduating teachers, while the other normal school, Bowling Green, was still a year away from offering its first courses.

Fast forward 103 years, and Kent State University celebrated its first One University Commencement Ceremony at Dix Stadium on May 13, 2017, as graduates from all eight campuses were convened and honored in one ceremony.

More information and photos from Kent State’s One University Commencement Ceremony this spring.