“I thought it was a starter job,” says Riccio, who came to Kent State in 1969, after receiving his Ph.D. in experimental psychology from Princeton and serving three years in the military. “But I discovered that the department is both productive and collegial—two things that don’t often go together. It’s a great place to work.” 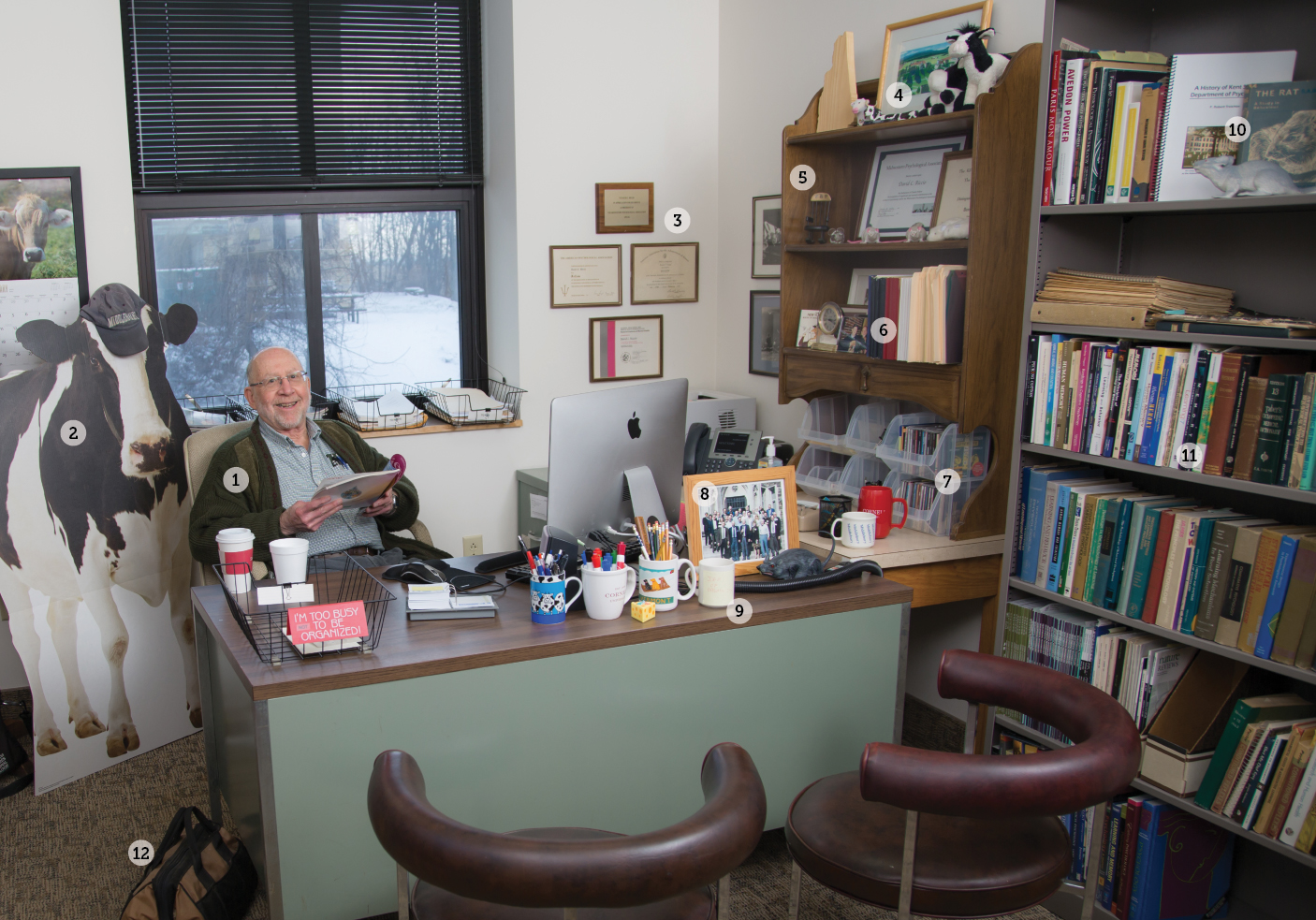 1. David Riccio: Currently teaching an undergraduate course on basic learning and memory and a special topics course on memory functions and dysfunctions, Riccio often shares clippings on current events to keep his classes topical. His research focuses on learning and memory processes in animals, and he’s maintained an active research program by virtue of his undergraduate and graduate students—more than 40 of whom have earned their Ph.D.s while working in the Riccio Lab.

2. Cows: “Vermont is my favorite state—and it has a lot of cows,” says Riccio. “Cows aren’t very smart, but they’re peaceful and nice to look at. I get a cow calendar every year, and people give me cow-related things.” One of his sons gave him the large cow cutout for his birthday one year.

3. Awards: Among his many awards and honors, Riccio has received Kent State’s Distinguished Teaching Award (1979) and the Distinguished Scholar Award (1997).

4. Print of Middlebury’s campus: Riccio graduated from Middlebury College in 1959, and this colorful print of the campus is by well-known Vermont artist/printmaker Sabra Field, who also attended Middlebury. “I’m very fond of the place,” says Riccio. “I’ve gone to my 50th and 55th Reunion and all that.”

5. Rocking chair: Early in his career, Riccio was invited to join a Midwestern group of researchers whose German name translates as The Society of Unending Research. “We’d critique one another’s papers. Once you reach age 40, they throw you out and give you this miniature rocking chair.”

6. Legal pads: Before he got comfortable with typing on a computer, Riccio handwrote all his manuscripts on legal pads, and he still keeps a supply on hand. He has served as consulting editor and reviewer for many journals and has published more than 200 papers in refereed journals, including two in Science. “They reject about 95 percent of what they get.”

7. CDs: Riccio keeps an eclectic mix of CDs in his office. He plays “You’ve Got to be Carefully Taught” from the musical South Pacific for students in his basic learning class when he teaches about the roots of prejudice. “I use it to get a point across: Most of what we know comes through learning.”

8. Group photo: This photo, taken outside the psychology building at Princeton, is from his mentor Byron Campbell’s Festschrift—a celebration of scholarship, usually upon retirement. It includes Riccio and a number of his former students who did post-docs with Campbell and are part of his academic family tree.

9. Jar of Opportunities: To encourage students to read the papers he assigns, Riccio puts their names in this “jar,” draws one at random each class and has that person present on the paper. “It could also be called the Jar of Terror, but it’s an opportunity to show us what you’ve learned.”

10. Rats and mice: Riccio’s lab uses rats and mice to examine cognitive issues (long viewed as the exclusive realm of human research), and he’s received many rat and mouse toys and figures from students. His amnesia research with rats has generated substantial evidence that trauma does not erase memory (as some hypothesize), but affects its retrieval.

11. Textbook: Riccio co-authored the textbook Memory: Phenomena and Principles, Spear and Riccio (1994), which demonstrates the potential for animal studies of cognition to increase understanding of human cognition. “I think I’ve received $50 in royalties over the years.”

12. Bag of bocce balls: “We used to play bocce in front of Kent Hall around noon, but we haven’t done it for a couple years. People say, ‘We should start doing that again.’ We will.” 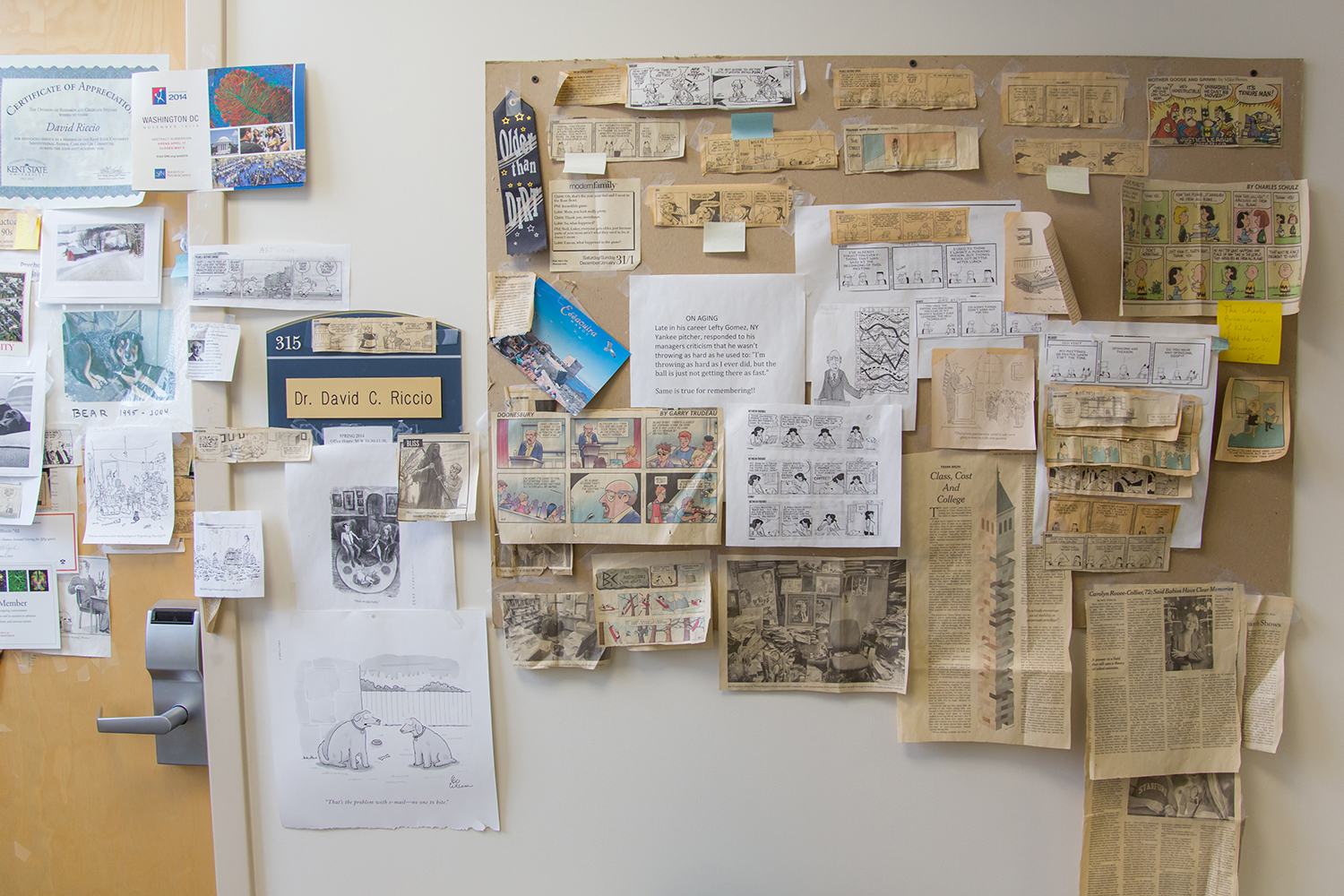 Cartoons (above): Riccio collects cartoons (many from The New Yorker) on various topics—including dogs (he has two), meetings, academia and aging—and posts them on his door and the bulletin board outside his office. “They’re fun to look at.”