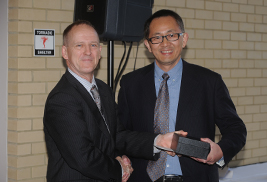 Liquid crystal displays (LCDs) have become ubiquitous in our daily life, in televisions, phones, computers and projectors, and they comprise a market that makes more than $100 billion annually. The research and development of liquid crystals is moving rapidly beyond display applications and evolving into entirely new and fascinating scientific frontiers. This is in part because of the work of Quan Li, Ph.D., who is one of this year’s recipients of the Kent State University Outstanding Research and Scholarship Award.

Li is a senior research fellow and director of the Organic Synthesis and Advanced Materials Laboratory at Kent State’s Liquid Crystal Institute® and also serves as an adjunct professor in the Chemical Physics Interdisciplinary Program. He received the award for his significant scholarly contributions in the science of liquid crystals, nanomaterials, dynamic photonics, and energy-saving and energy-harvesting technologies.

Li also edits and writes chapters for textbooks, provides entries for encyclopedias and publishes many peer-reviewed papers in top scientific journals that are highly recognized worldwide. His scientific outreach is apparent from his many invited talks, plenary sessions and in national and international conferences. He also serves as an active panel member and reviewer for many federal funding agencies and publishing houses.

Kent State’s Outstanding Research and Scholarship Awards recognize outstanding faculty members for their notable scholarly contributions that have brought acknowledgement to their fields of study and to Kent State.

"My research is often on the forefront of societal needs," says Li. "It embraces renewable energy to smart dynamic photonics and beyond."

Li first learned of his selection when he received a phone call from Michael Bloom, Ph.D., Kent State’s associate vice president for corporate engagement and commercialization in the Division of Research and Sponsored Programs.

Li says he would like to thank many people in accepting this award.

"In addition to thanking the distinguished colleagues who nominated me and those who strongly supported the nomination, I would like to thank my talented students and my distinguished collaborators and friends who have helped me stand out," says Li. "I would also like to extend my thanks to the colleagues and friends in the Sponsored Programs Office, Office of Transfer Technology, Liquid Crystal Institute and Chemical Physics Interdisciplinary Program."

Li has edited four books in the past four years and has written more than 20 book chapters and encyclopedia entries, along with many journal publications and patents. Over the past several years, he has been a principal investigator and project director in federal projects totaling $15 million, supported by federal agencies that include the Department of Defense, the Department of Energy, NASA and the National Science Foundation, among other funding institutions. Li has also sponsored and advised 17 postdoctoral associates and several Ph.D. students.