2000 SPANGLES: DRESSES FOR THE PARTY OF THE MILLENIUM

Where will you be for the party of the millennium? The event that ushers in more than a change in the calendar but a new era: the inauguration of the first woman president of the United States. Few things are certain but some are inevitable.

When American women obtained the right to vote in 1920, they changed the political arena forever. At the dawn of the new millennium, women have attained positions of leadership and power that many thought impossible a century ago. The ultimate party of the millennium will be an occasion for joy, a celebration of true balance in democracy and an affirmation of the contributions of all our citizens.

Strengthened by women's achievements in the last century, let us embrace the future and look forward to the day when the last barrier of gender inequality is overcome. Let us tap into the national resources of women's strength and determination, and encourage them to run for political office at all levels, including the presidency.

This exhibition showcases the creativity of American designers and envisions the brilliant and glorious evening that will forever be engraved in people's minds as the party of the millennium. 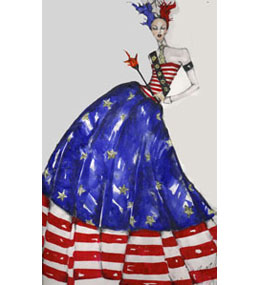