THE AGE OF NUDITY

We live in an era where less is more and informality is the norm. Although we might think that very little can shock us, fashion has a way of continually make us reassess our standards of propriety. The clothes we wear are part of an infinitely complex cultural system that can change with time and space. If understanding fashion today is a delicate process, looking back in time is a mine field, but the process is essential as few things are more intimately linked to a person's existence and sense of self.

The period from 1780 to 1825 is one of rapid transitions and offers many parallels with our times. Heavily defined by an appreciation for strong and healthy bodies and marked by a love of nature and the growing importance of sports, the idealism brought about by the rediscovery of ancient Greek and Roman culture in the first half of the eighteenth century led to changes in art, politics and culture that affect us to this day. In addition to igniting new interest in philosophy and systems of government, Classicism brought back an impossible standard of perfection and vigor to the human body. By the last quarter of the century, two types of children's clothes no longer designed to mimic adult garments were worn: the white linen "frock," a one piece dress with a high waistline and a deep neckline, and the skeleton suit, a bodice and trousers ensemble buttoned at the waist. These were intended to strengthen young children's bodies by exposing them to the elements as well as give them more ease to play. If on the one hand children were liberated from hair pomade and powder and from the boned stays that once molded their bodies to achieve perfect posture, they also were immersed in cold water at a time when baths were taken only rarely and for therapeutic reasons. Ancient stoicism was at play and helped to propel the child's frock to new heights.

As the neoclassical admiration for statuesque nudity influenced the world of fashion, women began to abandon conical boned stays and thick brocades for thinner fabrics such as the semi-transparent muslins that outlined the figure and helped to suggest the clinging drapery of Classical times. The color palette became lighter and more suggestive of the natural or "naked" look. Unadorned simplicity came to the forefront with the emergence of the chemisegown, brought to the world's attention in 1783 by Elizabeth Vigée-Lebrun's scandalous portrait of Queen Marie-Antoinette wearing what many considered to be underclothes. After over a century of using the change of chemise, or shift, as the means to cleanse the body in lieu of using water, this garment was skin by proxy and, as a result, the new gown was truly appalling to many.

Considered immodest, indecent and a sign of social decay by some, the extreme fashions of the late 18th and early 19th centuries expressed the political, social and artistic unrest of their era. What was first worn in a state of "undress" soon became the fashion. The artifacts presented here trace the transformation of the typical 18th century silhouette into the linear high-waist style of the early 19th century. As described by Abigail Adams during her European residency in the 1780s, fabrics became "as light and thin as possible" and art and morality collided in this new vision of the body. 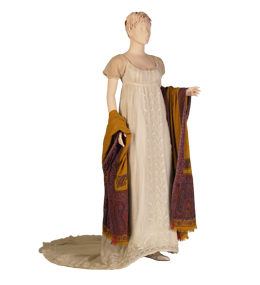