AIR OF THE EAST: FASHION ART FROM KOREA

This exhibition features the wearable art works of 55 innovative Korean artists who attempt to show fashion in a new light, not only in its functional and practical aspects but also as an imaginative and contemporary art form. This exciting exhibition is on display in the U.S. at only 3 venues: Parsons School of Design in New York, The Fashion Institute of Design and Merchandising in Los Angeles and the Kent State University Museum.

Wearable Art is an art form that began in the early 1970s as "Art to Wear": one of a kind pieces of clothing made outside the mainstream of fashion. Artists would use clothing simply as a medium without reference to current commercial fashion. In the 70s, true "wearable art" was meant to be worn. Today, wearable art has transformed to become more sculptural, in other words, artwork that is in the shape of clothing but is not generally meant to be worn. Most of the pieces in the show are not meant to be worn but are meant to be viewed and enjoyed as a work of art.

Media used in "Air of East" clothing designs include: textiles, wire, paper, tape, horse hair,metal, beads, twine, newspaper, tree bark, mirrors, ornamental birds, yarn, cork, rubber,glass, silk flowers, wood, Chinese ink, sponges, dried flowers, and much more. These various types of media allow each artist to create their own spectacular garment. For example, one of the more "wearable" pieces in the exhibition is a lovely, willowy green satin high-necked gown embellished with hand-made rosettes on the bodice which were crafted by folding and interlocking together satin bias and horse hair bands. There is also a dress called "Web Dress in White" that's fashioned completely from wire, beads and twine. In another example, large shavings of wood bark are used with leather to form a skirt.

This idea for the American debut of this exhibition was conceived in a very interesting manner. Museum Director, Jean Druesedow, was interested in bringing Korean wearable art to the U.S., and to Kent. Prior to joining the KSU Museum in 1993, Ms. Druesedow was with the Costume Society of the Metropolitan Museum of Art, NY where she taught fashion history classes at NYU. One of her former students, Ms. Kyoung Hee Cho, is the assistant professor and chair of the fashion department at one of the Korean women universities.

Every other year, Kyuong and 55 other Korean women who are mostly professors in departments of fashion design and clothing & textiles, have done a large exhibition of wearable art. They also publish a catalog. Jean suggested to Kyoung that the next time they do a catalog of their works, they should bring an exhibition based on the catalog to the United States on "tour". She would commit to having the exhibition at The Kent State University Museum, where one of the Museum's key missions is to provide diverse exhibitions of world culture through fashion and decorative arts. (Other recent Asian art exhibitions have included "Japanese by Design – Issey Miyake, Rei Kawakubo, and Yohji Yamamoto", a current display of stunning Ikat Robes from Central Asia, and an on-going exhibition of gold and ivory carvings from China; an upcoming exhibition of Photographs of Tibet is planned for October 2001).

The Parsons School of Design in New York and The Fashion Institute for Design and Merchandising in Los Angeles also agreed to host the exhibition. This is the first time the works of the Korean artists/professors have been shown in the United States: it is currently at the Parsons School of Design Gallery (thru January 16, 2001), then at The Kent State University Museum (February 21 to September 2, 2001) and then on its final destination at The Fashion Institute of Design and Merchandising in Los Angeles (October to December 17, 2001) before returning to Korea. 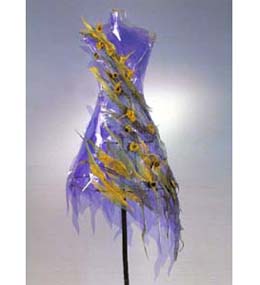