A love of the natural world and a reverence for the materials he uses has led Dean Harris to create sculptural jewelry that has struck a cord with his clientele since the inception of his company in 1998. His graceful approach produces organic shapes, fluid lines and geometric compositions that are at times Spartan in a field defined by extravagance. Fascinated by the deeply psychological need we have for adornment, and attentive to fashion's growing informality, he believes that "anything can be jewelry."

With an opened-mind and adventurous spirit, Dean Harris explores his craft. Trained in fashion design at Los Angeles Trade Technical College, Dean tried his hand in the fashion, theater and television industries on the West Coast before moving East in 1996. Working in New York for a company that produced fashion shows worldwide, he met stylists and editors who later served as catalysts when he launched his company in December 1998, having taken only a few classes in jewelry-making at the Fashion Institute of Technology. While working on fashion shows for Marc Jacobs, an association that lasted seven years, he met Brana Wolf, a stylist for Louis Vuitton, in Paris. She asked to see his jewelry and loved it. The next thing he knew, his jewelry was on the September 1999 cover of Harper's Bazaar! With this cover and six pieces of jewelry, he went to Barney's New York to test his luck. After complying with their request to see more pieces, he brought in twenty items and a continuing retailing association began. The fashion world embraced him and, after only a year in business, the Council of Fashion Designers of America (CFDA) bestowed on him the Perry Ellis Award for best new accessory designer. It all started with gold wire. Reminiscent of the phoenix's fiery death and rebirth from its ashes, gold's astonishing recovery from oxidation through polishing inspired Dean to play with the precious metal. Captured by its warm color and glow, he hammered wire into hoops of different shapes. The work evolved into rings, earrings, bracelets and necklaces with an appealing hand-crafted quality and light weight. The wire grew into a vine and, to catch the eye, he added beads and stones.

From his urban jungle, the artist continues to bring beauty to the world. Studying old and new materials, Dean constantly experiments with organic elements, metals and minerals including rare woods, fossils, mammoth ivory, beetle wings, coconut beads and porcupine quills. Further recognition has ensued: in 2003, his branch tiara was displayed at the Metropolitan Museum of Art. In 2004, he dedicated himself fully to his craft and was the only jeweler among the ten finalists for the CFDA/Vogue Fashion Fund. In 2005, this grant competition was documented by Douglas Keeve in the film Seamless. The same year, his work was included in Sample, a book published by Phaidon Press that showcased 100 designers to watch in the new millennium. With great pride, we present the work of this emerging American creator. 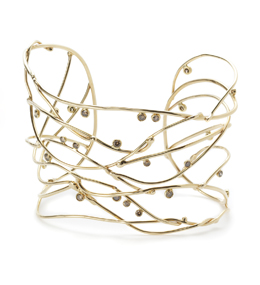