The artistry of Adrian is displayed in the clean lines, dexterity with fabric and his consummate expression of imagination and humor that exists in every piece of clothing, costume, or creation. Adrian effortlessly combined garment construction skills, an understanding of the feminine image, and a graphic conception of the body to provide allure in wearable clothing. He shaped young Hollywood actresses into movie stars, transforming perceived figure faults into alluring assets. He galvanized the image of American women on the world stage by combining national feminine vitality with grace and sophistication.

Born in 1903 in Naugatuck Connecticut, Adrian's talents at drawing and his vivid imagination were revealed early on. Against his parents' reservations, Adrian enrolled in The New York School of Fine and Applied Arts (currently Parsons School of Design). After a rather lackluster year due to low grades, the school sent Adrian to the Paris affiliate in the hopes that the artistically rich surroundings would be enough to hold the young student's interests. While in Paris, Irving Berlin invited Adrian to create the costumes for his Music Box Review of 1921 after seeing a piece that Adrian had designed and made for a school friend. At the age of 18, less then one year after he started school in Paris, Adrian left school and sailed back to New York to start his costuming career. Natacha Rambova, the actress and wife of Rudolph Valentino, invited Adrian to Hollywood to design costumes for two of her husband's films. Once in Hollywood, Adrian soon began working for the famed movie director, Cecil B. DeMille. In 1928, DeMille merged his production company with MGM and brought Adrian along as costume designer. Adrian stayed with MGM, and quickly became their top costume designer working with the best of MGM actresses in over 200 films.

Adrian was responsible for creating and refining the images of actresses such as Joan Crawford, Norma Shearer, Jean Harlow and his favorite, Greta Garbo. Highlighting each woman's most appealing traits, he created the illusion of effortless perfection. Known for his extensive research and his understanding of character development, Adrian helped these actresses to explore and understand their character all while looking their most captivating.

By the late 1930s the Hollywood machine was reacting to WWII and the nation's slow recovery from the Great Depression. Gone were the big budgets for over the top dazzling costumes that Adrian was accustomed to and instead a call for more realistic and " down to earth" films and costumes reflecting the sober attitude of a country at war. Knowing that he needed all or nothing, Adrian decided to leave Hollywood and open a private retail business. For years stores had been copying Adrian gowns, such as the dress to the right from Letty Lynton, which is reported to have sold 50,000 units at the Macy's New York store alone. In 1942, Adrian opened his shop on Wilshire Boulevard in Beverly Hills and quickly arranged to sell to one store in every major city.

From 1942 to 1952 Adrian created gowns and smart suits that many women treasured years after they bought them. Adrian infused all his pieces with the charm that he learned in Hollywood with the practicality and design innovation that he perceived women needed and wanted. Adrian formed an impressive collection of garments that continue to influence and be seen in the work of today's designers. 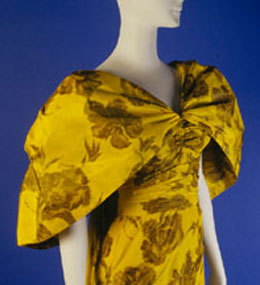