Initially called "Iridescent Ware" by the Fenton Art Glass Company in late 1907, this innovative glassware typically featured a vivid metallic sheen of changing hues on pressed glass articles made in highly-patterned molds. The secret behind Fenton s Iridescent Ware was a special spray of metallic salts on the glass while it was very hot.

Within a few months, other glassmaking firms followed Fenton into the marketplace. The new iridescent products from Fenton and these other companies were immensely popular in the United States from 1908 to about 1915 and were even exported to several foreign countries.

In the 1950s, this glassware was being eagerly sought by collectors. Stories abounded that some articles had been used as prizes for midway games, and the phrase "Carnival glass" was coined. National and regional collector clubs were formed, and there has been great interest in Carnival glass ever since.

Who Made Carnival Glass?

Shortly after the innovative "Iridescent Ware" was introduced by the Fenton Art Glass Co. in late 1907, four other American glass manufacturers created their versions of this novel product.

The H. Northwood Co. unveiled its Golden Iris in mid-1908, and the Imperial Glass Co. had Rubigold and Peacock on the market in the fall of 1909. The Dugan Glass Co. and the Millersburg Glass Co. entered the marketplace soon thereafter.

A few other companies made small quantities of iridescent glass, but these five--Fenton, Northwood, Imperial, Dugan and Millersburg--were the major manufacturers.

Founded as a glass decorating firm in Martins Ferry, Ohio, in May 1905, the Fenton Art Glass Co. soon found itself unable to obtain the glassware it needed to fill orders. The company constructed a factory in Williamstown during the fall of 1906 and began making glass there on January 2, 1907. Brothers Frank L. Fenton and John W. Fenton headed the concern, and they were soon joined by three more siblings--Charles Fenton, James Fenton and Robert Fenton. Still in business today, the Fenton Art Glass Company now ranks among the world s foremost producers of handmade colored art glass. Members of the third- and fourth-generations of the Fenton family currently hold key management positions.

Fenton revived its production of "Carnival glass" in 1970, and the company continues to introduce new items in this distinctive glass treatment on a regular basis.

Headed by brothers Harry Northwood and Carl Northwood, this company was heir to a rich tradition of glassmaking. Before immigrating to the United States from England in 1881, Harry had worked closely with his father, John Northwood I, who was a celebrated carver of cameo glass and served as art director at the renowned Stevens & Williams firm near Stourbridge in the West Midlands of England.

Harry was an employee at the Hobbs-Brockunier Glass Co. in Wheeling and at the LaBelle Glass Co. in Bridgeport, Ohio, before heading his own firms during the 1880s and 1890s in Martins Ferry, Ohio; Ellwood City, Pa.; and Indiana, Pa.

Following the lead of Fenton, the Northwood firm introduced its "Golden Iris" in 1908. This vivid orange hue is now called Marigold by those who collect Carnival glass. Within a year or so, the Northwood firm had two more iridescent colors, Florentine and Pomona, on the market, and these were soon followed by Azure, Emerald and Pearl.

Most of the patterns for the company s glassware were designed by Harry Northwood, and many Carnival glass collectors prize articles in his Grape and Cable motif. Numerous Northwood iridescent pieces carry the firm s distinctive trademark, an underlined capital N within a circle: [trademark here? see p. 36 or p. 44 of book].

The deaths of Carl and Harry Northwood in 1918 and 1919, respectively, reversed the fortunes of this successful glassmaking enterprise. The firm went into receivership, followed by bankruptcy proceedings, and it ceased operations for good in late 1925.

With the enthusiastic backing of the Bellaire Board of Trade in late 1901, industrialist Edward Muhleman brought together a group of investors and formed the Imperial Glass Company Sales of the firm's stock were slow, however, and construction of the new glass factory was not complete until early 1904. Factory managers Thomas Shelley and John Owens were in charge of the organization s day-to-day operations, and they likely worked with mouldmaker Carl L. Dorer in designing the patterns for the Imperial s initial glassware lines.

In October 1909, Imperial launched two iridescent glass colors to compete with the Fenton and Northwood concerns. Originally called Rubigold and Peacock, these iridescent treatments are respectively known as Marigold and Amethyst Carnival glass by today s collectors. Within a year or so, the company was trumpeting its Azure, Helios and Old Gold iridescent products as well. The Imperial firm printed large catalogs regularly, and its iridescent glassware was exported to England, where it enjoyed good sales.

The onset of the Great Depression almost ended the Imperial s days, but the enterprise emerged from receivership as the Imperial Glass Corporation in 1931, and many employees held stock in the newly-organized firm. The success of its Candlewick and Cape Cod glassware lines kept Imperial going for several more decades.

In 1973, the Imperial plant became part of Lenox, Inc. In 1981, Lenox sold the plant to Arthur Lorch, a businessman who specialized in rescuing manufacturing companies in distress. His efforts proved to be unsuccessful, however, and the Imperial was resold twice more before finally being liquidated in 1984.

With the financial help of a wealthy uncle in late 1903, brothers Thomas and Alfred Dugan purchased all of the assets of the former Northwood Works of the National Glass Co. combine. The Dugan men had immigrated from England in the early 1880s, and they had worked closely with Harry Northwood for quite some time. Both Dugans had been employees in the Northwood plant since early 1896, and both were well-versed in glassmaking and had held management or supervisory positions. The factory they purchased was in good repair, and the first Dugan products appeared in January 1904.

When Fenton, Northwood and Imperial were producing and selling iridescent glass successfully, the Dugan firm decided to compete with them. In late 1909, a glass industry trade publication mentioned Dugan s "Pearl Iris" and described it as an "iridescent effect on opalescent, which makes a very beautiful and attractive line." This Carnival glass color, now called Peach Opalescent by collectors, is the iridescent hue for which the Dugan firm is best known. A few Dugan products can be found with the company s trademark, a capital D within a diamond.

Other iridescent treatments from the Dugan firm were originally given exotic names such as these: Alba Lustre, African, Aurora Iris, Golden Cameo, and Neola. Although the Dugan men left the firm in late 1912, production of iridescent glassware continued. By mid-1913, the firm was renamed and operated as the Diamond Glass Co. Alfred Dugan returned to the company in early 1916, and the firm continued to make iridescent glassware until it was destroyed by fire on June 27, 1931.

John W. Fenton left Fenton Art Glass in Williamstown, West Virginia, in mid-1908 to promote the idea of a new glass plant in Millersburg. This venture quickly caught on with local businessmen, many of whom became investors in the enterprise. Sales of stock financed the purchase of land, and groundbreaking for the new glass factory took place on September 14, 1908.

The Millersburg-area newspapers reported on every aspect of the plant s construction, and there was much local interest when the state-of-the-art facility was completed in May 1909. The first glass products were crystal, but the Millersburg plant soon decided to ride the wave of enthusiasm for iridescent glassware that had been started by Fenton Art Glass in 1907-08.

In early 1910, the Millersburg company brought out its line of "Radium" glassware. One trade publication described its "brilliancy" as "all the soft colors of changeable silk." Patterns for the new Radium ware were probably designed by John W. Fenton, and there is evidence that some of the firm s products were exported to England.

The Millersburg Glass Co. struggled financially from its outset, and many creditors pursued legal actions against the company during 1911. The firm went into receivership and then into bankruptcy, but one of the key stockholders purchased all of the company s assets with a view to resuming glass production. The Millersburg Glass Co. was reorganized as the Radium Glass Co. in late 1911, but production lasted only a few months before the plant was shut down in May 1911. 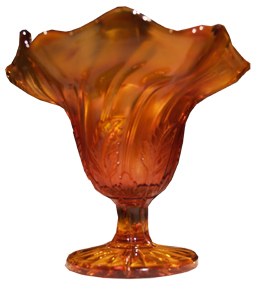