The body of work created by Charles James from 1926 until his death in 1978 has become a touch stone in the history of fashion. Distinctive, colorful and extreme are terms that describe both the clothes and the creator. While much could be said about Charles' personality and lack of business acumen, this exhibition aims to study specific garments from the collection of the Kent State University Museum, The Ohio State University, The Goldstein Museum of Design and Mount Mary College. Aware of his contribution to twentieth century aesthetics, Mr. James encouraged his clients to donate his garments to museums. Early on, he believed in the mission of the design laboratory at the Brooklyn Museum where the first exhibition of his work was presented in 1948. Based in educational institutions, our collections also aim to share with others the works of masters of fashion. A hundred years after his birth, his legacy lives on.

Highly sensitive to beauty and guided by uncompromising idealism, Charles James made fabric obey his will. Always placing ideals before practical considerations, he padded, lined, interfaced, boned and wired cloth and devised numerous construction techniques to build fanciful gowns that transformed women into visions of gracefulness and elegance. Born in comfort within Edwardian society, his paradigm of beauty drew heavily on the decorative aspect of nineteenth-century womanhood and the clothing construction of this era. Like those he inspired, such as Christian Dior, who used James' work as inspiration in his New Look collection of 1947, he put himself above his medium and generated garments that, although visually intoxicating, returned women to an era of discomfort and subjugation. His talents were nonetheless widely sought and his custom-work for clients and collaboration with manufacturers led to new silhouettes that had enormous impact on the fashion industry. His eye for color resulted in unexpected combinations, in which pumpkin and mauve coexisted, linings added drama, and layers of tulle in many colors produced mysterious results. His ability to drape cloth, at times directly on a person, was at the heart of some of his most important work. Yet his legacy in the twenty-first century lies overwhelmingly in his ability to cut the cloth to produce abstract and complex shapes brought to life through experimentation and imagination.

With fluid materials, Charles James created three-dimensional structures that defined his times and helped him find his own path, distinct from those that preceded him. He had the courage of his convictions and sought difficult answers based on body, cloth, and the space between and around them. A perfectionist, he worked tirelessly on improving a design over many years. Though it could seem that the viewer derives more joy from his garments than the wearers, James succeeded in transforming a woman's body into an icon of femininity. Nature subsided. The aesthete and the poet entered. 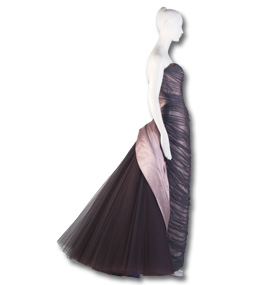