CHARLES KLEIBACKER: MASTER OF THE BIAS

Charles Kleibacker is one of the few American designers to have made a name for himself creating intricate garments in the couture tradition. Instead of mass-produced ready-to-wear, he created a limited number of extremely well-crafted garments that accented body shape and enhanced wearing comfort. Unsatisfied with industrial construction methods, he specialized in hand-sewn assembly techniques that enabled him to produce remarkable designs, many with highly complex bias-cut construction.

Brought up in the ready-to-wear department of his family's department store in Cullman, Alabama, Charles Kleibacker first worked as a reporter in his native state after receiving a degree in journalism from the University of Notre Dame. Employed as an advertising copywriter upon his arrival in New York City, he subsequently landed a job working for the singer Hildegarde, who provided him with a glimpse of the world of Parisian haute couture. From that moment, a passion for design revealed itself and Kleibacker embarked on a life-long journey of discovery.

After spending three years learning the trade as an assistant designer to Antonio Castillo in the house of Lanvin in Paris, Mr. Kleibacker returned to New York in 1958. He designed for Nettie Rosenstein before opening his own studio in 1960. Located at first on 26 West 76th Street, he later moved to larger premises on 23 West 73rd Street. For the next twenty-five years he devoted himself to the creation of fluid garments with a distinctive couture character. A great admirer of Madeleine Vionnet's 1930s construction techniques, Kleibacker explored ways to use all the potentialities of his medium, cloth, by laying out his pattern pieces in several directions to take advantage of the effect of grain on fit.

Many of Kleibacker's garments are cut out on the bias with the pattern pieces set diagonally on the cloth. Were these pieces placed parallel to the fabric selvedge edge or perpendicular to it, the longitudinal warp threads would provide strength, as would, to a lesser degree, the horizontal weft threads. Pieces set diagonally have no direct support threads, and the warp and weft tend to contract and retract in a diamond pattern when the garment is worn. This bias cut allows better fit and greater ease. It also demands superior engineering skills from the designer, since the structure of bias cut cloth changes with gravity over time and the seams must be planned to allow for this growth. These design difficulties explain why production of such garments is limited and better achieved in a couture setting.

Although at odds with his contemporaries in the 1960s, Kleibacker's vision of soft clothes that followed body contour without constricting it returned to the forefront of fashion in the 1970s. Painstakingly engineered and often individually fitted to the wearer's body, his designs were created mostly in neutral colors and high quality fabrics. They were sold for $1,200 to $3,500 in such stores as Hattie Carnegie, Bergdorf-Goodman, Bonwit Teller, Henri Bendel, Martha, Nan Duskin and Neiman-Marcus. Kleibacker's clientele included such celebrities as Gertrude Lawrence, Lady Iris Mountbatten, Diahann Carroll, Mrs. Nelson Rockefeller, Mrs. Richard Nixon during her days as First Lady, Hildegarde, Mary Travers, Jane Pickens Hoving, Regina Resnik, Mrs. Rebekah Harkness, Mrs. Irving Berlin, Mrs. Alfred Drake, Alicia Markova, Zita Davidson and Mrs. L.V. Dodge, to mention but a few.

Charles Kleibacker's name is synonymous not only with superb technique but also with educational outreach. Over the years, he has shared his knowledge with a multitude of students in colleges throughout the United States, and he continues to do so to this day. In September 1984, he accepted a position as designer-in-residence at the Department of Consumer and Textile Sciences of The Ohio State University, where he acted as director and curator of the historic costume collection until October 1995. As designer, collector and curator, Charles Kleibacker has contributed to several exhibitions at The Kent State University Museum. Adjunct faculty member at The Shannon Rodgers and Jerry Silverman School of Fashion Design and Merchandising at Kent State University, he continues to empower students by sharing his technical skills and by encouraging their quest for individuality. 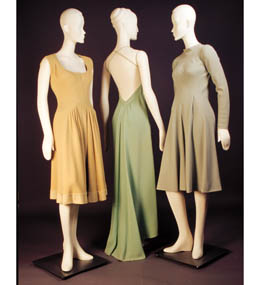