COURT & CONQUEST: OTTOMAN ORIGINS AND THE DESIGN FOR HANDEL'S TAMERLANO AT THE GLIMMERGLASS OPERA

In 1998 the Kent State University Museum presented an exhibition entitled "Court and Conquest: Ottoman Origins and the design for Handel's "Tamerlano" at the Glimmerglass Opera" featuring costumes designed by Judy Levin. The exhibition was organized by the Museum and the AXA Gallery (formerly the Equitable Gallery) with the cooperation of the Glimmerglass Opera, Cooperstown, New York. The AXA Gallery is sponsored by the Equitable Life Assurance Society of the United States.

In 2001, the exhibition will be on display at The Brunei Gallery of The School of Oriental and African Studies of the University of London. The London venue is sponsored by Continental Airlines.

Composed by Handel in 1724, just 25 years after the Treaty of Vienna concluded peace between Eurpoean states and the Ottoman empire, the opera's story of the Central Asian conqueror Timur's epic battle and defeat of the Ottoman sultan Bayezid I, in 1402, had great currency for Handel's audience. The director of the Glimmerglass production, Jonathan Miller, felt that the design of the production should reflect the eighteenth century view of the Ottoman empire and of the historic fifteenth century battle. The challenge met by set designer John Conklin and costume designer Judy Levin was to create a contemporary opera production that fulfilled Dr. Miller's concept for the opera. 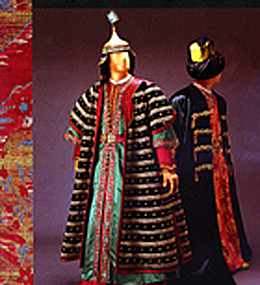