FOR ERIN: A ROYAL REMEMBRANCE

Erin Rachel Pincus was born June 10, 1981, younger by 47 seconds than her twin sister Jessie Amber, to Mike and Kathy Pincus. As their mother has written, "The first night home, a never to be forgotten dream came to my husband of a mischievous leprechaun sitting on top of a big bookshelf. As Erin grew, clearly she represented this elf-some spirit, obviously here on a great lark with her winsome sister who cheerfully sang her way through the house and our life." On the Fourth of July, 1989, Erin suffered an excruciating headache, and before the week was out a brainstem tumor was discovered and removed as far as possible. Benign at first, but ever threatening, Erin's cancer forced her through numerous additional surgeries and treatments. Each time, no matter how difficult, her mother noted, ". . . Erin's love and exuberance would bring her to a new level of recovery. She amazed us and her doctors, event after event." Fighting to retain a normal life, her cheerful optimism kept even her school friends from knowing of her condition. But when Erin was fifteen, the growing tumor was found to be no longer benign. Even after more surgery, and a new type of treatment, immunotherapy, which did seem to kill the cancer cells, Erin's condition was so weakened that she could not survive. She died on January 12, 1997.

From her earliest childhood, Erin had loved Disney cartoons and wanted to be a Disney animator. Kathy Pincus writes that "early on, with her future so uncertain, we wrote to the Disney people, and asked if she could meet one. In 1992, when she was ten, we were lucky enough to be ever so cordially received at the Florida Disney Animation Studio. She got to meet Mark Henn, who had just drawn Jasmine for the upcoming animated feature Alladin. We got a tour, she got to see how things were done . . . . Mark told her she could write to him, so she did; in fact, all through the years. And somehow Mark found time to write back. She would send her artwork, he would tell her about their movies to come. She hoped to be Staff one day . . . . In the last months before Erin died . . . Mark Henn's wife, Pam Henn . . . found a way to try to grant Erin's wish to be accepted as a Disney Staff Animator. She made Erin a beautiful Staff Bag, with Staff t-shirt and hat, and most importantly a book signed by all the Disney animators with signature drawings. It was probably one of the last things Erin really saw. . . ."

A Dress for Erin

On June 25, 1997, Christie's, an auction house with offices in London and New York, conducted a charity auction of 79 dresses from the collection of Diana, Princess of Wales, that raised more than $5.7 million dollars for charities devoted to AIDS and cancer research. Such an unprecedented event was the idea of Prince William, who suggested that such a sale might raise funds for his Mother's favorite causes. At the time of the sale, Princess Diana was quoted as saying, "Words cannot describe my absolute delight at the benefits which the results of this auction will bring to so many people." Shortly after Erin died, the catalogue for the Christie's sale arrived at Pam Henn's home. "Her parents had just informed me of her death, and here was this catalog advertising the auction of Princess Diana's dresses to benefit, among other causes, cancer," she said. "I thought, if I could purchase one of the dresses, then I could use it in the same way. I'd honor a wonderful child and raise philanthropic funds." Bidding by telephone, she successfully acquired Lot 9, a pale pink evening dress embroidered in pearls, designed by Catherine Walker, worn by Princess Diana on a state visit to Pakistan, and recorded by Lord Snowden in an official photograph. Pam Henn purchased the dress in Erin's name and memory. 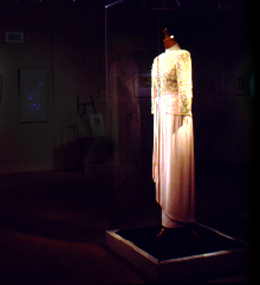