Fashion and decorative arts have long been subject to similar design influences. Although these aesthetic links are not always apparent, they are often part of a greater artistic scheme that applies to other visual arts such as textile design, painting and architecture.

The eighteenth century was marked by at least three distinctive styles: the Baroque, the Rococo and Neoclassicism. The Baroque style was strongest during the reign of Louis XIV (1643-1715) and the forms echoed the strength of this absolute monarch: the style aimed to look grand, impressive and massive. The Rococo style, also called the Louis XV style, was very different and was representative of the reign of this French king (1715-74), although it was most popular before 1750. It was characterized by the presence of scrolling curves and counter-curves which created a strong sense of movement, a love of light colors and a feeling of delicacy. The discovery of Herculaneum (1738) and Pompeii (1748) fueled a love for the styles of ancient Greece and Rome that were to form the basis of Neoclassicism, a style popular through the early part of the nineteenth century.

In addition to these distinctive European styles, many foreign elements entered the design vocabulary of artists. Discoveries of new cultures, aesthetics and costumes ignited a love of exotic styles that was to have major repercussions in the nineteenth century.

Neoclassicism competed with a multitude of design influences early in the nineteenth century. Looking back to previous styles became a strong force throughout this period and, at times, many styles coexisted and created an era marked with eclecticism.

Historicism was one of the most important characteristic of nineteenth century design. The earliest historical style to appear followed a movement called Romanticism, which was once again philosophically opposed to its predecessor, Neoclassicism. Romanticism glorified the exotic and drew from earlier styles, particularly the Middle Ages. As is often the case, literary and philosophical movements ignited new trends in various artistic spheres. The nineteenth century witnessed the renaissance of numerous historical styles from Neo-Gothic to Baroque to Rococo revivals. These styles were to impact fashion and decorative arts equally.

Another important event that impacted design in Europe and America was Japan's international trade re-establishment of 1854. Japanese aesthetics began to seep in and the term Japonisme was used to describe this phenomenon. By the end of the 1870s this word was commonly used in France and was widely known in the Western world. Displays of Japanese objects in several international exhibitions, beginning with one held in London in 1862, enabled people of the middle and upper classes to gain familiarity with Japanese aesthetics. This influence was to have considerable impact on late nineteenth and twentieth century design. 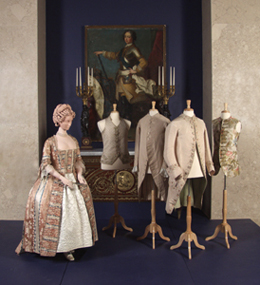