Are there surviving garments which can indicate that fashionable clothes were worn in the Ohio territory from 1790 to 1840, and what can these artifacts convey about late eighteenth and early nineteenth-century Ohio history? This research is object-based and focuses on fashionable garments because they make up the majority of the clothing items that survived and were collected. As a result, this exhibition does not claim to illustrate clothing adopted by all Ohioans since not everyone could afford such goods. Artifacts that have survived the passage of time are tangible means of relating to, questioning and interpreting history. Most garments studied and selected for exhibition were drawn from historical societies in the state of Ohio and are displayed on mannequins. Costume collections outside the state of Ohio also lent artifacts that were used to compare and contrast the garments borrowed with other North American pieces. Those are displayed on dress forms and help to acknowledge that the types of fashionable clothes worn within the state were not limited by geopolitical boundaries. The goal of the exhibition was to seek, find and present artifacts unknown to most Ohio historians and to draw from them a meaning that could shed light on the diversity of settling experiences that occurred within the state. The existence and survival of these artifacts, particularly in the first half of the period from 1790 to 1840, is remarkable for different reasons: it serves to indicate the presence of a type of refined social behavior among individuals who immigrated to the territory, and helps shatter the myth of the settler that is firmly anchored in popular culture and consists of the ruffian-farmer dressed in homespun clothing or the trapper in buckskin. It also brings a certain balance to Ohio's early settlement history by incorporating women's history into the equation, through artifacts made for and used by some of them.As the state of Ohio celebrates its Bicentennial in 2003, it remembers the people who shaped the land and helped define its character. In an effort to embrace a wider variety of experiences, it is important to make use of all the tools available to the historian to help understand and interpret the past. Bringing to the forefront artifacts that may help scholars and the public in this undertaking is a worthy endeavor that can help us understand the intricacies of the past, their roots in the present, and their ability to shape the future. 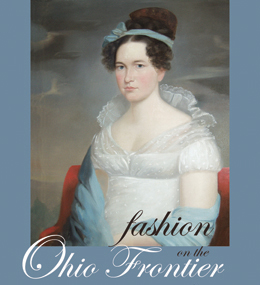