By the second quarter of the nineteenth century, handwoven wool and cotton coverlets kept many Americans warm at night and brightened the beds of the young nation with bold, colorful designs. Often in shades of red, white and blue, utilizing patriotic symbols interspersed with floral and geometric motifs, these coverlets demonstrated pride in country and special events as well as love of color and pattern.

For many decades collectors of early American antiques have found the designs of these woven coverlets intriguing, and have wondered at the circumstances of their creation. Luckily many weavers inscribed coverlets with their names, the places of manufacture and the names of the people for whom the coverlets were made. Luckily for us, scholars and collectors have traced the origins of many of the weavers. For over twenty years Clarita S. Anderson has documented coverlets and has established a database at the University of Maryland. The most recent publication of her work, American Coverlets and Their Weavers, published in 2002 by The Colonial Williamsburg Foundation in association with Ohio University Press, provides information about more than 700 coverlet weavers. However, there are still undocumented coverlets and unidentified weavers, so the project is ongoing. She has found that most of the weavers were first, second or third generation immigrant men from Germany, England, Scotland, Ireland and France with over half of German descent.

The coverlets were woven on hand looms by professional weavers who might also provide carpets and household linens. As the weaving industry mechanized in New England, the hand loom weavers moved to the Mid-Atlantic and Midwestern states where most of these coverlets were made for middle class customers. The looms were draw looms, barrel looms or those fitted with then new Jacquard attachments that could create curvilinear designs and lettering mechanically. The Jacquard loom, developed by Joseph Marie Jacquard, was first exhibited at the Industrial Exposition at Paris in 1801. It is thought to have arrived in America and been fitted for coverlet and carpet weaving by 1825. This invention made figured and fancy pattern weaving efficient, economical and affordable for the middle class who relished the variety of designs available to them. Most weavers probably purchased paper patterns for their designs, the majority following popular taste. Some weavers purchased a license for a certain geographic area or a franchise that provided a loom and materials in return for part of the income, but most weavers seem to have owned their own looms and lived in the communities where they worked. Weavers might supply the natural cotton warp and weft for coverlets but use homespun and dyed wool provided by the customer for the colored wefts.

The coverlets in the museum's collection are woven with two different structures, double weave and a structure known as tied Beiderwand. Double woven cloth consists of two separate cloths woven simultaneously and joined together according to a pattern. The cloths are joined when the warps forming the back cloth are brought forward and the warps forming the front are taken back, creating a reversible design. Thus, in the case of the blue and white coverlets in the exhibition, where they are blue on one side they are white on the other. The interchange of colors forms an air pocket that adds to the warmth to the coverlet. Doublecloth requires two sets of warps and two sets of wefts. Tied Beiderwand also results in a reversible fabric, but there are no areas of doublecloth. This method requires only one set of warp threads with specified threads (sometimes dyed blue) used to "tie down" the pattern. In the process, fine ribs are created on both sides of the textile. All the coverlets in the exhibition, with the exception of the all wool "Summer and Winter" coverlet in the case, are a combination of wool and cotton. Generally the warp threads are natural colored cotton and the weft threads are a combination of colored wool and natural colored cotton.

The popularity of figured and fancy coverlets waned after the onset of the Civil War due to the experience of war, the increasing mechanization of the textile industry which put commercial hand loom weavers out of business, and changing taste. After the war few coverlets were produced by hand. The traditions encompassed by the early coverlets, however, have reappeared in the decorative "throws" produced commercially today with computerized looms. An example for you to examine is below. 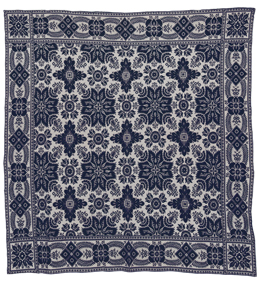