Between November 1912 and December 1925, with a hiatus during World War I between summer 1915 and January 1920, the Gazette du Bon Ton sought to be "the place where couturiers and painters collaborate to compose the silhouette of their time." It was the brain child of Lucien Vogel, a dynamic Frenchman who had studied at the École Alsacienne and had become a force in the fine art edition and printing world. Fascinated by nineteenth century hand-colored engravings from the Journal des dames et des modes, he set out to create a luxury modern magazine that would be the epitome of good taste.

Vogel gathered la crème de la crème of illustrators who worked in a new minimal visual style characterized by strong line delineations and flat color surfaces. He met Georges Lepape, a young painter, in 1911 in a gallery opened by designer Paul Poiret. On display were the artist's fashion plates for Les choses de Paul Poiret vues par Georges Lepape as well as work from his friends Bernard Boutet de Monvel and Pierre Brissaud. The latter was, like André E. Marty, a student of the École Alsacienne, and this group, along with Charles Martin and Edouardo Garcia Bénito, became some of the most important illustrators of the series, which also featured the work of over eighty visual artists. Intended to convey "the most elegant, the most witty and the most novel collection of apparel ideas," these creators not only illustrated the work of leading Parisian design houses, they also designed garments of their own that were featured in plates included in each publication. Produced in limited editions on handmade paper, the series spared no expense and used the pochoir, or stencil, technique to hand watercolor the hors-texte plates.

Through vision and uncompromising standards, the series led rather than followed and helped to blur the boundaries between art and fashion. In 1915, Condé Nast co-published an issue of the Gazette du Bon Ton with Lucien Vogel. During the War hiatus, Nast employed Gazette artists for Vogue covers and, in early 1921, he bought a controlling interest in the Gazette. Eventually Lucien Vogel became the first Art Director of French Vogue and his wife, Cosette de Brunoff, became its first Editor. Henri Bidou, in the Gazette's first issue after the War, wrote quite accurately about fashion and tastemakers, "If we write here the story of dresses, the dresses will write in due time the story of their times." 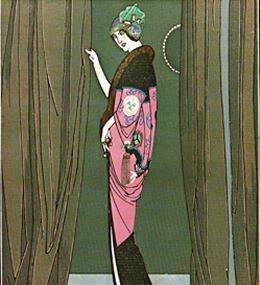