GONE WITH THE WIND: WOMEN, RACE, AND MATERIAL CULTURE IN THE 20TH CENTURY

Gone with the Wind: Women, Race and Material Culture in the 20th Century seeks to explore the influence of both the novel and the film since the publication of the novel in 1936 and the first release of the film in 1939, through documents and objects on loan to the Kent State University Museum for this exhibition.  The popularity of these two works of the imagination does not mask their more controversial aspects, particularly as they depict the complex of American social relationships in the era of the Civil War.

Specifically, the exhibition seeks to question the representation of these relationships and how these representations have affected our perception of ourselves historically and in the present moment.  Written by a woman born in 1900 and steeped in the tradition of the South after Reconstruction, read and viewed by countless women since, what is it in this story that still speaks so forcefully to women of the late 20th century, and is the nature of the appeal the same?  The depiction of racial relations in both works has always been offensive to African-Americans who have long fought stereotypes found in the characterizations.  Have these images contributed to the current racial climate in the United States?  Finally, the exhibition explores the need to possess a piece of this romance that has witnessed a continuing industry in Gone with the Wind ephemera.  Throughout the exhibition, documents pertaining to the creation of the novel and the film serve to emphasize the people who made the stuff of legend. 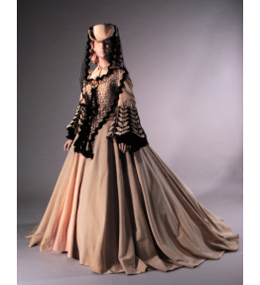