Split between nature, culture and sculpture, hair is a multifaceted topic and a medium of expression that is often overlooked. It can speak loudly and it did when, at the end of the 18th century, democratic ideals caused major social and political schisms that literally changed the face of fashion. By the 1790s, wigs and towering hairdos were going out of favor and new styles rooted in classicism ushered in an era of increased individuality.

Wearing one's own hair in its natural color was part of an ideological and aesthetic revolution. Tradition had called for the wearing of wigs and elaborately curled and powdered hair which was, at first, the prerogative of the elite. By the end of the 18th century, after almost two centuries of wig-wearing, the practice was firmly anchored across the economic spectrum. Made of human or animal hair, feathers and even metal wire, wigs were plentiful and could be purchased new or second-hand in a multitude of styles and prices. They were, by 1790, a symbol of social conformity. Even those that did not wear wigs often tried to imitate their appearance.

Hair that was neither styled nor powdered was seen as extremely informal. If appearing as such in loose-fitting clothing was perfectly fine when one stayed at home in a state of "undress," there were specific rules for appearing in public where one was to appear in a state of "half dress" or, for formal occasions, mostly for evenings and court attendances, in "full dress." Being seen in public with hair that had not been "dressed" was thus a breach in protocol.

The first sign of change was the appearance of disheveled styles. This blatant lack of careful attention echoed the growing love for the natural world reflected in the works of philosophers such as Jean-Jacques Rousseau. The Age of Reason was failing and being replaced by its antithesis, nature and sentiment. Informality in hairstyles, as in dress, became the growing trend of the last two decades of the 18th century. By the 1790s, a new ideal of beauty had emerged.

This exhibition chronicles fifty years of intense changes and explorations. From the frizzy heads with a careless attitude, to the drastically short hairstyles of women and man, to the growing sideburns of dandies, this study explores how ideology, politics, aesthetics, gender roles, nature and artificiality collide to create a unique expression of self. 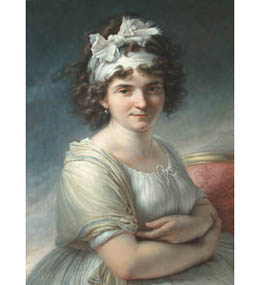