ON THE HOME FRONT: CIVIL WAR FASHIONS AND DOMESTIC LIFE

You refer to Annie’s mourning dresses. She wore black at the funeral, but so many deaths are now occurring at home and in the army, that black apparel is not so generally worn as formerly. It is not pleasant to wear somber black for long periods, and besides it is far costlier than before the war.
— Mrs. Thomas J Anderson to Mrs. James H Anderson. Marion Ohio, Dec 8, 1863

As Americans observe the 150th anniversary of the beginning of the Civil War, the Kent State University Museum will present an exhibit about the material circumstances and domestic life during the Civil War and in the years that followed. Through the display of women’s and children’s costumes, which will be supplemented with related photographs, decorative arts and women’s magazines, the exhibit “On the Home Front: Civil War Fashions and Domestic Life” will focus on the daily life and experiences of the American civilian population during the Civil War. Far from being a simple trivial diversion during such a critical period, fashion provides a unique window into the lived experience of Americans who despite being far from the battlefields were deeply and immediately touched by the conflict. 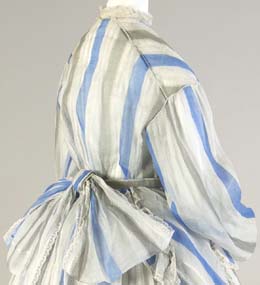