As a new form of genteel undress, tea gowns exhibited early and consistently abundant signs of historicism. By 1873, gowns labeled "robes d'interieurs" appeared with stylistic details that would become characteristic of tea gowns: "Watteau pleats", the draped back pleats set at the shoulders found on the 18th century sack dress, and a center-front panel in princess style which was gathered, draped or heavily decorated and perceived as an underdress. These two 18th century elements were often mixed with other revival styles, a common phenomenon for this eclectic era.

It was in the Victorian era that the seeds of change for the 20th century silhouette were planted. As in the case for most developments in the evolution of fashion, a series of events had preceded the innovative new styles of 1907 and had made minds ripe for their acceptance. The rage for "Japonisme", the Liberty style and years of revivalist tea gown styles combined to set the stage for Poiret's flowing, corsetless Directoire fashions. Victorian tea time provided a venue for fantasy, historically eclectic and exotic garments, comfort, and, coincidentally, a platform for twentieth century fashions. 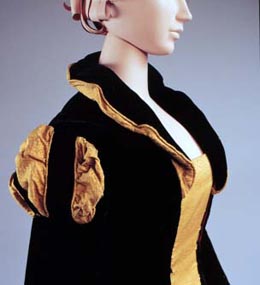