THE HOURS OF THE WOMAN OF LEISURE

This exhibition examines the variety of garments that were appropriate to wear in different surroundings and times of day in the nineteenth century by women who followed fashion and lived a life of leisure. The nineteenth-century witnessed the propagation of periodicals aimed at a wide array of individuals and social classes on both the European and American continents. Within different types of publications, the fashion plate was found to be a popular feature that informed audiences of the changes in styles and was also partially responsible for the dissemination of certain genres. These plates became an important mode of communication that helped codify existing rules and regulations regarding how garments were to be worn and in what surroundings they were suitable.

The women depicted in the fashion plates were not the same as those targeted by today's fashion industry. Instead of the pre-pubescent ideal, the wife and mother was the glorified role model. Body types depicted illustrated this difference well: in keeping with female anatomy, hips, bellies and buttocks were much admired and necessary to attain the fashionable silhouette, as was the bearing of a generous bosom. These components helped to create the illusion of a smaller waist, which was also made possible by the wearing of corsets. Although literature abound describing the horrors of tight-lacing, we must remember that, as is the case today, some people succumb to societal pressures, but not all victimized themselves to an unhealthy degree. Will future generations think we all dieted ourselves to death due to the massive amount of literature dedicated to this subject? Where the nineteenth-century woman used an external aid to achieve a matronly figure, today's population has internalized the process to achieve the ideal silhouette.

With the societal changes that followed the industrial revolution, the middle classes gained greater access to leisurely activities and life-styles. Where European nobility had dictated the codes and organization of social functions in previous centuries, wealth instead of birth enabled individuals from the upper middle class to participate in these activities. Although women still represented a large percentage of the middle and lower class workforce, fashion plates were aimed at those individuals that had attained the much sought-after life of leisure. 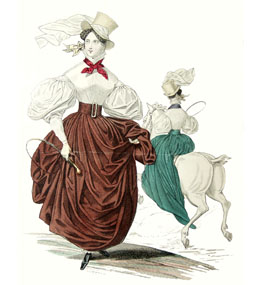