I NEVER LEAVE THE HOUSE WITHOUT A HAT: THE SAVANNA VAUGHN CLARK COLLECTION

Savanna Vaughn Clark has been wearing, collecting and enjoying hats all her life. She has said that she “never leaves the house without a hat.” For Mrs. Clark, hats create a total look and she selects each one to compliment a specific outfit. A generous donor to the Kent State University Museum, Mrs. Clark has given the museum more than one hundred hats. Those selected for this exhibition date from the 1950s to the present day.

A woman of exceptional accomplishments, Mrs. Clark was born in Hutchinson, Kansas, received her Bachelor’s degree from Prairie View A & M, her Master’s from the University of Oklahoma, and did doctoral studies at Oklahoma State. She taught Health, Physical Education, Recreation and Dance at Tennessee State, Southern University, Langston University, North Carolina Central and the University of the District of Columbia where she also served on the Presidential Staff for Management, Retention and Recruitment.

Mrs. Clark has been an active contributor to a number of organizations, founding the Washington, D. C. Capital City chapter of The Links, Inc., an organization of black women dedicated to each other and to civic work. She is a founding member of the Women’s Committee of the National Museum of Women in the Arts, a founding member for the Kennedy Center Friends and Volunteers, Golden Circle and Honors Committees; a founding member of the National Museum of African American History and Culture; Vice President of the Women’s Committee of the Washington Ballet; and Chairperson for the Howard University School of Communications Scholarships. Mrs. Clark is a Patron of the Ford Theater and the Kennedy Center, a life member of the Centennial Circle and the Kennedy Center National Symphony Orchestra. She is also a founding member of the Black Women's Agenda and a Patron of the State Department Diplomatic Reception Rooms. She served on the Executive Committee for YMCA Worldwide Refugee Relief. Her awards and citations include the Lou Rawls Trophy for her work raising funds for the National Negro College Fund, and three listings in Who’s Who: in Washington, Among Black Americans, and in American Education. She has garnered five National Best Dressed Women Awards.

We would like to thank the guest curator for this exhibition, Elizabeth Morgan, graduate student in Public History at Wright State University. 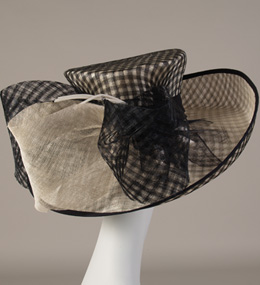