The traditional formal costumes of Japanese men in the modern era continue to reflect an aesthetic that developed as a result of strict sumptuary laws promulgated during the late Edo Period in the eighteenth century. These edicts forced the wealthy but non-aristocratic urban population to camouflage their wearing of luxurious colored silks by using them as linings under plain, dark, but expensive silk garments. This resulted in a more subtle sense of luxury that was restrained and certainly less obvious than that flaunted by the Samurai class. The social repression of Edo Japan had far-reaching effects on all aspects of society, not only clothing. The aesthetic that developed was one of connoisseurship, of the cognoscenti, and the national habit in manners, discourse and dress became one of indirection and discretion. In Japan, as in most societies with severe sumptuary laws, when the rules permitted flamboyance, such as in the uchikake worn by brides at their wedding receptions, the clothing tended toward the extravagantly garish. Along with understatement came systems that established degrees of formality and an understanding of what kinds of apparel were appropriate for specific occasions. For example, all formal kimono must be of glossed silk, and the number of crests on akimono might vary from one to five with more crests indicating a higher degree of formality. The formal haori, or short coats, in this exhibition retain the sense of hidden luxury with brocaded linings worked in gold thread and complex patterns in images that would be known only to the wearer.

When we think of Japanese traditional dress, most of us think immediately of the term kimono. However, kimono is a relatively recent descriptive term and means simply "object to wear." The term resulted from the complexities of Western influence on Japanese traditions during the Meiji Period (1868-1912). The upheaval caused by the "opening of Japan" to the West after almost three hundred years, brought sudden changes in political and social structures. Whereas under the shoguns dress was prescribed and indicated the wearer's place in the social order, once Western dress was adopted for official functions, what had been understood previously suddenly needed to be reconsidered. Kosode had been the term used for the basic garment for both men and women of the elite urban population. With the adoption of Western dress by men within the power structure, traditional garments, now called kimono, were relegated to the status of ethnic dress, and became less and less a part of men's public lives. 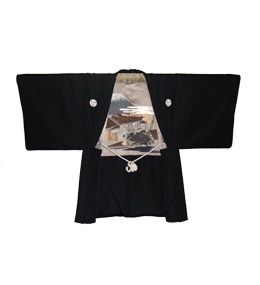