James Galanos always made ready-to-wear, but he made it to the standard of the haute couture, the highest quality of dressmaking. In the history of the American fashion industry, no one has matched the accomplishments of his 46 year career.

From childhood Galanos knew that he wanted to be a fashion designer, but it was not an easy task to establish his own business, one that would allow him total control and thus insure that each garment would meet with his approval. His route to success took ten years and wound briefly through Traphagen School of Fashion and Hattie Carnegie in New York City; the movie industry at Columbia Pictures working under Jean Louis; a time in Paris at Robert Piguet; back to New York to work at Davidow, and finally, a return to Los Angeles. None of these positions satisfied him and none allowed him the creativity he sought. At last, in 1951, he found a sympathetic buyer at Saks Fifth Avenue in Beverly Hills who gave him his first order. In 1952 he was able to incorporate his business, Galanos Originals, and over the course of his career he never ceased his vigilant pursuit of quality. Many of his clients noted that the inside of his garments were as finished and beautiful as the outside. James Galanos retired in 1998, and has now turned his creative energy to photography.

As a designer, he began with the fabric, shopping mostly in Europe. Throughout his career he worked closely with a head tailor and a head dressmaker, giving them a sketch or concept with which to start the design process, but ultimately he draped the fabric on a house model to finalize the design. The extraordinary beading and embroidery found on Galanos designs was, for the most part, done by D. Getson Eastern Embroidery in Los Angeles with whom Galanos worked as closely as with his own staff. In the introductory essay in Galanos, the catalogue from the exhibition at the Western Reserve Historical Society and the Los Angeles County Museum of Art, Barry Bradley writes that Galanos, when persuaded to speak about his creative work, ". . . becomes almost lyrical. He speaks of the satisfaction of working with the fabric, of having something take shape under his hands, to the excitement that occurs when something happens in the draping. . . ." In the same publication, Bernadine Morris, the former fashion editor of the New York Times, writes that Galanos "brought brilliance and quality to styles meant to be bought off the rack." She credits this as his major contribution to the American fashion industry.

The Kent State University Museum is fortunate to have more than 120 different garments by James Galanos in its collection. This exhibition is only a glimpse of the remarkable talent of this creative American. Alicia Vangilder, a senior Fashion Design major, developed the exhibition as an Honors Independent Study. Alicia selected the garments, drafted the labels, drew the flats and assisted with the installation. I am most grateful to her for her excellent work. 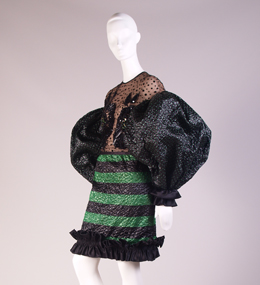